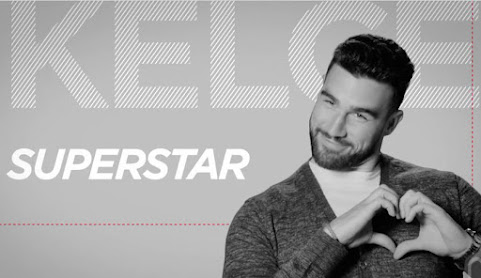 This is a marketing move and a sponsored content deodorant commercial but the message still offers a nice glimpse at camaraderie and football heroes working with one another despite their differences in order to cash EPIC checks and spice up their public relations profile . . .

“It is just a beautiful way to get people to start to discuss the matters that are at hand socially in this world,” Kelce said. “I think it’s my job as a white man to be able to step up and say, ‘Listen, something is wrong here. How we are viewing the African-American people is wrong. How we’re treating African-American people is wrong.’ And, there needs to be something that’s done about that.”

Kelce, the only white player among the group, encouraged more people to talk openly about stopping racism.

“It’s important for me because of my upbringing, the people around me that I love, that I cherish as friends, as family, people of color,” he said. “And it’s been something that I’ve seen as a kid. And it’s very upsetting.”

Still, our discussion is for adults and not youngsters, and so it's worth noting that Kegger Kelce recently reconciled with his GF who is OBJECTIVELY HOT beyond any demographic distinction.

So, at the very least he practices what he preaches on the high end.

Fox4: Chiefs' Kelce among NFL stars who spoke out against racism in virtual chat with students

WTF? Speak for yourself, you patronizing pampered athlete. If you spent less time guzzling beers in public and partying in Las Vegas, maybe you could actually lead by example!!!

Kielce is a stupid, drunken football player obviously suffering from too many concussions and too many beers. His only value is what he does on the football field.

That asshat has to have CTE


Maybe Travis needs to look at the racism of blacks against whites, hispanics etc.

It's truly horrifying the level of racism that exhibit.

And to say blacks have a right is wrong when they screaming everyday when they don't get their way that it's.....racism!!

We get it Kegger. You are fucking a black chick. The ghetto hoe is only after your money.

Kelsey, what we have here is not systemic racism by the police but systemic arrest accidence by black thugs. Nothing worse than a white man telling other whites what to think and do. No one cares what comes out of your mouth and screwing that black bitch doesn't give you a license act black.

Kelce how about you just STFU

Kelce is playing his "get out of jail free card" for social justice, he's under the umbrella and protected now. Meanwhile what is the homicide rate in KCMO for black on black deaths, Kelce? Haven't watched any Chiefs games this year beyond the opening show of the first home game. I turned off the tv for the season when Patrick started his lecture on the field.

He's just saying this so the disproportionally black defensive backs and linebackers in the NFL don't hit him so hard. He needs to stand up for more races being represented on the football field based on the country's demographics. It's just plain wrong that so many black players are getting most of the opportunities to get on the playing field. If we're going to demand it in the boardrooms, we need to demand it on the playing fields.

He dates a hot black chick who probably doesn't like black guys so he's a freedom rider. He doesn't fill up his mercedes on Van Brunt I'll bet.

Racism only exsist in the minds of race hustlers and H8 mongering predjudice blacks.