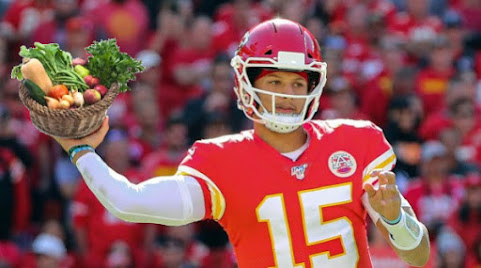 Super Bowl–winning Kansas City Chiefs quarterback Patrick Mahomes presented his pal and teammate Tyrann Mathieu with a PETA Humanitarian Award in honor of his efforts to save dogs from dying of heatstroke inside parked cars in the summer and freezing in backyards in the winter.

“Being in the NFL has given me some amazing opportunities, but the most important one is using my platform for positive change. I have a teammate who is doing just that. I am so proud of the videos he’s done for PETA, working to get animals out there treated with respect. He is not only an asset to our team but to animals who need protection,” said Mahomes in his presentation.


This guy Mahomes is such a hypocrite. He's helping with PETA but neglects the BLM community he disrespects the country for. Any of you who are fooled by this Oreo PRICK deserve to be in the ditch you're stupid as hell. He won't do any better for his own kid either.

^^and yet Mahomes is the best player in the game, a terrific asset for our community, charitable with his funds and time, and a terrific human being. You? You’re here. He wins!

@2:17-Mahomes is a fantastic person, you’re poor white-trash. Mahomes is a terrific role-model for our youth, you’re a broken busted, bitter, broken bitch. Everyone loves Mahomes, your whole family hates you. He wins, you lose every day. Weird.

Would you rather support a cute lab puppy or a loud mouthed black woman with a bad attitude?? Hmmmmm??

Valid point Charlie, but could the stupid punk Duh-homes wait until after the season to do all his extracurricular bullshit?

^^I don’t know Charlie, you support your wife and she’s a BBC whore so...

A very, very, fine line between what you do from the heart, and what you do when you blow the trumpet so all will see you drop money into the plate. More than anyone, the public and the charities that "trumpet" the "2 mill" should know that the widow that gave her last 2 copper pennies, have given far more than those who did it to signal their virtue. Their reward is at the cocktail party, not in heaven.

I think mahommes is a fool to associate his good name with goober brained radicals like PETA. That group has broken into labs and released virus challenged animals into nearby woods. Could easily cause a pandemic by their moronic actions