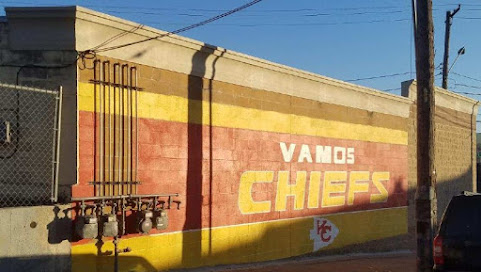 Super Bowl champs are off to a good start today and this post is just an excuse to share a look at Westside tribute and something hopeful for Sunday as Kansas City's team looks impressive heading into the playoffs.

The Kansas City Chiefs travel to New Orleans for the first time since 2012 for their Week 15 contest against the New Orleans Saints. Sunday's matchup has been billed as a "Super Bowl preview" as both teams are vying for the No. 1 seeds in their conference.

Travis Kelce is the unanimous No. 1 tight end in Week 15, according to the CBS Sports senior fantasy football writers. Kelce enters the game as the league leader in receiving yards (1,250). If he ends the season atop the list, he would be the first tight end in league history to accomplish the feat.

When the Kansas City Chiefs took the field on offense for their Week 15 matchup against the New Orleans Saints, they had two changes to the starting offensive line. The right guard position was filled by veteran guard Stefan Wisniewski, while Andrew Wylie - the usual right guard - started at right tackle.

Careful. Putting to much "hope" in sports always leads to disappointment.

^Says the geezer whose whole life has been a disappointment.

That garbage wasn't funny the 20th time you posted it and it's not funny now.

I didn't vote for either one of those clowns but I'm somehow glad that the election is giving you constant indigestion.

Take a tums, and then a mint. Because you stink.


The chiefs are anti American traitors and so is anyone who supports them they are also RACIST morons who can't do anything better than to steal and spread hate.

^^and yet they're not, they're the best at what they do, and you're a broken, busted, bitter geriatric fucktard who will be dead soon! Yay!