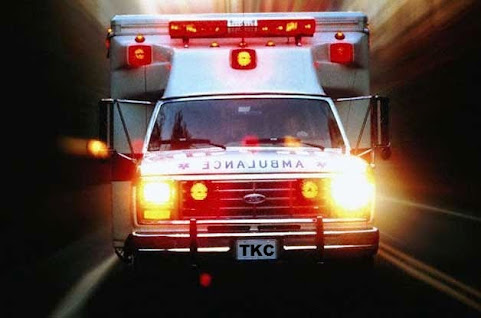 My 2nd favorite British multi-millionaire offered an important bit of wisdom when he sang . . .

And that brings us to this local story . . .

Police were able to quickly stop a woman who stole an ambulance Saturday afternoon, but then she asked for an ambulance for injuries she suffered in an apparent separate incident.

Firefighters from Station 10 at 1505 E. 9th St. reported the ambulance stolen at 2:22 p.m. Nov. 28. They had left it parked outside the station. Fortunately, KCFD ambulances are equipped with GPS trackers. Dispatchers advised officers the ambulance was in the area of I-70 and Paseo, according to the GPS.

Officers located the ambulance at 17th and Van Brunt and tried to get the driver to pull over. She finally did so at Truman Road and White Avenue. Officers were able to take her into custody with no further incident.

The 27-year-old woman then complained of minor injuries to her face from a separate incident and asked to go to the hospital. She was exhibiting signs of narcotics use. A different ambulance came to transport her to an area hospital. Fire Department personnel took the ambulance back, and investigation is ongoing

But she be needin' her a Bambulance!


I don't know about anyone else but I think this is funny!

^^ A Dipshit would. Not considering the potential life lost of an actual person needing the service or the total costs wasted of this "FUNNY " incident. I bet Jackass videos and Borat movies are high on your priority list. Give your wife thee ol Ditch oven and laugh about it at work when you return. Weird

^^ Get a sense of humor Karen.