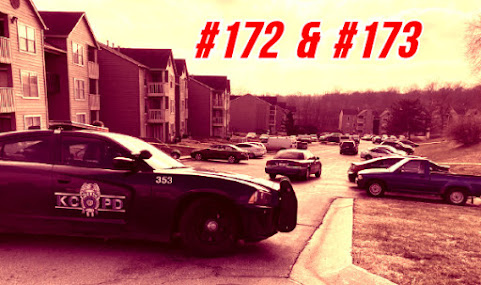 A double shooting in broad daylight spikes the local homicide count as the RECORD BREAKING KANSAS CITY MURDER RATE continues to skyrocket at the end of the year.

This tragic crime scene keeps the rate of killing about 20% higher than last year at this time.

Here's the narrative from KCPD carried by local TV today . . .

"Officers were sent to the 9300 block of Bales Avenue in the Canyon Creek Apartment Complex after dispatch received multiple calls reporting shots being fired in the area. When police arrived, officers found one man and one woman suffering from apparent gunshot wounds outside of an apartment building -- both deceased. Investigators believe there was some type of verbal and physical fight before the shooting. Witnesses reported hearing 15-20 shots."

Fox4: 2 people killed at apartment near 93rd and Bales in Kansas City

Could definitely pass 180 if we don't get things under control.

^^^ And yet things haven't been under control all year. Weird.

We've got time to give away free housing but can't get people to stop killing each other so they can enjoy the giveaways.


I used to live at these apartments when they were first built. They were and had the best of everything not cheap windows and doors or fixtures. They had a nice clubhouse, pool and nice people lived there. They started going down hill when the blacks came over from the nasty side of Bales and started stealing everything. Some people woke up to their cars sitting on cinder blocks. They tried to steal the wheels off of my mustang but they were locked and couldn't get them. People started to get lawyers to get their lease broken and moved. That's when the place went down and so did Bannister Mall. There was only one white trouble maker and he was a peeping Tom. This place made a good living for the BLM for awhile because everyone had a nice car and nice stereos to steal.

Woo hoo, 173! Meanwhile, in the major leagues, Baltimore has 319 murders and Chicago has 756. St Louis is of course kicking our ass like usual with 250 murders. We are third rate as a murder capital.

Same general area as the doorbell cam shooting just to the East. Very high crime area...anywhere there is a police station there is rampant violence and crime in urban areas. Violence begets violence.

5:01 that is a post hoc propter hoc fallacy. Take a look into the planning that goes into locating a new police station. Violent thugs perform the violence. Peters doesn't prosecute and the judges don't punish. No diversity, no crime. Weird!

saw a blurb on the CBS news site listing the U.S. cities with the highest murder death to population ratio.

And in the top 25 for worst places to live! Hahaha!

190 homicides is attainable if the hoodlums carefully aim and gently squeeze the trigger like each bullet cost $1,000. But given the low IQ of KCs urban retards, it will pass 180 homicides but not 190.

Does BLM paint a pink and red X to commemorate this occasion ? In parking lot or in street ?

And yet nobody but TKC CHUDS care. Weird.

After ten years as the worst prosecutor on planet earth Petersucker has come to a conclusion. Yay! She’s going to save us all with her brilliant examinations! Stupid bitch.

Maybe it’s as simple as having a prosecutor that will do their job, just sayin.


Why isn't Patty Cakes and Klark Kunt patrolling KC streets to ensure they are safe from all these police shootings ?

They had signs in the taxpayer funded Arrowhead Stadium to end racism and pissed on the American flag during the playing of the national anthem.

I thought kneeling during the national anthem and renaming streets and water fountains was supposed to end the shootings.

^ You should hook up with Patty Cakes, CHUD Boy.

5:09pm You clearly don’t live in Kansas City. No planning went into relocating that police station. It used to be located at 63rd Street and Garfield, and needed to remain there. That’s the location where little Tallifero was murdered in the Citadel. Police stations were relocated due to politics and nothing else. I’m an insider on this topic. Any planning that occurred was merely paper pushing, not real community, strategic planning. And that’s how pretty much everything is done in Kansas City, Mo. Thanks for playing.

Are we stating that once again BLM members committed a murder ? That is Racist.