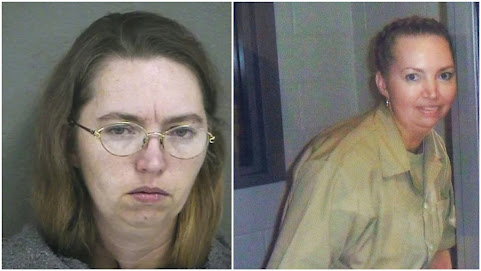 Insight into the fight to save a convicted killer lady risks forgetting the merciless slaughter she committed not so long ago.

Daily Mail: Judge delays execution of womb raider - the only woman on federal death row - after it was unlawfully rescheduled by the DOJ

That means Montgomery's execution could be pushed to when Biden, who opposes the death penalty, takes office on January 20

This another example of the dummocrats lack caring about the two victims of the terrible crime. This lady deserves NO mercy.

Only because illegal / criminal activity is the Number 1 priority of the left. Drugs, aliens, criminals, pervert sexual practices by deviant people or saving a killer to become their next hero. Weird-Taste the Rainbow

I am not sure what should happen here, but there is a trend in the coverage.

NO ONE TALKS ABOUT THE VICTIM'S FAMILY.

Q: When Lisa Montgomery was offered her last meal before execution, what did she tell her female prison guard?


Q: When the guard brought her final meal to the cell, along with fork and spoon, what did Montgomery say?

Q: When the guards forced her to walk a gauntlet toward the gas chamber, what did Montgomery exclaim?

I'd bet this judge's real goal was not application of law to the case, but rather to delay the execution until January 20 or after. The jury heard the evidence and recommended the death sentence. The judge can't overturn the jury's sentence directly, so he's using a smokescreen to do it.

Think about the child. (now an adult) His birthday is his Mom's murder date. And he wasn't even "born". He was cut from his Mom. He should decide what happens to Montgomery. Yes the "baby/now adult" should decide if, when. how Montgomery died.

Lets go back to that kind of justice. It would be a deterent to crime

Someone has to pay for the crime. if the judge wants to take her place, thats fine with me. but the crime deserves punishment. Prison is not punishment. Its a luxury hotel compared to living conditions for law abiding citizens in africa

Her attorneys "fell ill" with Covid on purpose, to get her execution delayed - is my opinion. Since when does a attorney's illness cancel a execution?

The child is a girl who just turned 16. She and her maternal grandmother, who found her daughter dead in a pool of blood, should decide.

Funny . Like in a human died due to this POS and it's a joke to you. Funny would be if tragedy comes to your door, see if it's funny then. Obviously you have never had a family or friend killed by someone as ignorant as you or her.

This lady deserves to die. But her attorneys used their own Covid, and the judge used a "technicality" to prevent her execution (aka Justice). Just because Montgomery was born without a male sex organ, doesnt mean she should not die. If the murderer was a man, nobody would be pulling this stupid stuff to save her.

I saw a Wyandotte county Judge lost her parents in a wreck on Christmas caused by a stolen car. Maybe that Judge will now take a harsher view of car theft and eluding police in a chase. Some people can't imagine heartache until it happens to them. Cause they live in a "perfect world" and have been lucky. Judges need to get serious about crime. Everyone is unhappy once they are caught and behind bars - but that doesnt mean they get off easy.

This is why we have to pass mandates in sentencing. To many activist in the judiciary.