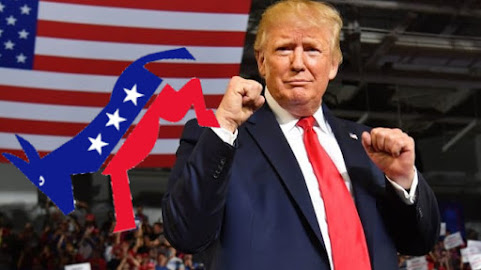 In their own words, here's a worthwhile statement and roundup just shared by this town's top ranking Democratic Party group . . .

On a straight party-line vote, the House Special Committee on Government Oversight on Dec. 14 voted 6-3 in favor of a non-binding resolution calling on Congress to reject the presidential election results of six states won by former Vice President Joe Biden, a Democrat, as part of a far-fetched attempt by Republicans secure another term for President Donald Trump, who lost both the national popular vote and electoral vote by wide margins.

However, the full Missouri House of Representatives adjourned from its special legislative session on Dec. 16 without taking up the politically motivated measure. The House had been expected to end the session Dec. 10 but extended it at the behest of 67 Republican lawmakers who signed on to resolution. The measure died when the chairman of a procedural committee that also had to approve it prior to House debate said his panel would not meet.

The government oversight committee vote took place on the same day the Electoral College met in state capitols across the country to formally election Biden as president. Biden won 306 electoral votes, while Trump garnered 232, including Missouri’s 10 electoral votes. Congress will take the largely ministerial action of certifying the Electoral College results on Jan. 6.

House Resolution 2 urged Congress to reject in the electoral votes from Pennsylvania, Wisconsin, Michigan, Georgia, Arizona and Nevada, swing states won by Biden. During a contentious three-hour hearing, HR 2 supporters offered no evidence of fraud that would justify overturning millions of votes in those states. Trump's personal attorney Rudy Giuliani who appeared via videoconference, was the primary witness but only offered debunked and unsubstantiated claims that already had been rejected by dozens of state and federal courts across the country.
###############

Rep Barnes does realize he represents a meaningless district on the east side of Kansas City, right? Therefore, his opinion counts for zero.

As one columnist put it, "Trump isn't doing the job he says he wants.

Instead, he tweets about John McCain.

^^^ and the failed 7 impeachment attempts with the big fail during the plandemic they planned with CHINA amirite!

Poor ole Jerome, he really is in a worthless and meaningless district, how else did he get elected?

I remember this EO two years ago, thinking at the time it was just to placate all RUSSIA! RUSSIA! RUSSIA! hoax. Pres Trump knew these shysters were up to no good. Slipped this EO right under their noses. This comes from decades of doing business in slimey NY. But of course, he's the dumb one. If this goes the way I've been shown it may get ugly. It'll be time to saddle up to save the Republic. Hope enough of us are willing. That's 'merica!!

Everything the Dems have accused Trump of are guilty themselves. What's the Marxist motto? "Accuses your enemy of what you're doing, as you are doing it to create confusion."

@senatemajldr and Republican Senators have to get tougher, or you won’t have a Republican Party anymore. We won the Presidential Election, by a lot. FIGHT FOR IT. Don’t let them take it away!

I was kidding, but he said it AGAIN, only four hours ago. What a nutjob.

He's not right about winning the presidential election.

"If we had confidence that the president clearly did not commit a crime, we would have said so,"

Charging the President with a crime was "not an option".

The Republican party is a fucking joke. It's a cult now scared of tweets from a fat, orange, dead ferret on his head, diaper wearing, adderall addicted washed up reality show host.

yet, weird Super Dave, Democrats haven't been arrested for shit, yet, Trump's orbit......awfully fucking dirty. Don't worry, as long as you don't implicate the grifter in chief, you'll get yourself a pardon.

Losers. Enjoy watching that fat fuck saunter out of the WH.

Republicans only about the deficit when there's a Democratic President that they want to obstruct.

I remember Paul Ryan shooting down a job bill for veterans because he was worried about the deficit.

Yawn. More ad hominem. Which, as far as Trump goes, is all you've ever had.

Meanwhile, without the unifying force of Trump-hate to hold it together, the Democrat party is disintegrating.

Enjoy! Your political insight is on par with that of a downmarket insult comic.

3:18 have you been awake or just confused the last four years? You truly are one of those dimwit fuckers aren’t you! Hahahahaha!

3:05 Trump hasn't been arrested either. Your point sucks as always, typical lame democrap come back. Weird.

I could list many a democrap that should have been arrested and still hasn't been but your feeble mind wouldn't be able to comprehend any real talk.

^^^Should of, could of, would of. If ifs and buts were candy and nuts, democrats would've be arrested.

3:23 - tell me what's ad hominem about the fact that soooooo many people have been arrested and charged with stuff (and of course some pardoned) that were in the Trump orbit. And there's nothing ad hominem about calling Trump fat, orange, a diaper wearer, an adderall sniffer, etc.

I don't think we'll ignore Trump after he vacates office. It's not like ol Trumpy dumpy to just fade into the shadows. Narcissists need attention. We'll have some fun at his expense.

There are still people out there with TRUMP DERANGEMENT SYNDROME. AND TRUMP WILL BE MORE powerful out of office then IN he,Has 78 million followers And Independent Media that will be covering him 24 seven and when China Biden tries to take the country Communists. A HUNDRED million will be upset with Sleepy JOE. Biden can't bring back employment in ten years. The factory's are ready to move out of the country again .

This is why you fail. You literally don't understand what ad hominem means, and you beclown yourself mightily. Empty insults about Trump are literally ad hominem; they're attacks on the man rather than any positions or arguments.

This style of sub-argumentative behavior is generally seen as weak, for the obvious reasons. It takes very little to attack a person, but if you engage with a person's opinion you may have to work a brain cell or two.

Happy to help. Spare yourself further embarrassment and do better. ;)

Aside from the asterisk of massive and obvious fraud.

They arent democrats, they are communist.

I wish to thank the media from the bottom of my heart. My son is sometimes not too bright, like leaving a laptop at a repair shop, with certain data on it. But the love and admiration shown to me, by the networks and most cable news, means we can move ahead without fear from investigation. My new attorney general will not be interested in Hunter's very successful business dealings, nor his taxes. Again, I thank you media anchors and the New York Times for electing me, and not worrying about my occasional slight dementia and sometimes not knowing where I'm at.

Our votes have been stolen for our President due to the Democrats fraudulent votes. It's been shown on news stations that do true journalism. The radical Democrats knew Biden could not win without cheating. So be mad all you want because we're NOT going to take cheating sitting down.

Barnes has done nothing and I mean nothing for our district other than
collect a paycheck.