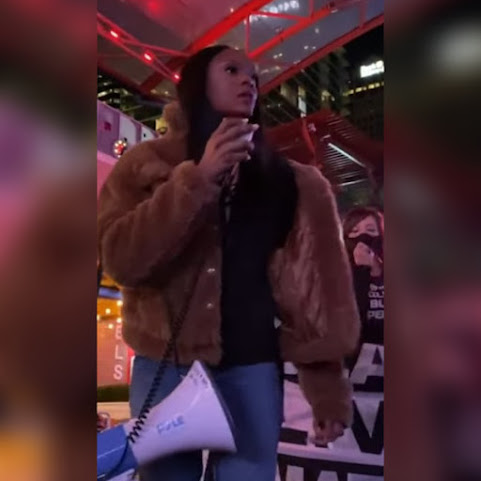 Without question KJ Brooks is the Kansas City power player of the week.

She earned international acclaim with a viral rant against the Kansas City Police Board calling out po-po in the crowd and targeting supporters of KCPD Chief Smith.

As we noted previously, her megaphone commentary has earned notoriety among local protesters for quite some time.

To wit and mostly silenced by the local news . . .

THIS WEEKEND KJ BROOKS AND 'BLACK LIVES MATTER' PROTESTERS SHUT DOWN THE P&L DISTRICT AGAIN AND CALLED OUT DOWNTOWN PATRONS!!!

Her speech offers a litany of observations in a powerful display wherein she screams at the top of her lungs and seems to bring all of the P&L District Live Block to a standstill for a moment.

There are many highlights but it was interesting to hear a smattering of applause from a few P&L District patrons along with an expression of solidarity with the Overland Park family of John Albers who was shot dead by police a few years ago.

Moreover, and this is important, she reminds locals that protesters plan to continue their downtown KCMO social justice demonstrations every weekend until their demands are met.

And so, because MSM politely ignores this appeal and its warning, KJ Brooks gets the last word on Kansas City Sunday night as we share this clip featuring more than 10 minutes of unfiltered advocacy and a pledge of more disruptions in the very near future . . .  .

Dinner and a show, sounds fun!

The sjws are intent on killing downtown.

The attractions are nice but I don't think people want to be accosted while they're spending hundreds of dollars for a meal. KJ shows us that she doesn't frequent this place very often or she would know that dinner costs a lot more than 50 bucks.

At least about the cost.

I guess since they've driven everyone out of the Plaza, next stop P&L.


I started to watch this persons video but decided this crap is getting old. I will have to say one thing she's right on.....She's not a nice person just like she said she's not.

I love how she says she would rather be at a club right now. Oh you mean like Ultra9 where they can't seem to stop shooting each other. But wait, we're talking about police brutality not black on black crime. Wrong narrative, sorry.


didn't Disturbing the Peace used to be against the law?

She is doing the right thing, she is using her freedom of speech. If P&L District takes taxpayer money then they must let the people speak!

Let’s gather in your basement next time “increase the peace.” Be sure to “increase the grease” and lube up, you’re gonna need it when they screw you and your night up, just like they did in this crap video.

Moron of the year nominee. Could not be less relevant.

Can't she be arrested for "Disturbing the Peace"?

How long are we going to put up with harassment and social terrorism from this loud-mouthed bitch? Freedom of speech is one thing, but her misbehavior goes way beyond that. Hey, is Stacy Shaw and her team gonna bail her out, too?

Megamouth needs to take her message to the hood where the majority of black murderers live. The people trying to support local businesses and enjoy their meals in peace are not responsible for the things she’s caterwauling about. She’s a public nuisance.

I believe this is part of the Mayor's plan to get more affordable housing. Housing prices and rent in the "good" part of town should be falling like a rock.

Isn’t this the same chick who couldn’t walk during the tent protest and the same one who just got arrested again and also just had a baby? Where be da baby during all this? Did cops already snatch her money maker?

Ha! A couple days ago, Brandon Tatum showed this silly grilly's shrilly rant at KCPD on his YouTube (over 1M Subscribers). He said she sure hates on whites while appropriating whites with that straight hair wig! He asks hypocrite KJ, where's her own curly hair?

She gone done it now, she done crossed the line, nobody messes with the last good or decent thing left in killa kc, oh she gonna git it now!

Better order some lumber and plywood to board up P&L District's windows.

Wow, the Marxist Democrat Party is destroying everything in Kansas City.

Kansas City will definitely go bankrupt as no one is going to spend their disposable income to be verbally or violently attacked in downtown KC.

There goes the sales tax and earnings tax revenue that KC is dependent on.

Can't believe the Kansas City Chamber of Commerce is allowing this to happen.

Vote for Joe Biden if you support higher taxes, $5 gasoline, murders, looting, arson, boarded up windows and a destroyed economy.


87% of the country is allowing 13% of the country's population destroy America. Incredible. Get over the white guilt and being called a racist as we are allowing our neighborhoods, cities and country be destroyed by the Communist BLM.

Another piece of evidence that social media is destroying America. The goal is to get a big enough social media audience to make serious cash. Forget imposing on other people's rights and disturbing the peace. When cold hard cash is involved, it's every man and woman for themselves. Screw any kind of decorum of proper public behavior.

Mayor mcdumbo is letting this all happen, he’s not man enough to put a stop to this shit. George soros must’ve given him a lot of money and made some big promises to him about his future, I don’t doubt for one minute that he’s been bought and paid for. I’m guessing Petersucker is throwing out all current charges and all future charges because she’s bought and paid for too.


so..does this chick even have a job? is she a "professional protester"? who pays her?

In my entire life I have never ever treated anyone as less than myself and definitely not because of their race or color. But I am now saying this: The behavior of this woman, Stacy Shaw, and non-peaceful protesters I want you to know I personally have reached my limit. I am not a racist but if you want me to be one then keep acting like you are acting. I respect my friends and they come from every race, creed and color. But if you idiots want my respect you had better earn it now. Start acting like you want to be treated well, like you are a good member of society, like you can be respectful of me and my family. Acting like tugs and morons isn't cutting it anymore. The Fat Reverends need to start preaching this to the black community because I believe the Hispanic community understand it already.

Don't see what the fuss is about. This is a public space funded by taxpayer money. They have a right to be heard! I think KJ is speaking up for all people. God bless her and God bless our freedom of speech in this great nation.

11:07 doesn't even realize how racist he is, or how his narrative is the essence of White Privilege. He's telling others what the rules are. Even though demographic has different rules that they're expected to follow, to assimilate.

Assimilate into what? White culture?? Why?

He's "reached his limit", even though no one has actually done a thing to him. It's just that watching the news upsets him.

As the Dred Scott ruling noted: Our Constitutional Rights were never meant for non-whites. Everyone knows that open carry & stand your ground is only for whites.

We've already decided that you may discriminate against homosexuals on religious grounds. This is, euphemistically called Religious Freedom. Does anyone in officialdom care what the homosexuals call it? I'm sure it isn't Freedom. Seems like religious tyranny to me. Now, that six of nine Supreme Court Justices are practicing Catholics, expect a lot more of this.

She's half the size of Stacy Shaw. Stacy Shaw will wrestle her down. Stacy may eat her.

Blahaha! Broken record with a bad weave on top.
No worries. She'll burn out and fade away.

Snore. She's no good at 'tall without a script. What a letdown. She needs a Biden monitor.

^^12:07 -- Clearly, 11:07 asserts that the same rules for respectability apply to all races. The top rule is: Show some class, not your ass! How would you know if "no one has actually done a thing to him"?! Plus, the commenter could be a her? And, holy crap, you broadbrushed Catholics with your last statement!

Is she George Soro's love child? Oh gurl, did I saw that? Oh gurl!

22:07...racist? Tough. There is plenty of reason to be racist, starting with your bullshit

When will she get arrested for shanking someone on a street corner or killed by a bro while loitering at a C store on a Friday night ? Bet her future is more like the previous statements than an achieving political /activist career of the present. The arrested pregnant basic bitch fail from grace rather quickly. So did Walter Wallace.

She's not very "well-spoken" for a hood activist.

Your leader of the day. Hope she fits other criteria . The only criteria to make leader of the day. Make her head of Kc's new LGBT department. Better yet, head of economic development of all our funds. Her skin is darker than mine, so she deserves it. IF you find a person that fits 3 criteria of the day. They can beat her out. Maybe an indian tranny with one leg and a family legend without documentation of an african american slave great great great great great grandmother. Or just hang outside a hottopix or starbucks and grab the first rainbow warrior. Your city deserves the best. You have to fit in, maybe move to Brookside and put a sign in your yard to support diversity.

Black privilege and frailty on display.

I wonder how the hispanics, western and eastern people of europe, asians, native americans and every other non black feel about not having a voice in Black only allowed voice Merica 2020? The world will never know.

Coon season opens in less than two days. No limit or tags. Bounty on KJ.


So, I watched the stupid video (that's 10 minutes of my life I'll never get back). Didn't see any footage of this loudmouth entitled barely literate ingrate actually criticizing black-on-black violence. Her only anger is at those trying to protect her freedoms. Not surprising she doesn't respect the P&L patrons freedoms. Or the livelihoods of her neighbors who depend on jobs in the P&L zone.

Kansas City black community: Get new leadership, or keep the one you have. Either way, you'll have the leadership you deserve.

Isn’t there a noise ordinance in Kansas City? A megaphone?

12:07. The Dredd Scott decision is considered to be one of the worst rulings in Supreme Court history. It is one of the factors that led to the Civil War and it was voided with the adoption of the 13th amendment to the Constitution in 1865. That was 155 years ago. No one who was alive then still lives today. The Dredd Scott decision is not relevant to anything today except as something to be taught in history textbooks. You obviously have never even read one or you would not be so confused about it.

TOP PHOTO -- SELF IDENTIFIES AS A VICTIM

This confused, angry, ignorant, immature, self-absorbed young woman who is from Atchison, Kansas (not KCMO) is voluntarily choosing to play the VICTIM because it's the cheap way to get the attention she craves. She's made a tactical error and will self-implode after her 15 minutes of fame!!!

You eating at Guy Fieri's Taco Joint, then you get what you deserve.

She needs to go back to Atchison. Trash.