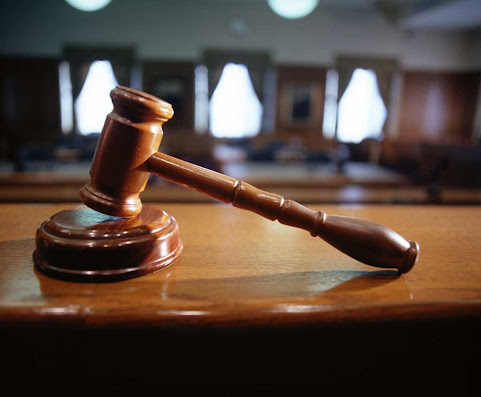 From behind their paywall, The Kansas City Star has joined "rent strike" protesters and declared war on Jackson County Judges.

CHECK THIS NOTE FROM THE JACKSON COUNTY COURT PUSHING BACK AGAINST THE SO-CALLED PAPER OF RECORD!!!

Here's the money line in a Statement of 16th Judicial Circuit Court that seems to contradict most of the arguments from KC Tenants and the newspaper . . .

"In addition to being based on misstatements and half-truths, the Star’s recommendations ignore a judge’s most fundamental obligation–to decide cases on the basis of the law and the facts presented to them. Providing adequate funding and other resources for the Public Defender system and making changes to the landlord tenant laws are issues for the legislative and executive branches of our government –branches that have the ability to make and carry out policy by enacting legislation and issuing executive orders. Judges do not have this power but are instead obligated to decide cases and make decisions based on the law and facts as they are –not as the judge may wish them to be. The Star’s editorial ignores this fundamental principle and asks voters to do the same thing."

Read the statement in its entirety.

feelings, feelings are more important than any laws...

Pay up or pack up. Your choice.

The 16th Judicial Circuit Court has NEVER rebuked Tony’s KC. I know where I’ll go for my news.

The commie red star just got their ass handed to them further proving who’s side they’re on, and it’s not the law or law abiding citizens. Pieces of commie trash is all they are and represent.

No surprise that the RED Star is mystified by the Separation Of Powers and thinks that OF COURSE judges should make laws and legislate from the bench.

The Star doesn't have any idea at all about the law and the "reporters" certainly don't pay any attention to facts.
They have a narrative which advances their fantasy of being "woke" and every bit as "progressive" as Brooklyn, New York and whatever "stories" they pursue are tailored to reach the conclusions that they've already made.
Even worse are the childish amateurish editorials which are terribly written and desperately try to tie together as many disparate ideas as can be found to reach their off-the-wall conclusions.
The Star's teary-eyed concerns about the public defenders system doesn't offer any independently-examined facts, but simply takes whatever anecdotes are told by people in the system and uses them as facts.
The Star isn't even taken seriously by the people who work there.
Sad.

That shit rag must be getting legal advice from Stacy Shaw.

Yet you guys keep complaining that Judges who are lenient on criminals need to go. Actually its about time that all the Judges be voted out to let new ones come in, and if they don't want to be tough on crime, they can be voted out to.

All of a sudden liberal judges are bad in the eyes of liberals when they actually get something right. Nothing is free. Pay your bills or pay the price. Tent city has openings now.

Bitch slapped by the activists...wow, how far left is the Star?? I wouldn't wrap fish in that rag..

I wouldn't wipe my ass with the Star when there was a toilet paper shortage. Didn't want a rash.

The star used to understand how the courts worked. Now they are just playing a political game.

Only give it half truths till court was never here because the court refers to hear the entire story. You talk about feelings, I talk about how your parents wanted to create you.

You have your opinions but in reality. Unless you are approached by someone and you should just never give your opinion about a situation that you are unaware of. Because that’s only hurting your reputation overall.

Attorneys can be available at any time but that’s up to the attorney if they choose to serve or not. Attorneys was always available 24 seven to give guidance on any type of situations can you might want to listen to a situation of when you don’t know of what other people are talking about you of Or what other people are saying about you. Because there was truthful attorneys out there that will give their truthful opinion as long as you’re willing to listen to them. I’m not talking about a judge and I’m just talking about a straight attorney.

The Kansas City Kansas community college may just give us a write up form for involving the college but due to the situations with Alfonso Brooks. I also have alibis of where I was at in 2004 and don’t start drama with me.

But also May not call their campus as campus police but ask campus security.

That campus security already had a previous background check completed by the board of police commissioners of Kansas City, Missouri before any licensing was issued.

But before any licensing was issued to campus security and the board of police commissioners of Kansas City, Missouri has already completed the background check but doesn’t serve the general public.

But before any type of licensing was issued to campus security and campus security has already had a previous background check completed at 635 Woodland Ave., Suite number 2104 in Kansas City, MO 64106 (816)-889-6600.

Our campus security doesn’t serve the general public and licensing can only be supplied to the police officer that asked for the license that keeps his separation from the city police and campus security. That federal law gives equal opportunity that supports elementary and secondary education act of 1965 to keep that separation.

Because Afonso Brooks was labeled and campus security was actually enorcing the board of police commissioners of Kansas City, Missouri that says no audio or visual recordings on campus Property.

What specious bullshit. It actually was the executive branch CDC which issued the eviction moratorium. It was this activist court which said 'nope, screw that law, evictions will continue.'

You think it’s a politician game but you know how the right to bully me in preschool/elementary/middle school/high school. Because of information that you are aware about regarding Alfonso Brooks. But you want talk about the Kansas City star and how they’re getting advice from Stacy Shaw Law doesn’t have any type of skeletons in her closet but you have more skeletons in your closet.

I've worked with every judge on the 16th Circuit and all were above board in their dealings with me.

The Star is accused of publishing half truths. For the Star, that's an improvement.