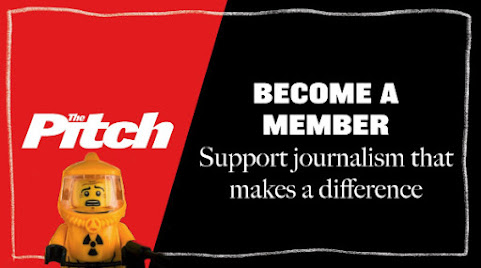 Harsh times have hit every local industry during the pandemic but Kansas City print media was already suffering an apocalyptic reckoning that threatened to annihilate the written word from the local news scene.

Okay, that's probably too dramatic but the reality is that people just don't read news, opinion and analysis that much anymore and social media is now the dominant distribution channel for two-bit punditry. A bevy of mobile phone apps provide a somewhat level playing field for keyboard warriors, trolls and journalists alike and the "alternative" magazine is merely a legacy of a wonderful but mostly forgotten moment in time when the American plebs attempted to provide a counterpoint to their betters.

And so, the Pitch is moving to a donation model that has mostly resulted in their content taking on the same schmaltzy tone as every other "progressive" screed online and this outlet simply isn't well positioned to serve as an effective partisan hack machine like so many other "journalists" typing on behalf of their political patrons.

THE PITCH NOW DEMANDS READERS TO REGISTER BEFORE ENJOYING ANY OF THEIR HIPSTER MATERIAL!!!

It's a dumb move that might make sense to newbie owners but will undoubtedly chase away people given that there's no shortage of similar freebie content in other places without as much hassle.

Moreover, the mag no longer enjoys any marquee local writers with connections that could draw a crowd or at least feign influence.

What we're really seeing is the last days of the iconic rag and just a bit of proof that the "non-profit" model won't save every publication and mostly serves to propagate the opinions of niche special interests which don't really provide the "journalism" that they promise.

New owners will be lucky if they get half of what they invested.

The notion that the Pitch is journalism is ridiculous.
The assertion that it makes a difference is even more absurd.
Just more KCMO fantasy.
Sad.

Will they accept 2 cents? LOL

The pitch was a really great publication about 8 years ago. They had three or four of the best investigative journalists in Kansas City and even when facebook was even more dominant, people flocked to the Pitch.

It not a partisan issue. It's a money issue. Local business just didn't support it and the Star declared war on it with Ink.

Too bad. They put out some great content in their day.

It doesn't help that KCMO businesses had their feet cut out from under them and don't have money to advertise as much as they once did. Thank you, Mayor Q and Dr. T-Rex. Keep killing businesses and people with late cancer diagnoses by mistakenly thinking masks and distancing aren't enough for your liking.

Ink has. Even dead for awhile

Shit rag, like the Star has been for years. Both promoting self agenda special interest demands 24 /7. Even the settlers would not choose them to wipe their asses with. I see no reason to ruin more trees to promote the confused.

The Pitch hasn't been worth reading ever since they stopped running "Alternate Lifestyles" personal ads.

Traditional (cheap) subscriptions are over; "membership" models are the only path forward for most publications.

It was only a side hussle for the new owners stuck in the crossroads bubble before the young lady was murdered and covid. Was it a hiss, a pop or a kaboom?

Agree, I wasn't a taker but made for great reading