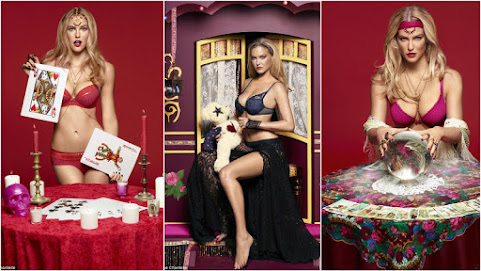 Not so long ago one of our favorite hotties dressed up as a soothsayer as a bit of sketchy promo for a panty brand and that's good enough to inspire our request for election prognostications tonight . . .

PROVE YOUR SMARTS AND SHARE ELECTION 2020 PREDICTIONS WITH TKC!!!

Because people who make bold declarative statements tend to look foolish in retrospect, TKC tends to shy away from predicting the future. Nevertheless, here's a glimpse at what supposedly smarter people have to say about the upcoming vote . . .

Four GOP Campaign Chiefs Make Their Final Election Predictions. They're as Divided as the Country.

That conversation was so interesting that we decided to get the gang back together a few months later, at the Texas Tribune Festival, for a discussion of Biden's flagging candidacy and how he might stop the bleeding.

An election prediction from someone who has never been wrong (except in 2016, when a lot of people were wrong)

With experts at FiveThirtyEight, The Economist and Politico all favoring Democratic nominee Joe Biden to win the 2020 election, some Democrats are having flashbacks to 2016 when President Trump defied the odds to beat Hillary Clinton. FiveThirtyEight gives Biden a 90% chance of winning, The Economist gives him approximately 96% and Politico says the race leans Democrat.

The white guy over 70 will win.

Biden goes down in the first round.

Supreme court will decide it. Trump will hold on.

Blow me while I shit CHUDs! Biden all the way!

I don't know who will win the presidential election but both Galloway & Bollier aren't even going to come close!

Posted on TKC first. Call me a genius later.

Democrats win, chuck accuses them of fraudlently stealing it and doesn't shut up for four years or until he dies, whichever comes first

Biden not as unlikable as Clinton, Trump no longer an unknown quantity,
Republican-led Senate has pissed off lots of people - the Supremes may not be able to ignore the voters and hand this one to the Republican.

Any person who sucks dick will vote for Biden.

Voters have Wisdom. And you see Hundreds of thousands of TRUMP SUPPORTERS AT his rallies .Only a Dozen at Sleepy JOEs and that is when he had JON BON JOVI WHO HE PAID .I'M A COWBOY ON A SLEEPY HORSE I RIDE

9:07, is that supposed to sway undecided voters? We can see who the thugs are, & we're voting them out.

Starting tomorrow, we take our country back from the mafia.

Last gasp, MAGATs! In less than 24 hours Dear Leader will be one giant step closer to jail. VOTE HIM OUT! LOCK HIM UP!

Trannies, feminists, blm and antifa welcomed! There, fixed it for you!

Trump wins, the silent majority will take him to over 300 electoral votes.

They forced us to be silent and lie about who we would vote for in order to not be severely beaten or killed, this is why they never see this coming. The dimwit followers are so gullible.

9:57 I’m still trying to figure out who’s going to jail and why. Enlighten us with your brilliance will you.

The biden mafia family is who’s going to jail so....

I caught Kamala's final interview, prior to tomorrow's election. It wasn't covered very well..., so, I thought I would pass on at least the last few questions she answered because she and Joe have been hiding from the media and pretty much silent on the issues.

REPORTER: "What do you think of Beirut".
KAMMY: "Hank Aron was a better player."

REPORTER: "Moving along, how much should be spent on defense?"
KAMMY: "That's a trick question, but, in the end, it all depends on how big the yard is."

REPORTER: "Oooookay, well lets switch gears Kamala, the holidays are coming up and I am sure on a lighter note, the voters would like to know what your kids are hoping for, for Christmas."

KAMMY: "You kid's bike. I am a Socialist moron."

REPORTER: "I'm beginning to think that you are gonna tell me that you woke up this morning and shot an elephant in your pajamas."
KAMMY: "How could an elephant get into my pajamas?"

President Trump wins, Republicans hold the Senate, and take the House. The polls are never accurate, Look at the enthusiasm for Trump
Vs. none for Biden. That will carry the party forward.

Trump is full of hate, lies, denial of Covid, and has bragged about being personal friends with the President of China and North Korea - do we really want him as President?

He called John McCain a loser. Really? I think he was a survivor and a success.

Trump is a spoiled brat. In 2 years he will be in prison for tax fraud.

^^One more day you filthy MAGAT. Chuck, make sure your suicide plan is place. Usually you could count on stupid Dave, but since he died of COVID, make sure you have someone else to pull the trigger tomorrow night since you lack the balls. Come Wednesday, we don’t ever need to hear from you again!

The libs can feel their power slipping further away just like they did when Ruth Buzzy Ginsburg croaked.

Democrats will be suicidal tomorrow night. Hand them a copy of Art of the Deal to push them into full psycho mode.

Trump card beats gender nobody has ever heard of card.

Trump carries every state expect Colorado and the District of Columbia. Epic riots destroy the job and tax base of every shit hole demoncratic city. F--k them.

Including what is left of KCMO. After tomorrow Platte City will annex KCI to save KCMO. Lol

I regrettably voted for Obama, but the Democrats have gone off the deep end. They’ve become the party of lies, lawlessness, very late-term dismemberment abortions, violence destroying once great American cities, high taxes on our paychecks to pay for socialist wet dreams, weak military, open borders, free healthcare for illegal aliens at taxpayer expense, defunding the police, sanctuary cities for criminals here illegally, taking away guns, sending $1.7 billion of our taxpayer dollars on pallets to Iranian radical leaders to pacify them but were used to kill more U.S. troops, packing the Supreme Court, and more idiotic ideas. No thanks.

The smear campaigns continue by the Democraps and their liberal media allies. They don't let the truth get in the way of any means to besmirch Trump. We're still waiting for Adam Schiff's promised direct evidence of Trump-Russian collusion. American taxpayers had to pay for the Mueller investigation fiasco. The Democrapic National Committee should reimburse all Americans for the millions of dollars wasted on that and other lies.

10:09 you miserable little slut. So sad you hate yourself so bad you will belittle two very successful men in attempts to make yourself appear to be far more superior. While both of those men give great insight and intelligent thoughts on matters all you do is push out hate and stupidity. You're a loser, we know it and time for you to admit that which you are. Super Dave didn't die of anything, he's off enjoying life as he travels all over to the best fishing spots many can only dream of hoping to fish at some day. Chuck is doing very well himself enjoy his golden years and spending time with his many friends.

So I will use words you seem very familiar with when I ask you to please, "FUCK OFF AND DIE"

Larson is dead and chuck has no friends; even the Prairie Village squirrels won't get near him anymore

Is there an option to vote for Kamala?

Oh, 11:00, there you go again for the 86th time with that. You can probably stop now. Get yourself a new copy/paste on Wednesday, ok?

12:01 is delusional and a very lonely person.

12:01 sounds like the CPA I hired to do my taxes and then said I had to pay all this money to the state of Kansas. Don't you idiots know I don't pay for anything and I don't pay any loans off either.

What time does Kansas Shitty burn? I want to make sure and get the libtards in action on DVR.

Biden wins both popular vote and electoral college. Trump refuses to concede and leave office. He is forcibly removed in January. Following that the USA will add an amendment to the Constitution with a clear process for handling such a situation.

^^WAAAAAAAHHHHHHH!!! Biden sucks but we deserve the win because orange man bad!