Okay, it wasn't that "EPIC" but in a year of low expectations, the glorified pick-up basketball game proved to be a worthy distraction from all of the overwrought talk about the future of "Democracy" and disappointing Thanksgiving plans. 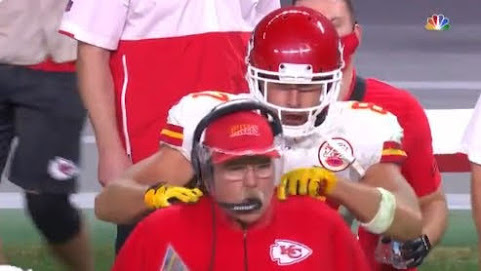 Here's a peek at our favorite headlines

Despite a strong showing from Vegas, Kansas City needed just one minute to seal it

The Kansas City Chiefs and Las Vegas Raiders combined for a nail-bitter on "Sunday Night Football." It couldn't happen any other way between the two teams at the top of the AFC West. Patrick Mahomes and the offense were the stars of the show for Kansas City and they ultimately pulled out all the stops to secure the game-winning score.

The Chiefs will get a chance for revenge against the only team to beat them this season, the Raiders, on "Sunday Night Football" in Week 11. Las Vegas outscored Kansas City 40-32 in Week 5, thanks to a sharp performance from Derek Carr.

The Las Vegas Raiders were anxious to prove their Week 5 win wasn't a fluke. The Kansas City Chiefs were ready for some revenge.

Skip to main content The browser you are using is no longer supported on this site. It is highly recommended that you use the latest versions of a supported browser in order to receive an optimal viewing experience. The following browsers are supported: Chrome, Edge (v80 and later), Firefox and Safari.


King Of The Chiefs Cont’d

Isaac Brekken/Associated Press Like any of the regularly used Undertaker GIFs seen on social media, Kansas City Chiefs quarterback Patrick Mahomes rose from the mat when everyone thought he'd been buried by others in this year's MVP race thanks to another stellar performance in Sunday's 35-31 victory over the Las Vegas Raiders.

Mahomes outduels Carr to all but seal AFC West

This is our footballer OPEN THREAD for tonight and hopefully we'll have more for the morning update . . . STAY TUNED!!!

There was a game tonight?

Glad it worked out.

Did Kelce get consent?

We give McHomie another 250 million, so ball scratching Menboys can be entertained for their lack luster lives ? Meanwhile the economy of our town collapses. Weird

^^So? Chiefs rule, you drool!!! Mahomie is your daddy! Go Chiefs!

Was there any question? Can't leave Mahomes with more than like 35 seconds.

Is Mayor Lucas worried about cramming thousands of people into a confined stadium space? No! Public health mandates are for individuals and small businesses only. Quinton kisses the ass of Dallas resident Clark Hunt, and the JOCO resident asses of the Chiefs management.

Is fake-Dr. Archer calling for all Chiefs home games to be cancelled? No! Fake-Dr. Archer only likes to pick on bars/restaurants, hobo camps, and little old ladies who don't wear masks.

Simply more irrefutable evidence that Lucas and Archer are PRETENDERS who don't really believe their own pronouncements. PATHETIC!

Tony this win was legit epic. Seemed like it was in doubt, I admit I had my doubts, so a win snatched from the hated raiders and stay atop the division and placed for when Steelers falter for that no. 1 seed. Mahomes was a man on a mission to close this game. Can’t believe we have our own Elway now it’s so awesome. Kielce and hill too. Go Chiefs ! This version of chiefs has heart too. Maybe they can do it again. Need to get better on secondary though, yikes.