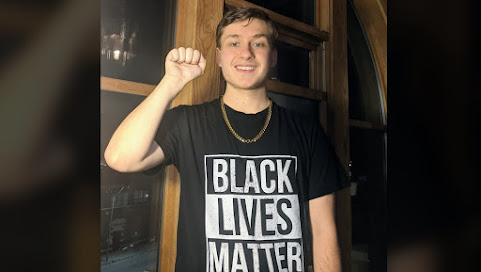 We've talked about the controversial and now deleted tweet wherein many Kansas Democratic Party officials claimed the young dude from The Dotte was making a threat against Guv. Kelly.

However, buried in another article on the topic, here's a look at elected leaders taking his antics seriously . . .

Kansas House Minority Leader Tom Sawyer said he’s so concerned about Coleman’s behavior. Legislators will be asking for added security to keep an eye on him when the legislative session begins.

which makes most of TKC's commenters bigger pieces of shit than this kid.

alanis, perhaps in this instance it is hypocrisy. .

I think you're getting away from the fact that Aaron Coleman is a dork and a 3rd rate Andy Kauffman ripoff.

Coleman is too scared to do standup and has a minimal audience so he's wasting taxpayer money.

you want to wrestle me about that?

Please for the love of God tell me that Colemman is not a TKC reader.

oh c'mon i'll put your head in a leg vice and pull your hair.

I think you are missing a great opportunity for Republicans. With Coleman in the KS House he would be highly ineffective as the dem's won't support him but in the next election you can blame him and them for everything going wrong as he is their guy! KEEP AARON COLEMAN IN THE KANSAS HOUSE!

Got to respect theater of the REAL.

He is the ultimate “yellow dog” Democrat. Wyandotte voters must be proud. More articulate and mature than Sharice Davids. Biden isn’t the only proud democrat.

The problem in WYCO is that the lack of educated voters only see what the democrat party wants them to see. Division in the Hispanic community causes these poor idiots to vote in effect against their best interests. They have failed to realize that in the past four years their wealth has grown, better paying jobs, less unemployment, but they vote for democrats. Why do you hear "47 years in politics and he's done nothing to improve your life" but they vote for him anyway? Because it is true. And JOCO is starting to go the same way. This is not a good thing.