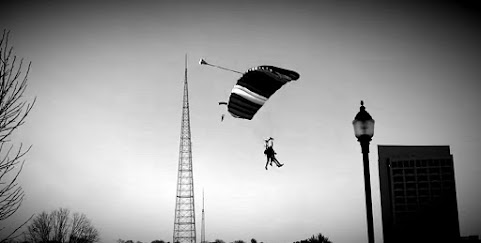 Here's a look at local better angles and tribute to Veterans that shouldn't be confined to just one day.

Our favorite local honor was this EPIC "legacy jump" captured quite nicely by a local video channel . . .

And after the jump on this page, we set aside some of our favorite local celebration and efforts to help Veterans across the KC Metro . . .

BELTON, Mo. - On a day when we take time out to express our gratitude to the men and women who served in our military, some area veterans gathered to give special thanks to two men who have never worn the uniform. Marquise Paige and Rasheed Hobbs jumped into action last Thursday when a fire [...]

There's a new initiative to help veterans. It's called HVAC, the Homeless Veterans Assistance Coalition.A space outside of Hope Faith has been used for months during the pandemic to help the homeless get the help they need.

KANSAS CITY, MO. - A simple strand of thread connects an honorable past to a bright future. Connie Swartz, of Kansas City, Missouri, recently founded Celebrate Fatigues to turn unused military uniforms - hidden in basements and closets - into usable products to pay tribute to the nation's veterans and active service members.


Kansas City's World War I Memorial honors veterans with skydiving display and gifts of cars for those in need.

Kansas City's National World War I Museum and Memorial Wednesday celebrated Veterans Day by honoring and giving back to those in the community who have served. While the memorial's celebration of Memorial Day in May was held virtually due to the coronavirus pandemic, CEO and president Matthew Naylor said it was important to have Wednesday's events take place in person.

BUCKNER, Mo. - "You know, you don't get bothered by stuff you can't control," said 85-year-old Richard Romo as he mused philosophically about his missing military records. But Romo's grandson refused to accept the government's position that no documents existed of his grandfather's six years of service.

Kansas City Chiefs offensive tackle Eric Fisher was announced Wednesday as the team's nominee for the Salute to Service Award.The award, presented annually by USAA and the NFL, honors a league member who demonstrates an exemplary commitment to honoring and supporting the military community.For the past three years, Fisher has worked closely with Reunite the Fight, an organization founded in 2017 in his home state of Michigan.

Unlike so many other people who've been out of work during the pandemic, Manhattan photographer Doug Barrett has been busy. His photos from protests in Manhattan after George Floyd's murder brought him attention from places like the BBC, Fox News and Time, whose editors were apparently intrigued by images of Black Lives Matter protests all the way out in Kansas and asked Barrett, whose company is 400 North Creative, to share his story.

Veterans are suckers and losers. What was in it for them?