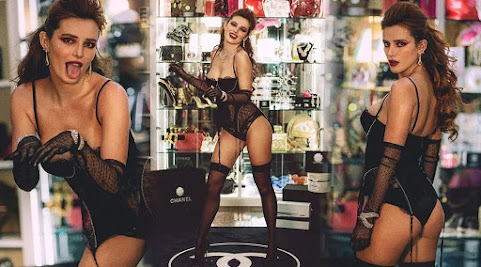 KANSAS CITY, KS (KCTV) - KCTV5 News stands for you when it comes to critical updates on COVID-19 and Tuesday local health experts shared an important update on when we might be able to get a vaccine to everyone.

MRIGlobal in KC has ultra cold freezers for storing vaccines

KANSAS CITY, MO (KCTV) - Attorneys for Lisa Montgomery are going straight to the top in their attempt to save her from her scheduled execution. In a "placeholder petition" addressed directly to President Trump, the attorneys ask for a reprieve of the date and/or commutation of her sentence from death-to life without parole.


KCI Airs It Out

KANSAS CITY, Mo. - More than half of Americans plan to travel next week for Thanksgiving, according to a recent survey from Trip Advisor. For some travelers, that will mean going to the airport in the middle of a pandemic.

Bella Thorne has had a wild few months on Only Fans. Initially, she made a killing on the platform, raking in several million right out of the gate. Yet, it came with controversy after she seemingly promised nudes and didn't deliver, which subsequently caused Only Fans to set guidelines which impacted sex workers.

Christopher Krebs, who led the federal government's election cybersecurity efforts, has been fired by President Donald Trump. Krebs, the director of the Cybersecurity and Infrastructure Security Agency, or CISA, had recently butted heads with the White House over his agency's Rumor Control blog, which rebuts a list of false claims of election fraud and hacking - many of which have been touted as real by Trump or his lawyers after he lost the election this month.

'It's not real': In South Dakota, which has shunned masks and other COVID rules, some people die in denial, nurse says

South Dakota's high rates of COVID-19 and low virus regulation have sparked criticism even as some dying of the virus there don't believe it poses a real threat. That's according to Jodi Doering, a South Dakota nurse who has gained national attention for her account of working on the front lines in a state where leaders have long minimized the impact of the virus and refused to implement rules like mask mandates.

The comment follows reports that Emily Murphy, the head of the GSA and an appointee of President Donald Trump, has yet to certify Joe Biden as the official winner of the election, despite multiple news outlets calling the race for him.

With Thanksgiving fast approaching and Christmas right around the corner, Pepsi unveiled a limited edition apple pie-flavored cola on Tuesday.

KANSAS CITY, Mo. - New COVID-19 restrictions announced Monday in Kansas City, Missouri, have left some couples scrambling to make changes to upcoming weddings. The Safer at Home restrictions include a 10-person gathering limit within KCMO city limits and weddings are not exempt unless the health department approves a mitigation plan beforehand.

Warm, windy for your Wednesday

Hide Transcript Show Transcript KANSAS SIDE LAWRENCE DOWN TOWARD OTTAWA YOUR EVENING FORECAST WILL HAVE IT GOING BACK INTO THE 40'S SOUTHERLY BREEZE THE SOUTHEAST WIND LATER ON TONIGHT TONIGHT NOT TOO STRONG ONLY 5 TO 10 MILES. OUR BUT WE DROPPED FROM 50 DOWN TO 45.

This is the OPEN THREAD for right now. Keep going for more local links . . .

OVERLAND PARK, Kan. - Parents and students in the Shawnee Mission School District are adjusting, once again, after the district announced Monday that it will transition middle and high school students to full remote learning later this month. "We talk very frankly in our house about what the numbers are doing," said Peggy Tuttle, a mother to children in the district.

Hide Transcript Show Transcript WITH THE INDEPENDENT SCHOOL SUPERINTENDENT TO LEARN MORE. WITH MANY COLLEGE STUDENTS NOW BACK AT HOME DUE TO COVID-19. THE INDEPENDENCE SCHOOL DISTRICT IS OFFERING A UNIQUE OPPORTUNITY THE ABILITY FOR THOSE STUDENTS TO EARN AN ADDITIONAL INCOME AS A SUBSTITUTE TEACHER.


Calling It Quits Amid COVID

KANSAS CITY, MO (KCTV) -- A new study from Pew Research found that COVID-19 has caused more moms and dads in the United States to leave their jobs. The study also found that those who are working, have been reducing their work hours.

Hide Transcript Show Transcript PROCESS. WHETHER IT'S THE GATHERING AT THANKSGIVING OR ALL THE TRIMMINGS OF CHRISTMAS THIS TIME OF YEAR IS FILLED WITH FAMILY TRADITIONS AND HIGH EXPECTATIONS. NOW THAT HEALTH EXPERTS ARE RECOMMENDING AGAINST THESE GATHERINGS TO PREVENT THE SPREAD OF COVID-19 LOVED ONES ARE MAKING TOUGH CHOICES ABOUT CANCELING PLANS MENTAL HEALTH EXPERTS ENCOURAGE HONEST CONVERSATIONS ABOUT IT.


Nice Save In Golden Ghetto

OLATHE, KS (KCTV) -- Firefighters made quick work of a house fire Tuesday morning. Crews were called about 9:15 a.m. to Sheridan Street and Sherman Avenue. Firefighters say the fire started by smoking materials and caused significant damage to the home. No injuries were reported. KCTV5.com is now with you on the go!

The Evergy Plaza Lighting Ceremony will be virtual this year but there will still be plenty of tradition and returning favorites, including performers from the Kansas City Ballet.The Kansas City Ballet is such a big part of the holiday season, but for these athletes, the pandemic has changed everything.

The Las Vegas Raiders handled business at home on Sunday when they cruised to a 37-12 victory over the Denver Broncos. The Raiders (6-3) will be back at home this week in Allegiant Stadium, but they're going to be taking on an entirely different beast in the Kansas City Chiefs (8-1).

Five years ago, the Kansas City Royals were world champions. It was not a fluke or an accident, but the payoff for implementing a strategy that allowed them to compete despite not having the resources of the Yankees and Red Sox of the world.


Celebrate Kansas City Fanboy Fashion For A Good Cause

KANSAS CITY, Mo. - Tavia Hunt and the Kansas City Chiefs plan to use Wednesday night's Style Show to benefit the Harvester's Community Food Network. While the event, where style and football combine in a free fashion show and auction, will continue in its ninth year, the ongoing coronavirus pandemic means this year's event will be held virtually.

The Greater Kansas City Crime Stoppers are still searching for tips on the one year anniversary of the homicide of Darren Thompson. On Nov. 17, 2019, officers responded to the area of East 10th Street and Chestnut Avenue just before 2 a.m. The early Sunday homicide was initially reported as a sound of gunshots call to police.

if trump would've have fired Fauci, he might have won the election. Too little, too late.

^^^ maybe but when you have the ability to change votes in those electronic voting machines it doesn’t really matter in the end.

If you do the math is some states that are being questioned Trump did win the election and he won big. There is some damaging evidence about this election that have the democrats shaking and they should. The liberal judges are throwing his court cases out of court right and left but that is going to be in Trump's favor.

i do believe it was 2010 while channel surfing one night i chose to check out the royals for a bit. i hadn't watched them since the short season when pena was manager. This was before moose, sheilds, davis and salvy. callaspo was playing third base then.

the first play i saw on t.v. that night was a shot to deep short - somehow escobar gets a glove on it and fires a bullet to hosmer for an out. it was the greatest defensive baseball play i'd seen in a long time.

they may of lost that game that night but afterwards, little by little and day by day, i started tuning in on a regular daily basis. Sure as heck they started getting better and better - had to wait on moose going between omaha and the majors for a while and had to wait on salvy's english to get better, among other things.

surely some remember those after game interviews - it was all worth the wait. just a bunch of special guys that were meant to win it all when they did.

one major key for these players we have now is that there can't be any mistakes - i.e. - passed balls, errors weather fielding or throwing, staying in shape and lose the alcohol, etc.

....figures tRumpMonkeys would stand up for a bitch that cut another woman's baby out of her body...
stand up for the baby killer....
......worthless fucks.

Yet, weirdly enough, there's not a fucking shred of fucking evidence the voting machines changed votes except some dumb fucking write up on tinfoilhat.com and our soon to be ex-POTUS tweeting out conspiracies left and right because his clinical narcissisms and fragile ego won't let him except the fact that he's a fucking LOSER.

Get a fucking life losers and move the fuck on. Biden is your new President.

TRUMPMONKEY IS A LOSER!!!!
it's GREAT!

How is Biden going to be President when the m'fer is in jail as a traitor AND felon?

He can't and won't EVER be President, Sorry little Snowflakes for your bad luck/choice.

^^and yet he's the President so weird!