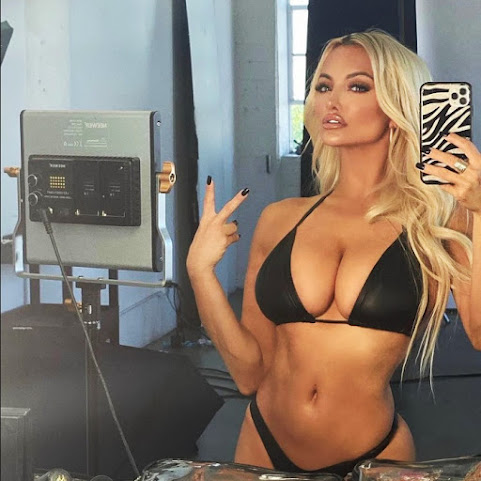 Right now hottie Lindsey is promoting her upcoming calendar to her legion of loyal followers whilst talking trash about this historic year . . . As she gets things off her chest, we simply compile community news, pop culture and top headlines worth sharing.

NORTH KANSAS CITY, Mo. - An independent committee has started reviewing Pfizer's COVID-19 vaccine trial data to determine if the vaccine should be recommended for Federal Drug Administration approval next month. If it receives the green light, the vaccine must be kept in sub-zero temps to remain viable.

FAIRWAY, KS (KCTV) - One of Kansas City's biggest mysteries will soon be back in the nationwide spotlight. CNN has produced a new documentary on the Baby Lisa case. Baby Lisa was 10-months-old when she disappeared from her Kansas City home in October of 2011.

KANSAS CITY, Mo. - Piles and piles of trash are the first thing you see when you drive by what once was a respectable mobile home park called (ironically) Pride on 40 Highway. Neighbor Aaron Gross said with each passing month, this abandoned trailer park gets worse.

Lindsey Pelas Is Single And Taking 'Applications' For A New Boyfriend!

"I'm single and now accepting applications," Lindsey posted on Instagram. She included this -- "Rules: Cannot be a con artist. Must love dogs. No reality television or other 'odd' jobs." Now, she doesn't clarify if the possible suitors cannot have worked in the reality television business at all, or if you just can't be a Bachelorette cast-off!

Pennsylvania's secretary of state on Tuesday certified the results of its presidential election, confirming that President-elect Joe Biden defeated President Donald Trump, Gov. Tom Wolf announced in a tweet. The Keystone State's certification of Biden's victory came a day after Michigan certified that the former Democratic vice president had won its own election.

WASHINGTON - Joe Biden described the presidential race as "Scranton versus Park Avenue." He slammed tax cuts for billionaires. He touted that he would be a state school graduate, not another Ivy Leaguer, in the Oval Office.

Roger Stone-Tied Group Threatens GOP: If Trump Goes Down, So Does Your Senate Majority

Conservative operatives and a super PAC with ties to infamous GOP dirty trickster Roger Stone are calling for Trump supporters to punish Republicans by sitting out Georgia's crucial Senate runoffs or writing in Trump's name instead. And though their efforts remains on the party's fringes, the trajectory of the movement has Republicans fearful that it could cost the GOP control of the Senate.

2020: Another Oddity. Wildlife officials in Utah were counting sheep from a helicopter when they discovered a shiny metal monolith in a remote area that looks straight out of a Stanley Kubrick film. It is estimated to be about 10 to 12 feet high, and its glistening surface is in sharp contrast to the large red rocks that surround it.

Trump To Pardon Turkey Again, Trying To Show Normalcy Amid The Abnormal

subscribe to The NPR Politics Podcast podcast A U.S. president will again partake in the very strange and myth-filled tradition of "pardoning" a turkey at the White House Tuesday. The birds' names are " Corn" and " Cob." The White House has a poll on Twitter asking which should be spared.

Scientists are now studying the effects of COVID-19 on people long after they've been listed as recovered. They're called long-haulers, patients who experience symptoms for weeks or months after their diagnosis. Derick Cunigan is a musician who used to belt out songs on stage.

KANSAS CITY, Mo. - The family and former employer of a metro man who's been missing for more than a year are determined to keep his memory alive. Johnny Thompson disappeared in July 2019. He worked at the Center for Developmentally Disabled (CDD) for a decade.

Today is a Storm Track 5 Weather Alert Day. We are tracking a 60% chance for rain mixing with snow across northern Missouri. High temperatures near 42.

The Get Up Kids - Maybe is the song of the day and this is the OPEN THREAD for right now. Keep going for more local links . . .

SOLEMN SALUTE FOR A FALLEN FIREFIGHTER MANY PAID THEIR RESPECTS OUTSIDE OF THE COMMUNICATION CENTER WERE SCOTT DAVIDSON WORKED AS A PROCESSION ESCORTED HIM HOME TO WICHITA BEFORE ANSWERING 911 CALLS AND DISPATCHING HELP HE WORKED AS A PARAMEDIC IS LONG TIME A PARTNER WHO RODE WITH HIM ON THE AMBULANCE WAS HERE TODAY, AND I KNOW HOW HARD IT'S BEEN FOR HIM AND HIS FAMILY AS WELL.

KANSAS CITY, Mo. - 2020 is the deadliest year in Kansas City's history. More than 160 families lost someone this year to murder. The hardest hit: their children. While each homicide has a number, many are known as Mom or Dad. "My father was Kansas City's ninth homicide of 2012, so I am the child [...]

Registered nurse Pascaline Muhindura has spent the last eight months treating COVID-19 patients at Research Medical Center in Kansas City, Missouri. But when she returns home to her small town of Spring Hill, Kansas, she's often stunned by what she sees, like on a recent stop for carryout.

KANSAS CITY, Kan. (KSNW) - The U.S. Attorney's Office announced Monday a Kansas man was sentenced to 167 months in federal prison for selling heroin mixed with fentanyl to a man who overdosed and died. Ramon Strickland, 44, Kansas City, Kan., pleaded guilty to one count of distributing heroin/fentanyl resulting in death.

LAWRENCE, Kan. (AP) - A new report commissioned by the city of Lawrence cites a need for the community to diversify its economy or risk becoming too expensive for many people. The Lawrence Journal-World reports that the city in June hired Ernst & Young to create an economic development strategic plan.


Kansas Out Of Cash

SHAWNEE, KANSAS (KCTV) -- Kansans who were counting on extended unemployment benefits amid the pandemic will see those payments go away. The United States Department of Labor notified the state that the unemployment insurance Extended Benefits (EB) program is no longer active.

Five years after Ferguson report, some say progress has come too slow

Like so many around the country, Dr. L.J. Punch was glued to the television on the night of Nov. 24, 2014. That night, the country learned that then-Ferguson police officer Darren Wilson would not be indicted in the Aug. 9 shooting death of 18-year-old Michael Brown Jr.

KANSAS CITY, Mo. - USA Today has unveiled its 10Best Readers' Choice nominees, and a Kansas City hotel made the cut. A panel of travel experts whittled the list to 20 nominees for the nation's best new hotels that opened in 2020. The public can vote for their favorite hotel once a day through Dec.

COVID and cold weather present challenges for After the Harvest

KANSAS CITY, Mo. - The rise in new COVID-19 cases and a decrease in temperatures creates two challenges for Kansas City, Missouri, based nonprofit After the Harvest. The organization collects excess produce then supplies food banks with fresh fruits and vegetables to pass out to those in need.

Look at Country Club Plaza lights from years past

Philly Tells Trumpers To Eat It!

Trump should name one of the Turkeys Swamp and the other Election Fraud and condemn them both to a quick death.

Well @11:43, based on Trump's past performance, that would result in four years of trying to kill "Swamp" and still failing, and 22 attempts to kill "Election Fraud" with no weapons.

Sort of a case of the Ships abandoning the sinking Rats!

wtf is going on. NY post videos start with the sound turned off.

I have in the past contacted at least one organization about auto video sound and how it could awaken my child.

remove some of the comfort zone like bushes and trees that block out light at night, just for starters.

how do you go about getting a job counting sheep from a helicopter?

The Biden Bounce hits Wall Street after the certification.

Let me know when Whore chi Minh steps down from the Senate until then TRUMP 2020.