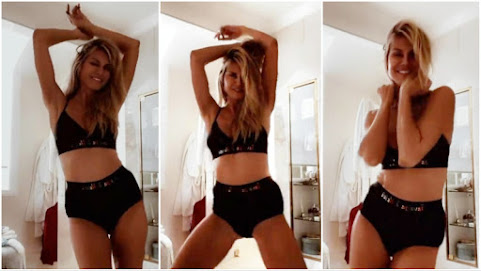 On this #TBT morning we just noticed 47-year-old hottie Heidi still dancing to promote a new line of panties and that inspires THIS compilation of pop culture, community news and top headlines.

KANSAS CITY, Mo. - The effort to keep holiday traditions alive will take extra work this year thanks to the coronavirus pandemic. Organizations that typically provide gifts and meals for local families are now forced to find new ways to satisfy the need, including Della Lamb Community Services.

Downtown Kansas City's office market evokes a freshly developing Polaroid snapshot: Although it promises a pretty picture eventually, an array of details remains fuzzy for now. Local and national commercial real estate analysts prognosticated Tuesday about what lies in store for Downtown's office market, based on pandemic trends and methods for driving growth.

Heidi Klum showed off her incredible supermodel body when she posed in a vintage Thierry Mugler dress, perching on the side of the stage. The 47-year-old flashed her cleavage and long legs in the navy number which had an plunging neckline and a huge split going up the front on Instagram on Wednesday.

Trump's fraud claims a boon for his and his allies' fundraising

Trump's insistence that there was voter fraud and demands for recounts are helping create post-election unity among his base, and raise money the president can use to keep his political career afloat after January, political fundraisers and campaign finance experts told POLITICO.


Prez Trump Will Never Quit And He Doesn’t Have To

What if Trump never concedes? The Constitution will end his term, conservative lawyer John Yoo says

The conservative lawyer John Yoo is among the latest legal voices to throw water on U.S. President Donald Trump's attempts to reverse the result of the 2020 election with claims of voter fraud.

Vermont Sen. Bernie Sanders said Wednesday that he would accept the job of Labor secretary if President-elect Joe Biden asked him to join his Cabinet.

Democrats Have a Much Bigger Problem Than the Senate or the Electoral College The Real Threat of Trump's Ridiculous Coup Attempt Trump Is Making a Serious Attempt to Hold Onto Power Republicans Have No Way to Get Off the Trump Train So far, the Republican response to President Donald Trump's ludicrous attempt to cling to the presidency through the courts hasn't exactly been a profile in courage.

An anchor on Fox News has gone viral after she was caught on a hot microphone expressing disbelief that a guest on the network would cast doubt on projections that Joe Biden Joe Biden Feds charge Staten Island man over threat to Schumer, FBI Pence cancels vacation in Florida: report Romney shoots down serving in Biden Cabinet MORE has been elected president.

GARDNER, KS (KCTV) - It's the social media platform conservatives are flocking to in droves. "Parler" has been gaining popularity since the election. Facebook, Twitter, Instagram and Reddit, some conservatives say they've had enough! "They are tired of one side doing not fair reporting and one big tech doing censorship," said Don Harvey of Gardner, Kansas.

LEE'S SUMMIT, Mo. - It's the end of an era for a Lee's Summit skating rink. Landmark2 Skate is closing its doors this month because of the pandemic. Owner Charlie Johnson broke the news this month on Facebook. Trina Anderson's husband, whom she met at the skating rink in 7th grade, saw if first.

Hide Transcript Show Transcript LIGHTS ALREADY. I LOVE IT. CAPITAL FEDERAL CITYVIEW CAMERA, WE SEE A FEW STARS. WE WILL HAVE MORE CLOUDS COMING IN FROM THE WEST. 37 DEGREES WITH A BRISK BREEZE. WIND CHILL VALUES AT ABOUT 30 DEGREES. THERE ARE SOME WARMER SPOTS. 41 IN OLATHE.

Billboard #1 20 years ago Creed - With Arms Wide Open is the song of the day and this is the OPEN THREAD for right now.

Trump will be easier to ignore in the very near future. Just another old man ranting after January 20th.

I hope they make him perp walk out of the White House on January 20th. That will be so much fun!

Economics 101. Pay attention socialist dummies. When you libtards make it too expensive to operate in your little utopia, businesses can and will move operations to someplace else where the business climate is more friendly.

The same shit happens with people living in those little utopias. It's why I left Kansas Shitty and will never spend another dime there.

I hope Biden considers Lucas for a cabinet job. He would be ideal as Secretary of Chickenshit Lying Homosexuals Department.

^^and we are so relieved your gone! The collective IQ of the city actually went up! Rest assured we don't miss you as much as you miss us, evidenced by your continued posts about the vibrancy of our magnificent city

The demonic Democraps had to cheat their way to the top post. Now, they'll pay for it big time in the 2022 elections. That's when the Republicans will take back the House and have the Senate. Biden's initiatives will go nowhere. Welcome to the world of karma, Democrapic bitches!

Biden is a known security risk, compromised by his Chinese Communist business dealings. Further, he has not been certified as the winner of the election yet and so does not have any official standing despite the pretentious of the legacy media that they get to decide who won the election. He should not be receiving security briefings. In fact, this illegitimate president, should be facing a Special Counsel investigation and impeachment if he ever illegally takes the oath of office.

^^and yet not one thing you said is true. Biden is your President. Weird.

Great. A president suffering from dementia and a Vice President who is a whore.

^^better than a President suffering from dementia who pisses his pants, can't drink without two hands, has trouble walking down stairs and a vice president who's a closeted fag. Which is what we have right now. Weird.

^^^. She will be puttin’ out for Putin pretty soon. Then other foreign dignitaries will be lining up and running a train on our new leader of foreign affairs. It will be a proud new day for America.

Funny how Trumpers don't care about the Trump family's business dealings in China. Trump ties anyone?

Bernie Sanders is a Communist.

Secret Service will be lined up doggy styl'in Kamala Harris.

VOTED HIM OUT! GONNA DRAG HIM OUT! THEN, LOCK HIM UP!

Man Democrats must be super good at criming because they apparently get away with everything while Trumptards seem to all get charged.

Or, I don't know, maybe the Dems haven't done any of the cockamamie shit that Trumptards are accusing them of? Haha, it's fucking laughable. Trumptards are like the wet bandits of the political world.