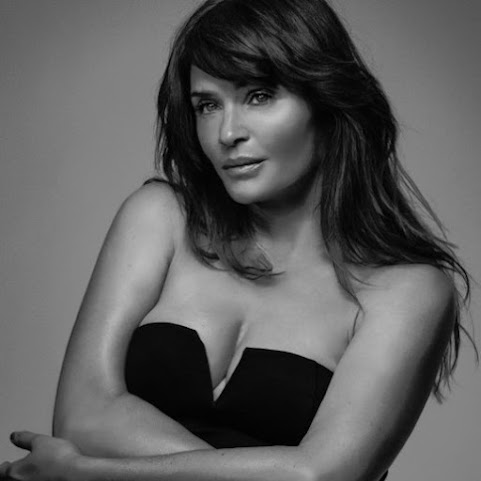 We start this #TBT with classic hottie Helena who is reentering the world of fashion at 51. And so, her enduring body of work inspires our peek at pop culture, community news and top headlines.

NORTH KANSAS CITY, Mo. - Dry ice manufacturers are seeing a spike in interest as the promise of a COVID-19 vaccine nears. David Hanchette and his team at Cee Kay Supply, the only dry ice producer in the Kansas City region, have been keeping busy ever since Pfizer and BioNTech announced the development of a vaccine [...]

KANSAS CITY, KS (KCTV) -- Frontline workers could receive a COVID-19 vaccine before Christmas, according to health professionals in Kansas and Missouri. On their daily coronavirus briefing Wednesday, doctors with the University of Kansas Health System said news from Pfizer and Moderna indicate vaccine outlook is promising.

Helena Christensen, 51, shows off her ageless looks in new campaign

The Danish supermodel teamed up with Bing, 37, to design a ten-piece limited edition holiday collection that includes clothing and accessories Bing, who is also originally from Denmark, and Christensen worked together to create pieces inspired by the model's 'iconic 90s style' Christensen, a former Victoria's Secret Angel, rose to

As Biden's Jan. 20 inauguration inches closer, this lack of preparation within the conservative movement has some of its top members worried they are unwittingly damaging their joint legacy with the president and creating an opening for the next administration to swiftly pursue a radical agenda.

The United States has recorded a quarter-million Covid-19 deaths, the latest NBC News numbers showed Wednesday, and the death rate has been accelerating in recent weeks as cases have been surging across the country. The 250,000th death was logged Wednesday morning, the data revealed.

Trump's team prepares for election fight to end in December

WASHINGTON - President Donald Trump's allies are preparing for the end of his legal fight over the election results well into December, even as they continue to push him to accept a conclusion to his presidency and make post-White House plans.

One of 2020's last big blockbusters, Wonder Woman 1984 , will simultaneously be released in theaters and on HBO Max on December 25th, according to multiple publications. Unlike Mulan, Wonder Woman 1984 won't cost anything extra beyond the monthly subscription fee. HBO Max subscribers will have the opportunity to watch the film directly from home.

KANSAS CITY, MO (KCTV) -- For the first time in 31 years, The Salvation Army will not hold their annual Thanksgiving meal in-person in Kansas City because of the COVID-19 pandemic. On Thanksgiving Day, volunteers will instead deliver prepackaged meals to 480 families who previously signed up for help with their Thanksgiving meal.

Veronica Hernandez's Thanksgiving normally is a large affair. Her mom and 10 other siblings, plus their families, gather in Hernandez's home in Hyde Park to eat, dance, play games, play music and simply enjoy the excuse to gather in one place. The party starts at 8 p.m., and goes well into the early hours of the morning.

Electricians overseeing Plaza lights are focused on the job at hand

In just more than a week, we'll be counting down to the traditional start of the holiday season here in Kansas City with the Evergy Plaza Lighting Ceremony.For well over a decade, master electrician Matt Deardorff is one of a handful of electricians trusted with overseeing the Plaza lights, maintaining and hanging the actual bulbs.

Warm with strong winds this afternoon, Thursday in Kansas City

#1 in 1990 Wilson Phillips - Hold On is the song of the day and this is the OPEN THREAD for right now.

KANSAS CITY, Mo. - The holidays bring different meanings to many different people, but for some Kansas City residents, they'll be navigating the holidays against a backdrop of a pandemic and unemployment. Kansas City, Missouri, resident Crystal Kent is one of those still without a job. "It's hard," Kent said.

NEW CENTURY, KS (KCTV5) -- The Navy's Blue Angles aerobatic team has canceled a scheduled performance for the metro. The elite squadron was supposed to take to the skies above New Century Air Center in New Century, KS Wednesday, but maintenance issues reportedly kept them on the ground.

KANSAS CITY, MO (KCTV)-A man who authorities say pretended to be a doctor and botched numerous autopsies is now facing federal fraud charges. Shawn Parcells is charged with 10 counts of wire fraud. Parcells has been the subject of numerous KCTV5 investigations over the past two years.

LENEXA, Kan. - "Are you crazy?" That's what Max Satterwhite asked roofer David Sutter after Sutter demanded some of his insurance money. This complicated story began last May when Satterwhite hired Sutter of Sutter House Roofing to replace the roof on his Lenexa home. Satterwhite hoped his insurance company would pay for the new roof, [...]

The key to stopping the spread of COVID-19 is to isolate those who test positive, but that's not always possible at home. The state of Kansas is offering an alternative, using hotels to stop the spread. As coronavirus cases rise, demand is growing for shelters set up by the state where people can safely quarantine.

Missouri's coronavirus spread is "exponential and unyielding," according to the latest White House Coronavirus Task Force report to the state. "There is now aggressive, unrelenting, expanding broad community spread across the country, reaching most counties, without evidence of improvement but rather, further deterioration," the document states.

Many counties in Kansas don't have mask mandates. In Franklin County, they're strongly recommended, but there's no requirement. At Ottawa Bike and Trail, a sign greets customers at the door that masks are required."With a few exceptions, everybody's been really good," said Jonathan Carroll, of Ottawa Bike and Trail.Carroll runs the shop with his brother.

It wouldn't be a Tesseract Ventures original if it lacked hard-wired flair, John Boucard said, showing off the metro's leading robotics startup's newest creation - interactive tees. "What we've developed is some embedded intelligence inside the textiles," Boucard, founder and CEO, said in a recently released video showing four T-shirt styles - which represent the company's four robotics studios - in action.

Chiefs, Raiders both dealing with several players on COVID-19 list before Sunday's game

KANSAS CITY, Mo. - As the Chiefs prepare to head West to face their rival, the Raiders, both teams have a problem: COVID-19. So far, Mecole Hardman, Eric Fisher and Mitchell Schwartz are all still on the Reserve/COVID-19 list, and the team has a lot of things to figure out before they head to Las [...]

Trump should probably do us all a favor and just resign now.

I’d like to mount Helena and fuck her deep and hard.

^^ But you won't ever have the chance unless she somehow gets transported into Mommy's Basement. And... "the Transporter's down again, Captain".

Conservatives has better be worried more about their funding that any thoughts of the existence of a "Trump Legacy"!

Charlie Koch sees the way the Country is headed, and is cutting off the funding of "Conservatism", so that unrealistic Pipedream will soon wither on the vine.

There will be a "Trump Legacy", but it will be one of out-of-control narcissism, greed, selfishness, incompetence and a great deal of damage to this Country.
In fact, the most common thing that will be said from now on when mentioning Richard Nixon will be "well, at least he wasn't as bad as Trump"!


If you are a conservative who loves this country you should not give to the Salvation Army they are Trump bashers and they excluded Melania Trump from helping in their organization. I used to give tons of money to them now I won't give them a penny and neither should you. Let the liberals help them and see how far they get with that.

Haha, Nixon wasn't as bad as Obama either. Let the one without sin throw the first stone!

"Election Fight", that's pretty laughable. It's been a blowout. What's team Trump's record now? Like 1-29. It's a joke. It's being done to placate the fragile ego of a clinical narcissist. When real lawyers are like "Fuck this, I'm out, I don't even need the paycheck from this clown" and you have to go to Rudy, you're pretty much fucked. Dude's a Loser.

^^^Sure buddy, sure. Ohhhhh, he's gonna be arrested any minute now.

How about Hunter's laptop? The FBI is in possession right? Any minute now, he will be arrested and all will be exposed.

Haha, Democrats never fucking get arrested, Republicans, aka Trumptards always do. They must suck balls at criming. Hahahahahaha.