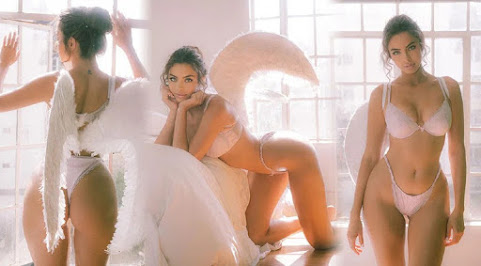 To start this morning we share a bit of promo from hottie Priscilla that offers a glimpse at social media commercialism driving most of the online discourse . . . In turn, that inspires us to share community news, pop culture and top headlines . . .

KANSAS CITY, MO (KCTV) --- In its fourth year, the THUNDERGONG! event reached a milestone: $1 million in donations. Entering this year's event, THUNDERGONG! had helped raise over $850,000 for Steps for Faith. The fundraising has helped over 400 individuals receive much needed prosthetics.

By Madison Parry Housing inventory took an near-unpredictable fall this year, hitting Kansas City with a 44.1 percent drop in total inventory since 2019, resulting in a median list price growth of 12.5 percent year over year and an end of August median sale price showing 11.1 percent higher than last year.

Kansas City's largest event space, the Kansas City Convention Center, has achieved accreditation from the Global Biorisk Advisory Council (GBAC) STAR™ program for its cleaning, disinfection and infectious disease prevention practices. The City of Kansas City worked with Visit KC to earn this designation, which is recognized by industry leaders as the gold standard for prepared facilities.

Pope Francis caught the attention of social media users after he liked a raunchy photo on Instagram, and people have been reacting on Twitter. Everyone's made the same mistake of liking someone's Instagram by accident at least once in their life.

Left-wing counterprotesters moved in during a pro-Trump " Million MAGA March" in Washington, Saturday, leading to scattered confrontations and violence as police tried to keep opposing groups separated. They turned out in opposition to pro-Trump groups rallying to protest the results of the election, which show a Joe Biden victory.


COVID According To MSM

Joe Biden has spent these early days as President-elect pleading with Americans to pay attention to the relentless surge of Covid-19 -- with deaths averaging more than 1,000 a day in the past week -- as President Donald Trump continues to ignore the deepening crisis and touts the promises of yet-to-be-approved vaccines as his panacea.

subscribe to The NPR Politics Podcast podcast House Democrats started this month hoping, and preparing, to gain seats in the election. Instead, their once robust majority in the House has dwindled and Democrats are on track to begin next year with the slimmest majority in decades.


Reporters On The Run

MSNBC Reporter Alarmed as Million MAGA Marchers Shout Down Her Live Shot: 'They're Following Us and Chasing Us!'

Supporters of President Donald Trump protesting in Washington on Saturday spotted a live MSNBC report taking place, and quickly approached and began shouting "fake news" at reporter Ellison Barber, who became alarmed as they pursued her and her crew. Barber was reporting from the street, describing the scene and saying that the event was organized by The Proud Boys.

NEW YORK - According to a press release for the campaign of President-elect Joe Biden, Pope Francis and Biden had a phone conversation Thursday morning where they discussed working together on issues such as equality, climate change and immigration.

Do you look forward to cheesy holiday movies every year? Get a smile on your face when eggnog starts appearing on the shelves? If you are excited about the Christmas season all year long, then we've got some great news for you: Santa's Bakeshop is now open in Martin City.

Food Critics: Where To Get The Best Pie In Kansas City In 2020

In 2020, we're as divided as we've ever been. And don't think that doesn't extend into the dessert realm. Every year around this time, KCUR food critic Carlton Logan has the same tense debate with his friends: sweet potato pie vs. pumpkin pie. They're no closer to having a definitive answer today than when they started.

A cold front will move through the area this evening. Scattered strong thunderstorms are possible along the front. Right now, it appears as if the best chance for thunderstorms will be east of the KC metro. The cold also front ushers in a chilly air mass overnight with temperatures falling into the upper 30s and a chance for scattered rain showers.

JC Pose by Soundgarden is the song of the day and this is the OPEN THREAD for right now.

When the Pope was questioned about liking a raunchy Instagram photo of a woman he replied, "Thatsa beega teetsa."

everyone is staying put in their homes because of the economy, loss of income and business is not a good time to move. So the douche realtors make the prices higher because there is 'low inventory'?

"near unpredictable" result of bad economy, incredible. So unfortunate for realtors people were not forclosed in droves like 2008. Damn covid relief.

No worries there is still crisis & time to turn everyone into rentals owned by hedge fund companies.

grocery stores should have charged $50 for a 6 pack of toilet paper.