The "logic" of the newspaper KCMO counting methodology should be highlighted because it offers yet another attack against law enforcement that doesn't correspond to any data set or official confirmation.

The so-called Kansas City paper of record is counting "officer-involved" shootings in their homicide numbers.

It's a sad story that deserves mention but doesn't correspond to reality.

As of this writing, here are the latest homicide stats from KCPD which are then reported to the FBI at the end of the year . . . 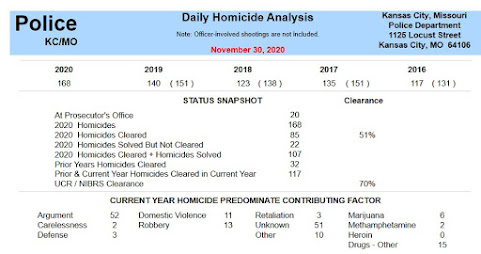 Again, this is data point is important in an era when both progressives and conservatives fight about disinformation and the very nature of reality.

All of the local TV news outlets have parted ways with the Kansas City Star and use police stats to record KCMO muders rather than the skewed dead-tree methodology wherein "journalists" are accountable to NO ONE.

Accordingly, this is a big part of the reason that both subscribers and advertisers have abandoned the publication.

During a historic homicide spike, the Kansas City Star is publishing inaccurate information and their news content can no longer be trusted to offer objective reporting.

An editorial stance is one thing but these skewed stats feature so-called journalistic content basically calling out police for murders in shootings that have been ruled "justified" . . . It's a dangerous allegation to make and one that has been mostly unquestioned by local media.


The red star is counting police shootings as homicides. But hey guess what happened? Some women were destroying a BLM street graffiti and guess who they called? The police. How funny is that?

Still no call for BLM to call out the people responsible for the majority of murders. Weird

Where are they working out of now, commiefornia?

The only newspaper worth reading is the Wall Street Journal.

When is the piece of shit Star going out of business? The sooner the better.

^^^ They got way more money than you CHUD. You'll be out on the street first. Thank your papa Trump.

Nothing screams "intellectual" more than the word "CHUD."

I was going to buy one issue of the Star because there's another run on TP in the stores and I needed an alternative, but now I'm saving my money for filling the gas tank under a Biden/Harris Green New Deal and $6/gallon gas. Those Dems really know how to cheat well in a presidential election. Hats off to those crazy, cheating bastards.

Don't link to articles on kansascity.com, nobody is paying for that horseshit

And they wonder why folks don’t read.
Readership at all time lows
Neighbors who get the paper in their driveway are made fun of
People pissed at the left ways... Catholic-hating as well

Yet they continue to provoke and kiss off Law Enforcement.

The Star has been a sickle and hammer rag for decades. It has only got worst and you'll see the day that the KC Star will be gone for good. Think the Queerbait millies are going to keep it a float ? Only Byron would think that far out of the shit box.

The biggest question of all is why has there been a minimum of 20 homicide cases sitting at Jeans office for at least the last month for review. I understand all cases need to be determined to have probable cause for charging but that’s a lot of murderers on the street while they’re dragging their feet.

I'll tell you again Yell A-Boo-Hocka is secretly directing the Star from a bunker with help from Lewis Doo-Good.

^^and you're still trying to find BBC for your wife aren't you Charlie?

Star reporters are like football players who have lost the game and just start throwing punches in the last minutes. Reporters know the end is near for the Star so they just are just attacking everyone they hate.

They teach college students to be far-left journalists with totally disregard for real, honest news.

These Professors are so stupid their education techniques is making all of the newspapers go bankrupt.

Television media will soon be next as most conservatives tune out network news stations as they are so far left with their lies and mis-information.

You have to be really, really stupid and uninformed to believe the shit that comes out of CNN, ABC etc.

^^OK Boomer. Go back to OAN please. Matlock will be on soon.

^^ OK Nancy. Go back to "The View". Anderson Cooper will be on soon.

I ran several of Boomer Hater/Geezer/Pops/Geriatric Fu*ktard/Old People/Weird/CHUD boy's comments through an online age detection app for written materials and it showed in the results that he is only 10 years old. You can tell his age by his lack of writing skills and his frequent temper tantrums. I'm guessing he dropped out of elementary school and his mother doesn't know what to do with him, especially when he continues to wet the bed and fill his diaper. For his welfare, we’ve started a GoFundMe page titled “Save the 10-Year-Old Bed-Wetting Dumbass."

8:02. Copro boy is the idiot son or nephew of Lucas PR firm owner. Known to gofer chris h. as well.
Big reveal will be matching Sly James PR firm, from campaign filings, with Lucas filings.
Having nothing positive to contribute, they poison the pond of discourse in pathetic effort to defend Lucas as they tried to defend Sly.

^^Huh?? Sorry, I don't speak stroking out geezer. Have your nurse translate.

^^^It's impossible to dumb it down far enough for you to understand it. Skip the hard posts and concentrate on the monosyllabic ones.

^^ha ha! You got knocked the fuck out. Silly geezer.