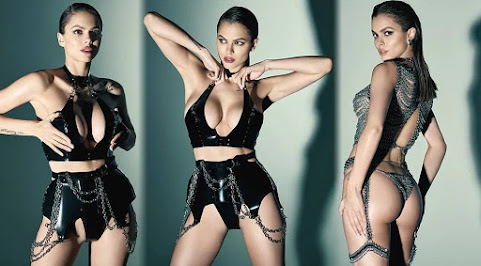 With a clear sky of moonless night, expect great conditions for watching the Leonid Meteor Shower in the Kansas City metro area and surrounding parts of the region.The Leonid Meteor Shower is expected to produce 10 to 12 meteors per hour, or more if you're away from the city lights and less if you're in downtown Kansas City.The Leonids are famous for producing meteor storms, meaning thousands of meteors streak across the sky every hour.


Golden Ghetto NEXTGEN Back To Learning At Home

SHAWNEE MISSION, KS (KCTV) - Middle and high school students in the Shawnee Mission School District will return to remote learning. "As you know, the number of COVID-19 infections in Johnson County has been rising dramatically over the last several weeks.

ARROWHEAD WHERE ESPN IS REPORTING. THE CHIEFS HAD PLACED OFFENSIVE TACKLES, ERIC FISHER AND MITCHELL SCHWARTZ PLUS OFFENSIVE.

Russian Model Viki Odintcova Strips Out Of Her Leather Trench, Wears Nothing Underneath

Social media star Viki Odintcova stunned her 5.1 million Instagram followers after posting a picture in which she appeared to be undressing from a chic leather trench coat. The jacket was a rich black color, and the shade not only highlighted the Russian model's glowing skin, but also added a sharp contrast to the photo.

The White House will bring home 3,000 troops from Afghanistan and Iraq by the end of the year against the guidance of top military officials, a drawdown order which will reduce the American presence by about a third, from 4,500 to 2,500 in Afghanistan and 3,000 to 2,500 in Iraq, according to a U.S.


GOP Against Draw Down

Republicans livid over Trump's plan to reduce troops in Afghanistan

Other Republicans agreed with McConnell on Monday. "The concern would be it would turn into a Saigon-type of situation where it would fall very quickly and then our ability to conduct operations against terrorist elements in the region could be compromised," Sen. Marco Rubio (R-Fla.), the chairman of the Senate Intelligence Committee, said in a brief interview.

Top Senate Republicans seemed unmoved Monday by President Donald Trump's baseless charges that the election was "rigged" and his false assertions that he actually won the election, even though the results show he lost the race despite his efforts to sow distrust over a cornerstone of US democracy.

WASHINGTON (AP) - Hate crimes in the U.S. rose to the highest level in more than a decade as federal officials also recorded the highest number of hate-motivated killings since the FBI began collecting that data in the early 1990s, according to an FBI report released Monday.

Obama on bipartisanship: 'There is a way to reach out and not be a sap'

Former President Obama said in an NPR interview aired Monday that President-elect Joe Biden will have to reach across the aisle and pursue "bipartisan cooperation," despite GOP-led efforts to delegitimize his election.

INDIANAPOLIS - The NCAA announced Monday it plans to hold the entire 2021 men's college basketball tournament in one geographic location to mitigate the risks of COVID-19 and is in talks with Indianapolis to be the host city. The Final Four is already set to be held in Indianapolis next year and the NCAA has [...]

KANSAS CITY, Mo. - Beginning Monday, small businesses within Kansas City, Missouri's Center City Economic Development special taxing district are eligible to apply for grants of up to $10,000. The district covers much of the city's East Side, from 9th Street to Gregory Boulevard between The Paseo and Indiana Avenue.

Warm Up This Week

Tuesday looks sunny with highs in the 50s

Hide Transcript Show Transcript ALSO IN CLINTON AND ON THE KANSAS SIDE. 63 FOR OLATHE 64 IS 4 LAWRENCE AND GOING DOWN TO IT OTTAWA YOUR EVENING FORECAST HAS THIS DIPPING INTO THE 50S AND STAYING THERE FOR A FEW HOURS BEFORE FALLING OFF TO 49 DEGREES BY 8:00 AND THEN BY 9 O'CLOCK 47 DEGREES.

Local Jobs: Check Out Who's Hiring In The Kansas City Area

Kansas City, MO - Though the economy has taken a tumble amid the COVID-19 pandemic, many local employers in the Kansas City area are still searching to fill openings on their staff. Whether you're looking for full-time or part-time work, we've got you covered.

Kip Kendrick will join Kansas City's Senator-elect Greg Razer's office, serving as his Chief of Staff. For the past four years, Razer and Kendrick served in the Missouri House of Representatives. They were on the budget committee together for three of those four years. Kendrick currently represents District 45 (Columbia) in the Missouri House.

KANSAS CITY, Mo. - A gust of wind blew a small plane off the runway at Charles B. Wheeler downtown airport Monday. According to an airport spokesperson, a Piper Meridian Aircraft had landed on runway 19 around 10:30 a.m. when it reportedly caught a gust of wind, pushing the aircraft off the east side of the runway into the grass.

2:01 PM ET Adam TeicherESPN Staff Writer Close Covered Chiefs for 20 seasons for Kansas City Star Joined ESPN in 2013 The Las Vegas Raiders took a victory lap of sorts around Arrowhead Stadium in October after beating the Kansas City Chiefs 40-32 for their first win in the rivalry since Jon Gruden returned as coach in 2018.

KANSAS CITY, Mo. - An F/A-18 with the U.S. Navy's Blue Angels will perform a "carrier break" Wednesday morning over the skies in southern Johnson County. The visit by the U.S. Navy Flight Demonstration Squadron jet fighter, Blue Angel #7, is part of the buildup to the 2021 KC Air Show presented by Garmin, which will take place July 3-4, 2021, at New Century AirCenter just north of Gardner.


Hand Up For Holidays

KANSAS CITY, Mo. - As many families struggle to make ends meet, one organization is hoping to meet their needs for the holidays. 2020 marks the 25th year for Operation Breakthrough's Christmas Program. It includes a holiday store that provides gifts for hundreds of children and teens in Kansas City, Missouri, but CEO Mary Esselman said its impact reaches far beyond Christmas Day.

curiousKC: What is the history of the Rosedale Arch?

Driving south on Interstate 35 from downtown Kansas City and across the state line, look to the hills on the left at about 7th Street Trafficway. That stone monument up there in the trees? That's the Rosedale Arch. Look closely, though, because even born-and-raised Kansas City, Kansan and curiousKC reader Bea Springer admits the 35-foot-tall monument is hard to find.


Another End Of An Era

The fans of the Kansas City Athletics had - what's the right word? Endured? - a 13-year love/hate affair with their baseball team. To clarify, I think they loved the players, they just felt continually burned by the ownership. In the early years, fans poured into Municipal Stadium to witness Major League Baseball.

infinite bucks for BLM. That's not a great plan.


Funny how the blacks in the city get by with discrimination but the white people get crucified for nothing and accused of things that aren't true.

The Kansas City Chiefs suffer losses when they disrespected this country that has been so good to them. They are scum. The lowest of the low.

If Obama wants to reach out he needs to keep his ignorant mouth shut. He speaks out of both side of his mouth one minute bashing the right and the next putting out this reaching out BS. He points a finger at Trump calling him a dictator but yet Obama is the one that force a dictatorship down our throats by making people pay a penalty if they didn't buy insurance and making people pay for someone else's abortion with their tax money. That's a dictator. Oh and it was Obama who colluded with Russia not Trump. Remember when he whispered in Putin's ear?? Wait until after the election when I have more leverage.

^^Idiot, by denying them their constitutional right to protest you are scum.

They didn't disrespect anything, but you are disrespecting them, our country & our constitution.

When Viki put on a show in the graveyard, she pulled plenty of boners!!!

From the Paseo to Indiana is not the east side. It’s just another grifter program for the do nothing koloreds.