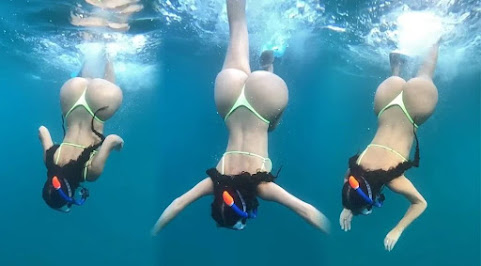 Right now the underwater antics of hottie Demi inspire our search for truth as we share community news, pop culture and top headlines.

KANSAS CITY, Mo. - With Thanksgiving just a few days away, people are flocking to COVID-19 testing sites around the Kansas City metro. Many hope to gain peace of mind before spending the holiday with family members, although health professionals have warned that one negative test result can give a false sense of security.

One source of our pothole problem: pipes in KCMO cover more area than other major cities combined

The hospital capacity in the Kansas City area is improving but there are still major signs of trouble. The issue is not the number of available beds. Forty percent of the beds in Missouri hospitals are open. In Kansas, it's about the same.

Runway star and social media maven Demi Rose gave her 15.2 million Instagram followers a whole new look at her shapely physique with her most recent full-motion share. The post, which went live on her timeline on Saturday afternoon, included an underwater capture of the diminutive 25-year-old snorkeling in a skimpy, neon green bikini set.


And So It Begins

U.S. General Services Administration chief Emily Murphy informed President-elect Joe Biden on Monday that her agency has formally ascertained him as the apparent winner of the 2020 presidential election and would move ahead with transition proceedings.

Behind the scenes, Trump frustrated with his legal team's maneuvers

WASHINGTON - While President Donald Trump has publicly praised his legal team's efforts, he has privately expressed frustration with the slapdash nature of his election defense fight, according to several people familiar with the discussions.

General Motors has announced that it is withdrawing from the California emissions pre-emption litigation spearheaded by the outgoing Trump administration. In a letter signed by Chairman and CEO Mary Barra to 11 environment organization leaders, the company also urged other automakers to join its departure while throwing its full support behind the incoming Biden administration.

Archaeologists working near the ancient city of Pompeii have uncovered the remains of two men who were likely trying to find shelter during the catastrophic eruption of Mount Vesuvius in 79 AD. When Mount Vesuvius erupted nearly 2,000 years ago, the volcano played a cruel trick on the people living nearby.

Following the death of longtime "Jeopardy!" host Alex Trebek earlier this month, the quiz show has now announced it will resume production, with a new interim host in the meantime.

After 118 days in the hospital with COVID-19, Kansas City man is finally home just in time for the holidays

(CNN) -- No one expected him to be home for the holidays -- but after 118 days in the hospital with COVID-19, Darell Slater will spend Thanksgiving with his family. Slater, 71, was first diagnosed with COVID-19 on July 13 along with his wife, his family said.

Hide Transcript Show Transcript FIRST ALERT DURING THE EARLY MORNING HOURS. OTHERWISE, IT'S JUST GOING TO BE KIND OF BREEZY AND SHOWERY WITH TEMPERATURE. ACTUALLY RISING BECAUSE OF A WARM FRONT THAT WILL BE PASSING THROUGH THE AREA AND TURNING OUR WINDS AROUND A LITTLE BIT MORE.

Maybe a bit too big.


Sorry but I can't have compassion for anyone who wears NFL clothing. Disgusting.

And Tony please, that butt. Come on man.

TOP PHOTO
THERE'S THE LARD!
Tony just enabled all the Basement Boi's sex lives!
How the hell does Demi get all that grotesque blubber submerged?

So, is that an excuse for not keeping those piper serviceable.

Apparently, instead, we need to sink more taxpayer bucks into empty (shiny) hotels, a new non-used airport, a non used toy train and millions (more) invested in 18th and Vine where no non-BLM person of sound mind would be caught (shot), even in daylight, and of course Power & Light.

Street, sewer and water line work is not glamorous and will not get our civic leaders into the national spotlight.

We need shiny stuff. Maybe an NBA felon team, or a downtown baseball scam to reward certain construction firms. You know, really neat stuff like that.

The guy spends 118 days in the hospital because of COVID and no one in his group is wearing a mask?????? Does anyone see a problem here?

Rheumatoid arthritis and Parkinson's disease two things you're never cure from so 118 days being sick was more to do with what was wrong with him to begin with. Sounds like him and his wife both live unclean lives if they both tested positive for it. Some time after more than enough warnings had been in place to educate people.

so they weren't rubbing one last nut off when they got covered with ash?

When snorkeling with Demi, we discover booty every time!!!

Caption Guy is vastly underappreciated around this dungheap.

He consistently casts pearls before the feral swine with a yeoman's effort.

Instead of believing Foxnews story go on line and read the letter that was sent to Biden by GSA.

If the idiot Dems keep locking everyone down we're all going to look like the Mt. Vesuvius victims which is just how they'd like it.

Trumptards, where are we at on the following?
Releasing the kraken and blowing the lid off of this widespread voter fraud
Obamagate
Durham Report
Hunter's laptop

I was assured Democrats would be arrested and tried for treason. I'm getting really tired of waiting.

The top pic is probably my fault. I busted Tony's chops the other day for posting pictures of manatees in swimsuits. Damn if he didn't do exactly that.