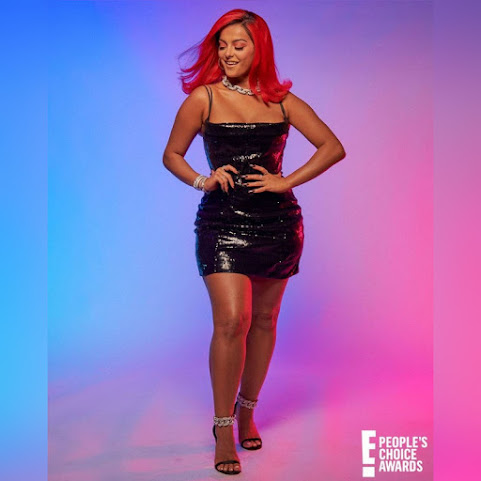 For TKC readers tonight we share a peek a hottie Bebe redefining celeb presenter trends which, in turn, inspires this peek at pop culture, community news and top headlines.

We're beginning to see a surge in coronavirus testing and if it continues at this rate, we could run out of supplies. According to medical officials the demand for COVID-19 testing throughout the region is extremely high, and in Johnson County experts say it is off the charts.

Police investigate at Denver and Lyon

Police are investigating a death at a home near Denver and Lyon Avenues Wednesday afternoon. Crime Scene Investigators arrived on the scene at 3:40 p.m. Lyon Avenue was closed between Denver Avenue and Hardesty Avenue from 2 until 4:15 p.m. The deceased's fiancée's mother said his name was Eric.

Some metro residents ready for coronavirus vaccine, but others say they'll wait

KANSAS CITY, Mo. - As Kansas City Hospital beds fill up and mandates are strengthened, all eye are on a coronavirus vaccine. One of the companies producing a promising solution said it now has the required data to request emergency use of the vaccine. It's appealing to some, but not everyone.

Bebe Rexha stood out from the crowd, wowing in a tiny sequinned mini dress as she posed up a storm at the glam event.

Biden says GSA should declare him the election winner

President Donald Trump's reelection campaign on Wednesday said it will file for a partial recount in Wisconsin to challenge President-elect Joe Biden's victory in the state. The announcement came after Wisconsin election officials confirmed that the Trump campaign wired $3 million there ahead of the 5 p.m. deadline to file for a recount.

Much of Wall Street views the Trump campaign's efforts to overturn the election results as a desperate sideshow destined to fail. But JPMorgan is telling clients there's still a chance that this process descends into chaos. It is 2020, after all.

Dolly Parton addresses her big donation that led to a coronavirus vaccine: 'I just wanted it to do good'

Dolly Parton spoke out after fans credited her with helping to cure the coronavirus. In April, Parton shared that she donated $1 million to research being done at Vanderbilt University in Nashville, Tenn.

The weirdest, worst year plods on, with Thanksgiving looking like it will reflect all that is 2020: pretty disappointing, disjointed, probably spent at home. While we recommend staying put at home rather than going out, we do also (highly!)

KANSAS CITY, MO (KCTV) -- From carrying out the democratic process, to saving lives, the Kansas City Chiefs are proving Arrowhead Stadium is for more than just football. It's been a busy month for the home of the Super Bowl LIV Champions.

Hide Transcript Show Transcript MID-60S AND THAT ARE NORMAL HIGHS SHOULD BE IN THE LOWER 50S, AND WE'RE NOT EVEN GOING TO GET THERE IN THE NEXT HOUR BY HOUR FORECAST. SEVEN PM 59 DEGREES NINE O'CLOCK. 58 SO WE DON'T DROP THAT MUCH AT ALL.

KANSAS CITY, MO - Mia Ramsey survived her bout with COVID-19 more than two months ago, but she is sounding the alarm as she continues to deal with extreme fatigue and memory problems. Ramsey hopes her story will help remind people who are weary of social distancing why it's worth the effort to wear masks and wash hands, helping themselves and others avoid the pain and suffering so many experience because of COVID-19.

Saint Luke's Health System is reporting more COVID-19 cases, with 181 patients being cared for now."I can't say that there isn't fatigue weighing in and the emotions of having to deal with a staggering number of patients in a prolonged pandemic, but our team is strong.

MISSION, Kan. (AP) - Kansas health officials on Tuesday urged communities to take stronger action as more hospital rooms are devoted to caring for coronavirus patients and hundreds of doctors, nurses and other workers are quarantined, leading some surgical procedures to be delayed.

KANSAS CITY, Kan. - The director of the Kansas Department of Health and Environment (KDHE) is urging people to host virtual Thanksgiving celebrations as the state fights the COVID-19 pandemic. "If we screw up during Thanksgiving and have a huge surge of cases, December is going to be bleak," Dr. Lee Norman explained.

The University of Missouri-Kansas City announced Wednesday it will transition from in-person classes to online beginning Nov. 30 for the remainder of the semester, including final exams. UMKC said exceptions will be any clinicals, labs or other experiential classes that have been in-person.

The University of Missouri has settled its lawsuit against six companies involved in the construction of now-demolished student housing at 5050 Oak Street near the UMKC campus. Terms of the settlement were not disclosed, but the case was dismissed on Tuesday after the university said it had resolved its claims against the companies.

It was two years ago today - November 18, 2018 - when Alex Smith 's life changed. The former Kansas City Chiefs quarterback had led the Washington Football Team - then known by another name - to a 6-3 record during his first season as the team's starter.

Hallmark giving away one million cards to thank educators

KANSAS CITY, MO (KCTV) -- Here's a chance for all of us to show our appreciation to those making education possible during the pandemic. Hallmark is giving away one million 'thank you' cards for teachers, administrators, coaches, and other school staff.

Trump's "case" is being thrown out of court all over the nation.

Don't equivocate. He's a sore loser. He will be out of the white house soon.

No it's not commie moron it's the liberal judges in the lower courts, and that's to be expected from you china commies. Trump won the election by a huge amount and that has been proven. The commies in WI are so scared they are now trying to change the re counting laws. This goes on to the supreme court next idiot.

Any chance we can got something other than a Ball Park Frank for a hottie?

Biden may eventually be president
But right now there are still legal questions to be answered
I can’t see how Biden, after declaring himself, the winner, wouldn’t want an accurate count to show everyone that he won fairly
Besides, it looks as though trump is simply trying to keep Biden from getting 270 electoral votes which would put the election to the House of Representatives. Once there, it is up to the 50 states delegations to decide to winner. And the GOP controls most of the legislatures. So guess how that will turn out
Personally, the only thing that points to massive fraud, is that trump won about ten million more votes than in 2016 and he gained house seats
Biden wins more than ten million more votes than Hillary did in 2016 and lost house seats and didn’t pick up any legislatures or governorships
Now just how can that be even remotely possible?
I’ve never heard of a party winning the president and losing house seats? That is why I’m sceptical

This comment has been replaced by a blog administrator irritator. 😏🍿

The governmental reaction to this virus has got to be one of the biggest BOONDOGGLES in decades.

The coronavirus only kills approximately 1% of those exposed to it, and nearly all of the deaths are in the 80-85+ age group who are living in care facilities. These are people who are already typically frail and in declining health, with other health conditions impacting their lifespan.

Seasonal influenza that occurs every year in this country, claims a similar number of primarily older Americans who are susceptible to the risk.

Why in the world have public schools been closed? Young people do NOT die from coronavirus. However, when you pull them out of school, their intellectual/social/emotional progress is drastically retarded. In Kansas, the actions of Governor Kelly and KDHE director Norman are crimes against humanity. They've known better from the beginning, but voluntarily chose to subject Kansas residents to a torture protocol.

Similarly, in KCMO, Mayor Lucas and KC Health director Archer are the Dumb and Dumber characters come-to-life. Two willful incompetents, continuing to draw their taxpayer salaries in full throughout the year, imposing non-scientific draconian restrictions upon those they've sworn to serve. Traitors.

The person who invented the PCR testing process (1984-Kary Mullis) specifically said that it should NOT be used as a diagnostic clinical tool. All the regional labs (to my knowledge) that are doing the coronavirus testing are performing the procedure in a manner which is NOT recommended by research virologists/immunologists. An extremely large percentage of people tested are being informed that they tested positive, when in fact, they do not have active virus in their system and are thus incapable of transmitting it to others.

Fear is a potent weapon to control people. It is a favorite tactic employed by those who seek to impose their will upon a public, that under normal circumstances, would quickly reject the overture.

It worked on you.

yet she went on to fame , fortune, and awesome generosity..

The definition of hottie seems to have suffered gross expansion.

SERVING TURKEY DAY
Kravin It KC has an offer of ham AND turkey for $135 AND they deliver!