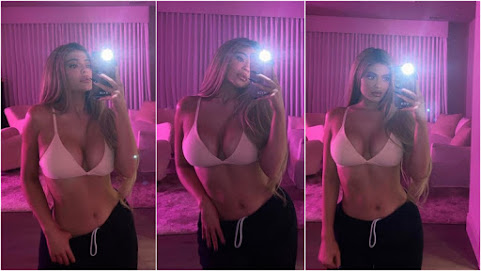 People frequenting downtown Kansas City might do a double take next time they walk past the Sprint - ahem - T-Mobile Center. A new sign went up on the building Wednesday with its new name emblazoned in T-Mobile's signature magenta. Workers installed the sign on the center's southeast facade letter-by-letter with a crane.

The Giving Grove organization is providing fresh food, building communities, and offering sustainable food infrastructure by planting assorted fruit trees. Picking the pears, apples, and peaches can begin in as little as three years and The Giving Grove trains community stewards in how to maintain their new orchards.

Kylie Jenner revealed what she wants to be when she grows up - if she wasn't already a billionaire and the fifth most-followed person on Instagram. In a new YouTube video, the reality star shared with fans that her dream job would to be a makeup artist.

President Donald Trump met with his top election advisors on Wednesday as his chances for reversing an apparent win for President-elect Joe Biden in the race for the White House looked increasingly daunting.

Biden poised to announce his chief of staff as early as Thursday, with Ron Klain the leading finalist

President-elect Joe Biden is poised to name his White House chief of staff as early as Thursday, with longtime adviser Ron Klain the leading finalist for the post, three people familiar with the matter tell CNN.

Coronavirus hospitalizations in the US reach record high, data shows

AOC hits back after top Dem reportedly asks 'Do we want to govern, or do we want to be Internet celebrities?'

Rep. Alexandria Ocasio-Cortez, D-N.Y., pushed back on Democratic leadership Wednesday, after they questioned whether or not the progressive wave, which has caught widespread attention, is actually beneficial to the party or to blame for the recent loses in the U.S. House of Representatives.

New Yorker fires Jeffrey Toobin for exposing himself on Zoom

Jeffrey Toobin, who is also senior legal analyst for CNN, confirmed in a tweet he had been sacked.

COLUMBIA - Saturday's game between the Mizzou Tigers and Georgia Bulldogs has been postponed, the SEC announced Wednesday morning. In a tweet, conference officials said the postponement was due to "positive tests, contact tracing and subsequent quarantine of individuals" within Mizzou's program.

"Having a boost from this grant will just amplify the work I've already been putting in; no excuses to slow down now," Kansas City maker Whitney Manney said of the prize money and its timing amid the lingering COVID-19 pandemic.

Thursday will be mostly sunny, highs in mid-50s

Hide Transcript Show Transcript HOUR-BY-HOUR, 51 AND THEN I DROPS QUICKLY BECAUSE WE HAVE DRY AIR OUT THERE SO WE WILL BE IN THE 40'S FOR A WHILE. TEMPERED A LITTLE BIT BY CLOUD COVER MOVING IN TOWARD THE TAIL END OF THE EVENING, WE WILL DROP TO 41 DEGREES BY A LATER TONIGHT.


Biden's lead is not enduring the radical left propaganda doesn't stop. The radical left are getting shaky they are intimidating people who are going to come forward who witnessed the voter fraud. They should have known better than to pick on Trump. Defiantly a hot mess but don't expect Trump or his supporters to give up on this there is waaaaay too much information on the radical left and their cheating . We were prepared for this we knew they were not going to let Trump in for a second term.

AOC has been threatening to come after all Trump supporters. Just what she is going to do is anyone's guess she's about as crazy as my old neighbors in Hyde Park.

^^And yet there is no voter fraud, Trump’s out on January 20th, and you’re a delusional fucktard. Weird.

I am going to LOVE watching AOC, the Squad, blm, Antifa and every other kook group eat the Demonrat party! 😏🤣🍿🥨🍺

8:53 There is a 92 percent you are wrong. We will know by the end of November. Home Land Security Had a sting going on during the Election. They will present there evidence next week. You

Pink trim on the Team Mobile Arena how cute. Fits the fag and pinkos that frequent the area.

...Toobin learned all his sex tricks from your 'RumpMonkey leavin' the Whitehouse....
Your voted for Trump with your rump!
now pull up your Depends, and sit in it!\
...Right Tranzy Bird?

Retro rocker-you're so fucking dumb. You have never been right about anything you have ever posted. Your sole purpose on this blog is to provide comedy relief with your retarded takes. You only exist for us to beat like a rented mule.

If I understand the barely comprehensible Bandit/Chuck/Retro post @10:24 last night, Trump's Tinfoil Hat Brigade now has another "Deus Ex Maniaca" that is going to save The Donald's impeached and rejected ass.

This time, according to B/C/R, Homeland Security has been conducting a "stealth" investigation, and its results will overturn the duly-held Election that has Trump making a fool of both himself and this Country.

Trump supporters squealed from the rooftops about "The Durham Report", a "nothingburger" that had no results, the Senate Republicans held a "Ukraine Investigation" that failed to find any wrongdoing, although the Tinfoilios lie about that FACT incessantly.

Now Homeland Security is going to gallop onto the scene on a White Horse and rescue poor virginal Donald, who the villains (called the Voters) have tied to the Railroad Tracks in front of the oncoming Train of the December 13th Electorial College vote.

Well guess what, Chumps - the Supreme Court doesn't have jurisdiction in anything relating to this Election until lower Court have ruled, those ruling have been through the Appeals Process, and those Appeals rulings have in turn been appealed to "The Supremes". And The Donald is out of time!

In order for the "miracle" you so fervently squeal about to happen, the Supreme Court would have to set aside all Legal Precedents and ignore the Constitution!

And overturning the Constitution like that would mean the destruction of the United States of America!

So... sorry, Pals, better luck with the next unqualified tin-pot would-be Dictator you gerrymander into Office.