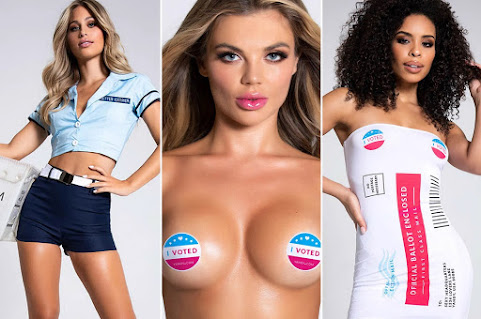 Tonight we roundup other news links in the shadow of this election hot mess carnival of blunders that's currently in the making.

KANSAS CITY, KS (AP) -- Voters in Kansas made their pick for president while holding negative views about the country's direction, according to an expansive AP survey of the American electorate. The race between President Donald Trump and Democratic rival Joe Biden concluded Tuesday as the nation remains in the throes of a global public health crisis and mired in the economic downturn it brought on.

Arrowhead Stadium opened up as a polling place in Kansas City on Tuesday, thanks largely to Chiefs star Patrick Mahomes. Mahomes and his foundation split the $100,000 bill needed to open up the stadium to voters - something he didn't think twice about.

KANSAS CITY, KS (KCTV) -- This year marks 100 years since women in America earned the right to vote through the 19th Amendment. It passed August 26, 1920. Kansas City, Kansas, voter Lillie Mae Marshall was born eight months before that. She has voted in every single presidential election since she reached voting age.

One counterintuitive reason for the relatively smooth day, Clarke noted, was the coronavirus pandemic. States across the country loosened restrictions on mail-in balloting and encouraged early voting at an unprecedented clip, with roughly 100 million ballots cast before Election Day. That took pressure off in-person voting on Tuesday, and resulted in lower-than-expected turnout on Election Day in some jurisdictions.

One-time QAnon conspiracy theorist Marjorie Taylor Green e has won a House seat, according to race calls by NBC, CNN, and Decision Desk. Her victory marks the first time an open supporter of the bizarre pro-Trump conspiracy theory will hold a position in Congress.

A former Republican candidate for the North Carolina House of Representatives was arrested on Election Day for returning to a polling station in Charlotte while armed and wearing a pro-Trump hat after he had been banned from the site earlier in the day.

A British gambler has reportedly staked $5 million on President Trump winning Tuesday's election - a wager believed to be the largest ever political bet. The former banker used private bookmakers registered on the Caribbean island Curacao for the bet at odds of 37/20 - meaning he could get a $15 million payout, sources told The Sun.

ALL RIGHT. THANK YOU JOHNNY. WILL IT IS ELECTION DAY IN AMERICA POLLS ARE OPEN NOW ON BOTH SIDES OF THE STATE LINE AND OUR COUNTDOWN TO WHEN THEY CLOSE WE ARE TEN HOURS 57 MINUTES AWAY FROM THE FIRST POST CLOSING IN OUR AREA.

On Nov. 1, Kanbe's Markets, a Missouri nonprofit driven to provide Kansas City "access to fresh, healthy foods," launched a month-long virtual fundraiser, "Give Access." The virtual local makers market offers artwork and commissioned services donated by the artists for people to bid on. All proceeds from the auction are then donated to Kanbe's Markets.


No Matter Election Returns, Sun Will Come Out Tomorrow

CLOSER TO THE CITY, 75. AFTER THE SUN LOWERS, 66 BY 6:00 P.M. 63 BY 7:00 AND THE RESULTS WILL START POURING IN AND THE TEMPERATURE WILL DROP. 59 DEGREES. BY TOMORROW MORNING, WE WILL SEE A FEW CLOUDS INTRODUCED TO THE FORECAST.


Shut this Oreo Mahomes up I'm sick of hearing about him funding everything except what he kneels for. The moron is a phony. How much would 100,000 have helped his people he holds so dear? But yet he didn't help them did he? NO and he won't he is a phony.

I told you I keep it trimmed up, that's why I won the popular vote!

.@NicolleDWallace: "You can feel the hopes and the dreams of our viewers falling down and you can hear the liquor cabinets opening all across this great land." pic.twitter.com/PlNGCvo01S

If the libtards can't flip Texas (hahahahaha) this is over. Even if Biden takes the states leaning his way plus Nevada it's mathematically impossible for him without Texas. The states leaning Trump are ones that he won in 2016. Don't see that changing.