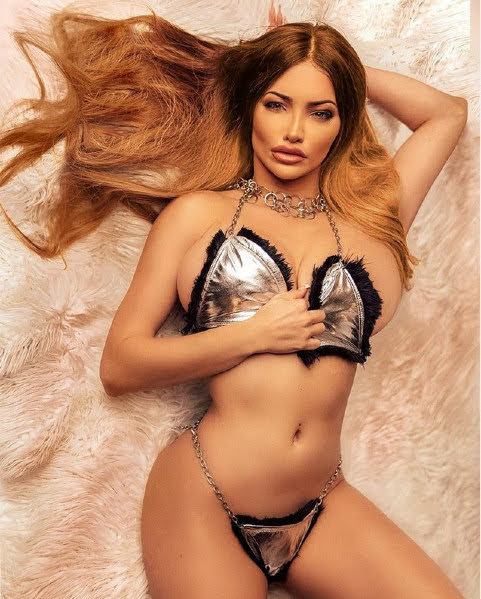 Right now we're inspired by hottie Lindsey offering her tribute to the 1st lady as we take a peek at pop culture, community news and top headlines.

Election Day: What to know before heading to the polls

KANSAS CITY, Mo. - Voters who haven't signed, sealed and delivered their absentee or mail-in ballots, will likely head to the polls on Tuesday to vote. Here are common questions about voting, including what to bring and what cannot be worn. Am I registered to vote? Where is my polling place?

Co-owner Brian Mossman talks about the future of his business. The bigger of his two theaters is open with about one-fifth its capacity, and the future will hinge on customers being comfortable attending movies and the amount of new releases.

LIBERTY, Mo. - Election board directors in Clay and Platte counties are taking proactive steps to make sure they can tabulate ballots as quickly as possible on Election Day. To speed up the process, both election boards will be using devices called central scanners. The scanners take electronic copies of multiple completed ballots per second.

Lindsey Pelas dazzled her devotees by rocking a shiny bikini for a photo shoot inspired by first lady Melania Trump's modeling career. On Halloween night, Lindsey shared an alluring photo of her skimpy costume with her 8.8 million Instagram followers.

At final Trump rally, Michigan supporters reach for victory and brace for unrest

At Donald Trump's final rally of the 2020 campaign, thousands of supporters trudged through muddy fields and waited in endless lines to hear the president speak, on the eve of what could be his defeat - or the start of another four years.

The Vatican says Pope Francis' comments on gay civil unions were taken out of context in a documentary that spliced together parts of an old interview, but still confirmed Francis' belief that gay couples should enjoy legal protections. The Vatican secretariat of state issued guidance to ambassadors to explain the uproar that Francis' comments created following the Oct.

How An Abortion Fight In Supreme Court Could Threaten Birth Control, Too

Abortion opponents were among those most excited by the addition of Justice Amy Coney Barrett to the Supreme Court in October. And they had good reason to be. As a law professor and circuit court judge, Barrett made it clear she is no fan of abortion rights.

On Election Day, Democrats Are Haunted by the Ghosts of Al Gore and Hillary Clinton

Election Day is here. The results? They might not be finalized for a while. And that has lawyers for Trump and Biden preparing for lawsuits, recounts and some odd scenarios that you might never have thought of.

Pumpkin patches and corn mazes are common on the outskirts of cities, but even more rural areas are getting in on the action. There are about 30 pumpkin patches across Oklahoma, according to the state. Agritourism revenue across the country tripled between 2002 and 2017, reaching almost $950 million in 2017 according to an analysis of data from the U.S.

FAIRWAY, KS (KCTV) -- For years, KCTV5 has been a proud sponsor of Project Warmth. Because of COVID-19, Project Warmth looks different this year, but the need for warm coats and blankets is still the same. Instead of the collection sites around the city, Project Warmth is identifying places where your new or used coats, blankets, gloves and scarves can be donated.

Mostly sunny skies and warming up today. Coats for the morning with warmer air and highs near 64 this afternoon.

Donald Trump vs Joe Biden. Epic Rap Battles Of History is the song of the day and this is the OPEN THREAD for right now.

that's way more than a handful.


Very first thing President Trump should do when he is re-elected is eliminate all taxpayer funding of NPR and Public Television as they are nothing more than Marxist propaganda outlets.

Reallocate the NPR / Public Television taxpayer money to feed the poor or buy them coats each year.

Back in the cesspool for a limited engagement to urinate all over the libtards' breakfast, lunch and dinner. 😏🍿

Judgement Day, MAGATs. VOTE HIM OUT! LOCK HIM UP!

Head for the sewer, Republican cockroaches. The sun is shining brightly. Jesus and his followers are taking back the US government. May all MAGATs reflect on your evil ways and make significant changes before God calls you home.

Why not @8:51, the "Dirty Chicken" call is working fine, and it operates the same way!

Hell yes, Bandit/Chuck/Retro - now that you're sobered up a little, give us another forty or fifty posts under each of your "noms de merde", and be sure to use the Emo key a lot, too!

HEY! TRUMP FINALLY GOT HIS WALL BUILT!
Around the White House!

That whole article on ACB is a bunch of what-ifs and maybes splashed all over the place in an attempt to make her seem like an imminent threat to a whole bunch of cases that have already been decided. It is basically fear-mongering from groups who profit from abortion or related groups. Everyone gets a say with their concerns. There is not one bit of rational analysis in the opinion piece.

I regrettably voted for Obama, but the Democrats have gone off the deep end. They’ve become the party of lies, lawlessness, very late-term dismemberment abortions, violence destroying once great American cities, high taxes on our paychecks to pay for socialist wet dreams, weak military, open borders, free healthcare for illegal aliens at taxpayer expense, defunding the police, sanctuary cities for criminals here illegally, taking away guns, sending $1.7 billion of our taxpayer dollars on pallets to Iranian radical leaders to pacify them but were used to kill more U.S. troops, packing the Supreme Court, and more idiotic ideas. No thanks.

^^^^Still boring after all these posts.

And still valid and true. Weird.

And you'll have no effective reply then either, and won't have booze as an excuse. Lol

Maybe the BLM Inc could donate some of their millions of ill gotten booty to Project Warmth to help the poor black families. OH, I forgot that they only give to democrat politicians. Sorry Poor black families.
With all of the protests and riots and looting I figure that those PBF's already got the share I'd normally give.

The libtard posts are amusing as hell. Can't wait until they start finger paining with their own feces. 😏🍿

^^Or you could do the same. Oh I forgot, you're a broken, busted, & bitter geriatric fucktard with no family or friends. It's why you're here all day long instead of doing anything productive.

^^^Nope. Left Kansas Shitty and ceded it to you libtards. Have fun resurrecting it! 😏🍿

^^and yet you're still here. You're a liar. You broke, busted and bitter bitch.

^^And yet you are completely off base as usual. Weird.

^^and yet you're STILL here. Weirder still!

^^Am I supposed to care that you are rabidly pissed off? 😏🍿

^^and yet you do care as you respond to EVERY post. You are so easy to manipulate. Dance for us monkey, dance! Weird.

Amazing! Glad I own NOTHING in the land of fruits and nuts!

Damned fine way to lose your tax base. Ask Kansas Shitty. How far in the hole are they again and how many grocery stores are in the "food dessert"? God that is such a bullshit term!

You know who the tough candidate is. Vote for him.

It’s in that highest calling of leadership that Donald Trump has failed us so miserably.

Now, it’s up to us to overcome his attacks on our very democracy. Knowing nearly a quarter million Americans won’t have a voice - casualties of his lethal lies and incompetence.

Up next on libtard celebrity endorsements is Ruth Buzzy Ginsburg from the crypt. 😏🍿

Altogether false, and you know it.

Report: Dems “Concerned” Biden “Not Showing As Much Energy As President Trump”

^^Trump certainly has. Thank you for acknowledging that. 😏🍿

The MAGA butthurt after this election will be exquisite.

Will New York State flip red? If so, Hillary would have to vote for Trump in the electoral college.

^^Will you ever exist outside your bubble? Doubt it.

You think Hillary is part of the NY delegation of the electoral college?

How dumb are you people? No need to answer. We know from your dumbshit posts.

2:00, one hopes she would do the honorable thing and just slit her wrists. But more likely she would turn rogue elector and vote for herself.

Not that NY will turn red. A deeper blue is more likely.

Someone's a little butthurt over the celebrity endorsements.

He's just sad that since Kayne left the MAGA group, all that's left is the non-Alec Baldwin brothers and Chachi. Where is Chachi?

Political advice from celebutards is suspect at best.

I'm voting for the decent man. The one with good character.

I am all in on Joe Biden. You see the wall that's right next to you, I'll vote for the wall over a guy who tells me that I should pour Clorox into my mouth. Listen, I think we are in deep shit. I think we could have been ahead of this curve."

What's it going to take? I don't get it. I don't think there is anyone left who will vote for him.

There should be a massive rally for Trump supporters where they can ingest disinfectant and all drop dead.

Fuck the celebrities. What does the military and national security people say?

Oh yeah, they endorsed Biden too.

"The current President has demonstrated he is not equal to the enormous responsibilities of his office; he cannot rise to meet challenges large or small. Thanks to his disdainful attitude and his failures, our allies no longer trust or respect us, and our enemies no longer fear us."

Forget the military. What does his long time supporters, appointed staffers and employees have to say?

Oh year, they jumped ship too.

The MAGA roaches scurried once the beat down of truth began.

Bandit is on suicide watch. Just a watch. We'll just watch. Nobody will stop him.