Just for context, we notice that the most active police union in Kansas City is still showing off their endorsement of Prez Trump for election 2020.

To be fair and further down ballot, there are a couple of Democratic Party contenders in their list of selections shared with the public . . . 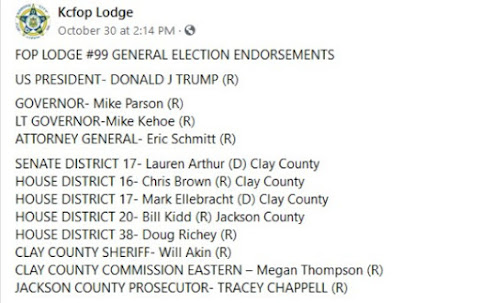 Generally, denizens of law enforcement tend to be a bit more conservative and, in this instance, their ballot proved more successful than most local groups.

Accordingly, we share some top headlines on worsening local violence that persists no matter which candidate claims political power . . .

KANSAS CITY, KS (KCTV) - Pete Coones is really enjoying his first days of freedom. He's catching up with his family and looking at the world through a new lens. Coones spent 12 years in prison for a double murder he did not commit. He's not a murderer-he's a victim.

KANSAS CITY, MO (KCTV) -- A Kansas City man who caused a fatal wreck while running from police back in February will spend the next 18 years in prison. The Jackson County prosecutor says Miguel Ayala was drunk when he tried to avoid being pulled over and hit another car killing the driver and injuring a 3-year-old.

Missouri woman gets federal prison for helping terrorist in Syria

ST. LOUIS - A Missouri woman has been sentenced to four years in federal prison for participating in a conspiracy to help a former Missouri man who died in Syria while fighting for the Islamic State. Sedina Unkic Hodzic, 41, of St. Louis County, was sentenced Tuesday for conspiring to provide material support to terrorists [...]

KANSAS CITY, MO (KCTV) - A Kansas City woman has been charged in the fatal hit-and-run of a pedestrian, who was crossing the street near 43rd and Main Street in the early morning hours of June 21, 2020, Jackson County Prosecutor Jean Peters Baker announced Tuesday. 22-year-old Shabazz L.

KCMO woman sentenced to 2 years in prison for fraud

KANSAS CITY, Mo. - A Kansas City, Missouri, woman has been sentenced to two years in prison after being found guilty on two counts of fraud. Carol Dille pleaded guilty in January to the charges and was sentenced on Friday.

Police identify victim in deadly shooting near 56th and Euclid

KANSAS CITY, Mo. - Kansas City Police have identified a man shot and killed Sunday morning near 56th and Euclid Ave. On Wednesday morning, police say the victim is 59-year-old Theodore Stallings. Just before 7 a.m. officers responded to a shots fired, when they arrived they found Stallings suffering from a gunshot wound, he was [...]

KANSAS CITY, Mo. - A judge in Johnson County, Kansas, heard arguments Tuesday about whether stalking charges against a former Olathe elementary school teacher should be dismissed. James Loganbill is of taking more than 200 photos and 31 videos of one of his fourth grade students last year - mostly of the student's backside.

The federal government filed a lawsuit against Alice L. Holland of Platte County, accusing her of facilitating payments for an alleged lottery scam emanating from Jamaica. According to the lawsuit, the alleged fraudsters call people, many of whom are elderly or vulnerable, telling them they've won lottery prizes but first must pay taxes and fees before they can collect.

KANSAS CITY, Mo. - The family of a woman killed in a drunk driving crash says they are looking forward and focusing on doing something positive in the wake of her death. While the driver is in jail awaiting her day in court. Police and prosecutors say Shabazz Frencher, 22, traveled nearly 100 miles per [...]

So, actually, they did better at picking the winners than the Democrats, Republicans or the newspaper. Interesting.

Po Po endorses Republican because all the liberal Democrats are WEAK on crime and want to coddle VIOLENT criminals.

Covid has killed more, yes MORE, than 1/2 the number of war dead of WWII.

Soon it will have killed more than our WWII war dead.

Trump failed to stop it.

My plan : people stay home and you pay them weekly to do it.

So, the story is that the police union went 10/12 only losing the President race and JACO prosecutor. Both candidates are pro-police and anti-defund the police crowd. Trump won heavily in Missouri. Chappell won in Jackson County, outside of Kansas City. It stands to reason Jean won Kansas City as it’s proven itself to be anti-cop and pro-crime.

The way I look at it they did pretty damn well and their endorsements meant more to the area than most of the others....including the dying local toilet paper of record.

We're not there yet. Fake news. Trump, that man walks on water. He is not God, but God has his back. I love that man and I pray to God that he has his arms tightly wrapped around President Trump. Even though he knew this was coming, this can not be easy. He is doing it for us, and for America. TO see this man step aside from his golden life of billions to protect us leaves me without words, a lot of chills and some tears and I could never be able to thank him enough for standing up for us! GO TRUMP! the fighter we so love...please pray diligently for his safety

The real story is how few Demonrats they endorsed. They've lost support due to their ridiculous defund crap and the promotion of "mostly peaceful protestors" that did billions of dollars in damage to liberal utopian shitholes from coast to coast. Trust takes years to earn, seconds to destroy and forever to rebuild. It's going to be a hard sell to convince them to come back to the Demonrats. They've painted themselves into the same corner with the military. Not my problem.

Stick to your new safe space at Meinspace, MAGATS. Your viewpoint is no longer valid. You lost. Move along, snowflakes.

VOTED HIM OUT! GONNA DRAG HIM OUT! FINALLY LOCK HIM UP!

And the number of Covid dead rises 1,400 per day

God does not have the back of unbelievers.

Jesus would tell Trump to repent or face his judgement and hell someday.

Didn’t rapey joe have his wife and daughter killed so he could keep having sex with his babysitter.

Trump isn’t a baby killer like dementia joe is, and you people are proud you voted for him. Sick.

Donald Trump has never exhibited any outward signs of having a faith in God. Did he ask for a nationwide day of prayer when Covid appeared? No.

Trump has not beared any fruit of rightousness. If you compare Trump to others who are true Christians - he looks pretty pagan and worldly.

And yet you voted in the most crooked, lyin cheatin politician on the planet. God doesn’t like murderers and baby killers either. Weird.

Great information, 11:22. Now do cancer, heart disease and influenza. You can be the site's disease monitor.

When Trump cut off direct flights from China, Biden labeled him a xenophobe. So Biden would have done less to avoid the spread of Covid than Trump did. But I'll bet you voted for Biden anyway, didn't you?

If you didn't have double standards you would not have any at all.

^^and yet let all those planes from China in with all the COVID-infected Americans in. Look it up. Not one plan from China was ever banned. Weird.

Why do the Police support Trump when he has broken so many laws and lied? He was BEST FRIENDS with Jeff Epstein. This destroyed my faith in Police as good people.

^^^Only a naive fool would believe that you ever had faith in police as good people.

Trump is NOT a baby killer? Ask his many girlfriends over the years what they did when they got pregnant. I see no kids born to those women.

12:23 So you think he should have abandoned all those U.S. citizens in China? Fucktard.

Trump has dated so many women in NYC and Boston and I am sure some got pregnant and then had abortions. His Penis is his main hobby.

^^So you think it was OK for them to come back here with no quarantine or any sort of tracing whatsoever, and spread it to Americans? Idiotic fucktard?

Here is Trump's exact quote from a video taped interview he had prior to the election. You may google this is view his every word. He PAID for an abortion which killed a child (and it might not have been his-it could have been another father's). See this:

"What happened with the woman — and I treated her very well — was she threatened to kill herself unless she had the abortion. I think she was unstable, probably was. I mean I don’t know for sure, but probably, and while I’ve always, always been against the taking of a life, I made the decision to give her the money because I was afraid she’d do herself in. Some women do. In fact I gave her way more than she needed, so she could relax and vacation or do whatever she wanted after the procedure. Was the baby mine? She says so. I doubt it but I decided not to contest it. That’s what kind of person I am. Unlike Bill Clinton and his dealings with women — and he treated them very badly — I was very nice to her. I’m always nice to women. A gentleman, really. I’m very proud of myself for that.”

Yeah I saw that interview. He completely admitted he paid for an abortion and then treated the lady to a great vacation and luxury lifestyle. She worked for Donald Trump at one of his smaller business venture.

The interview is still on Youtube. He paid for an abortion

Trump said it was not his kid. So I believe him. He was nice enough to help out a girl in need of an abortion. He gave her, what was it, maybe $6,000? Thats pretty generous and caring. The doctors killed the baby - not him.

That was just Trump giving money to an employee. Nothing more. She asked him for money. She thats all.

Trump was just saying this below to get a rise out of the CNN reporter. He didnt really mean it. Watch the video. He is laughing. He anint serious.


"What happened with the woman — and I treated her very well — was she threatened to kill herself unless she had the abortion. I think she was unstable, probably was. I mean I don’t know for sure, but probably, and while I’ve always, always been against the taking of a life, I made the decision to give her the money because I was afraid she’d do herself in. Some women do. In fact I gave her way more than she needed, so she could relax and vacation or do whatever she wanted after the procedure. Was the baby mine? She says so. I doubt it but I decided not to contest it. That’s what kind of person I am. Unlike Bill Clinton and his dealings with women — and he treated them very badly — I was very nice to her. I’m always nice to women. A gentleman, really. I’m very proud of myself for that.”

Trump PAID for the abortion. But he didnt personally have it. So he is NOT guilty of an abortion. The woman is. Nor is he the father, even though he slept with her. She had hundreds of lovers from what I heard.