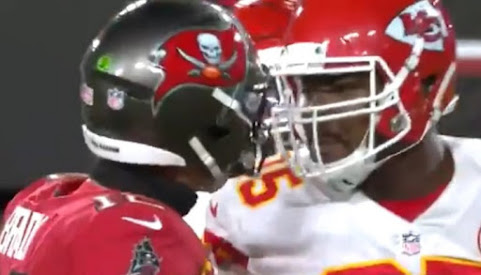 The Super Bowl champs hold off a Hall Of Famer at the end of his career in this game that was nearly a blowout but turned into a surprisingly heated exchange.

The Kansas City Chiefs were putting on a clinic early against the Tampa Bay Buccaneers on Sunday. Patrick Mahomes tossed a 44-yard touchdown pass to Tyreek Hill late in the first quarter to put the Chiefs up, 17-0. Hill ran around some would-be Tampa Bay tacklers and managed to score on the play, backflipping into the end zone as he did it.

The Kansas City Chiefs defensive lineman loves getting under Tom Brady's skin, as he did so on Sunday. Upon looking at the Week 12 NFL schedule, the most anticipated game of the slate was between the Tampa Bay Buccaneers and the defending Super Bowl champion Kansas City Chiefs.

The Kansas City Chiefs jumped out to a 17-0 lead in the first quarter en route to what ended up being a close 27-24 win over the Tampa Bay Buccaneers at Raymond James Stadium on Sunday.

The Kansas City Chiefs were clinging to a 27-24 lead, holding the ball on third-and-7 at midfield with less than 90 seconds left in the game. The Tampa Bay Buccaneers had no timeouts. Chiefs quarterback Patrick Mahomes shifted to his left, stepping up in the pocket to find wide receiver Tyreek Hill for a game-ending first down.

Patrick Mahomes and the Kansas City Chiefs are putting on a show against the Tampa Bay Buccaneers on Sunday night. Kansas City is leading Tampa Bay, 27-10, midway through the third quarter on Sunday evening. The Chiefs' offense has been unstoppable for most of the game.

There are very good reasons why Patrick Mahomes and Tyreek Hill are household names for the Kansas City Chiefs, and they showed off a few more on Sunday afternoon in Tampa Bay in the Chiefs 27-24 win over the Buccaneers.

Hill has 269 yards, 3 TDs in record day for Chiefs

7:41 PM ET Adam TeicherESPN Staff Writer Close Covered Chiefs for 20 seasons for Kansas City Star Joined ESPN in 2013 Even for a team that has showed some considerable firepower, what the Kansas City Chiefs did on Sunday in a 27-24 win over the Tampa Bay Buccaneers was extraordinary.

Defense looked weak against a 43-year-old has been.

Tyreek Hill is a great receiver, one of the top in the NFL. Mahomes,Jones, Hill, Kelce: if nobody else screws up too much, they can take the Chiefs all the way.

Football. Where huge rates of Covid are spreading. A dipshit girlfriend's photo shows why. Weird

Chiefs rule! 10-1 and head back to the SuperBowl baby! Kicking ass and taking names! Mahomes is the MVP again!

You got 30 minutes to drive to a Custard's Last Stand and yell Go Chiefs for 27% off your order.

What did they offer when number 27 use to abuse woman?
Maybe an ice pack for her eye.

And the former NFL fans YAWN!

Only in 2020 America would a Pregnant chick risk Corona exposure for sharing a cell. LOL

But she's a rich bitch.
They don't catch or spread shit like the little people.