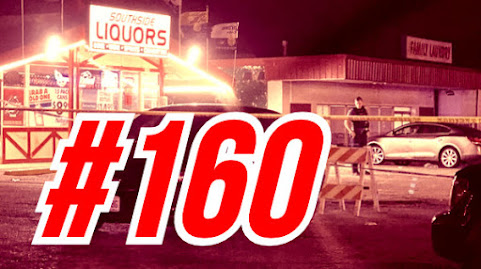 The Kansas City murder spike continues to push a historic homicide rate even higher as Winter draws near.

Again, this is the 160th homicide so far compared to only 129 last year.

"Officers and medical crews responded to a shooting call at 2:47 a.m. to the parking lot outside a liquor store next to the Rendezvous Lounge night club on Blue Ridge Boulevard just east of Interstate 49, according to the Kansas City Police Department.

"Crews transported a victim to the hospital with life-threatening injuries. That victim later died, police said.

Police said the incident originated at the night club, then went over into the liquor store parking lot, where the shooting happened."

Fox4: Detectives are interviewing witnesses at the club and processing the crime scene.

Most of your readers won't remember this TKC but this location was once a very nice neighborhood with families and good public schools. It wasn't that long ago, as late as the 80s people would live and work here and live in peace without it being a war zone.

Sad how it changed for the worse.

But I thought Biden was going to heal the country?

This place has had problesm before. If you don't wear a mask the city will shut you down but shooting up the place is no big deal I guess.

Look at it this way, during the next flood they can use the corpses to sandbag. For once, Q Ball is finally thinking ahead. 😏🙄🍿

I am soooo glad that that shithole is no longer my problem! I can sit back and laugh as it fails miserably. 😏🙄🍿

It was those Missouri Amish again...hope the Biden dream-team can take them on.


You really have to wonder about a place called Rendezvous. Can you guess what kind of people would frequent that place? The location speaks volumes too.


@9:19 Biden hasn't won the election. This election has now gone into the hands of the Supreme Court. So Jim Crow Joe and Kamala the black slave owner are only self proclaimed winners. No chicken dinner just yet.

^^and yet it will never go to the Supreme Court. Sorry, not sorry. Weird.

Seriously, getting wasted at a nightclub on a Monday morning. Don't these people have jobs?

The lead suspect right now is a man that goes by "White Privilege." He's 48 years old. Has two kids in college, a house mostly paid off, pays his taxes, no criminal record, minds his own business.

What is Biden going to do about the negro problem?

160 murders is respectable but not outstanding, even if it is our all time record. For example, Baltimore gas 286 murders and Chicago has 692. Even St Louis has 220, making Kansas City their bitch as usual.

Same old shit 10:07. Looking at the totals and not the demos. Believe what you want and keep living in that fantasy world.

and yet, nobody really cares. Weird.

And nobody caring is why the bodies will continue to pile up.

I didn’t realize St Louis had so many more murders than Kansas City. The way everyone talks, I just thought we had the worst murder problem in the country. We’re not even number 1 in Missouri, even though our population is higher than St Louis. I never knew our hood rats were weak punk-ass bitches.

"You really have to wonder about a place called Rendezvous." It's one of the best BBQ places in Memphis.