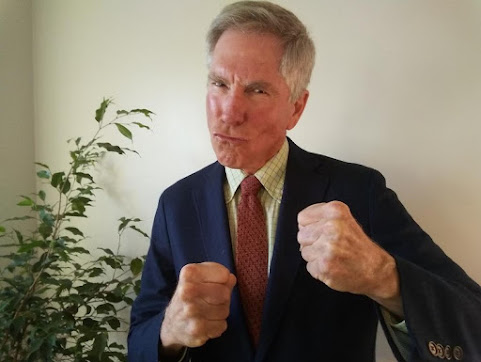 Clay Chastain has been fighting city hall for more than a generation. During his struggle he has helped to make a great deal of progress for this town and he's one of the few voices who continually advocates for direct democracy and voter participation over social justice protest.

Here's a worthwhile preview of is court fight . . .

The plight of one such KC petition, ignored by City Hall and suffering a MSM news black out, has finally made its arduous way to the United States District Court and the Honorable Judge Roseann A. Ketchmark. And it will be a battle between................... those controlling vs. those controlled; the lowly vs. the lofty; the arrogant vs. the meek.

600 days ago, nearly 3,000 KC registered voters submitted a formal written request to the City mandating an election be held to decide a particular cause. For 600 days the controllers, abetted by MSM, have ignored their petition and muffled their voices. In America we have seen the enemy, and it is not us. It is our controllers.

We pray this Honorable Judge will give life, voice and strength to the people's full, democratic and unobstructed right to petition their "government for a redress of grievances".

If he uses that holier-than-thou argument we can expect a first round knockout here.

KC where "don't do this without a vote" means full-speed ahead no vote.

^^ And tax increases to cover the "oversights"

Clay's "petition drives" started decades ago and not a single one of them ever amounted to squat.
Aren't there some statues in Virginia he can get all upset about?
Or a governor who appeared in blackface?
Just please go away and take Jason Pander and Stacy Shaw with you.
And Sly. That's about as close as he'll ever get to DC.
Actually, there are a lot of other usual suspects, so you'll need a bus.
Quite a few buses.

I'm all for raising your taxes through the roof Millie. Pony up buttercup! 😏🍿

^^and yet you don't live here, you have zero voice in the matter, and unlike you, I can afford to pay more. Pussy bitch. Super weird.

I could pay more. I chose not to. There is a limit and it was reached. You have fun with that Millie.

P.S. You make sure and cough up them property taxes by December 31 ya hear? Enjoy paying all the other nonsense taxes too and go ride that toy choo choo. There's no wait and it's free!
😏🍿

^^I always do. They're never a problem. Taxes are the price you pay to live in America. It does no good to cry like a bitch about them. Maybe if you wouldn't have spent all your money on opioids, you could afford to pay them?

Go away Clay,
you've had your day,
You picked the wrong side,
now you have to pay.

Clay, please shut the fuck up.

What do you care, Dumbit, you don't even live here, or so you say.

You need to start your own blog bandit. I suspect folks now just go right by the dumb bird, hoping to find something interesting. I know I do, and I am pretty sure I haven't missed a thing.

no one cares about yer bs petition, go home carpetbagger