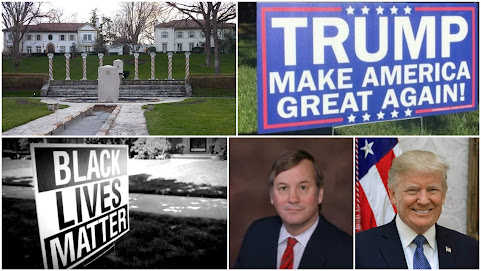 We've had a few notes sent our way on an alleged act of political violence in a swanky suburban enclave of Kansas City.

For a full description of the story, check the only local outlet that has reported the attack . . . The Sentinel took a quick break from denying local coronavirus numbers to reach out and provide a detailed accounting of the story . . .

Most readers decry the violence whilst a few express skepticism.

Many important insights from a Kansas political insider and former JoCo elected official . . .

"Sutherland is not a kook, he is a very educated reasonable conservative thinker. What needs to be highlighted here is the failure to prosecute--preposterous, they know the perp! East Joco is now strongly purple. All kinds of BLM signs . . . This is not the Mission Hills of old."

"TKC, think about this the other way around . . . What if a Trump supporter assaulted someone over a BLM sign, CNN, MSNBC and ABC news would all highlight the issue for a week. Local news didn't even cover it."

"I'll tell you why nobody covered it, he's a former Republican operative and what he is describing is losing a fight not an assault. On your blog a lot of people express skepticism when a person of color reports an attack by police or a hate crime. I think this ALLEGED claim of political violence needs to be  met with the same kind of cynicism."

The debate continues as the election moves closer . . . We do know for a fact that Mr. Sutherland was hospitalized and we wish him a speedy recovery and hope the threat of more political violence will subside as we approach the election.

There was also an assault in the Northland. I hope this is not a trend in the kc metro. It could end badly if someone picks on the wrong person and the fight escalates.

Already it has come to the time when a cautious person would be wise to go outside armed. Even the threat of a shot through the windshield might have been enough to scare away the car assault guy.

Why is PVPD dragging their feet on this issue? Stealing signs is one thing trying to run over people or hurting when trying to do so is unacceptable behavior and against the law. PVPD and the city as a whole is ran by a bunch of liberal assholes who like Lucas are ruining it all.

Prairie Village has a screw ball attorney like Kansas City does for a Mayor and both love the democratic lifestyle.

Sutherland is an okay guy and sure does not deserve to be treated like this.

"what he is describing is losing a fight not an assault".. WTF?? some douche trying to run him over with a car?!!..even Mike Tyson would lose that fight..

^^^^And yet his story sounds suspiciously like Tawana Brawley in whiteface. Weird.

This is why I have said the pundits are WRONG again, all those yards in Hyde park and other liberal stronghold neighborhoods WITHOUT signs are likely TRUMP voters and just have enough sense NOT to put a sign outside, but we vote and will once again vote TRUMP!

Hey weird guy...he must have really overcooked it to have to be transported to the hospital?? Weird douche weird. Weird


Maybe do a black face and then report the crime. You can't lose with that.
So funny though how the PINKO liberals are still so butt hurt that they have gone to extremes over a sign. I see it all over the suburbs they have even taken a knife to cut out Trump's name, and used cheap spray paint that doesn't do anything. It's really a good laugh. They are exactly like the character Michael Myers with no conscience and they have no clue about what is going on in the world . So go ahead and vote for your democrats and tear up Trump signs you are voting for no jobs high taxes and non citizens who get your money for nothing, and don't forget local rioters. Democrats the dumbest people in the world, just check out the new laws in Virginia if you want to see stupid.

Yep, the Dems in my neighborhood flaunt their signs. They are insecure and have to make sure people know who they are voting for and we laugh.Those without signs are Trump voters who prefer not to have the hateful Libs do vandalism. I can tell you my tolerance for the Lib protesting is at the end. I bought a gun. And, I know I speak for many, plan on using it if need be.

Good he wasn't hurt or killed, but people need to know that a large and growing group of people are sick and tired of this trump/republican party mess. White people have lost their minds and all self respect for continuing to support this mess. People are sick of it.

Pussy MAGAT starts a fight and it ends badly for himself. Thoughts and prayers, idiot. Lots of ‘em. That’ll teach to fuck with Democrats.

Elderly couple in Seattle had 9 bullets shot through their house for hanging a Blue Lives matter flag outside their house. Drive-by for displaying a flag.

10:47: And yet Tawana Brawley was rushed to the hospital as well. Weird?

Most of the BLM signs you see around town and in PV are people who want to try and ward off damage to their property. They think if they put up a BLM sign, they won’t be attacked. Most people are fed up with the BS. If intelligent people read the BLM platform, they wouldn’t support it.

11:15a ... war? Nope. You and your fanatic MAGAT scum bring terrorism. You are a COWARD hiding behind a keyboard in your country bumpkin trailer. Pussy. Assed. Coward.

A lot of self righteous limousine liberal Karen and Chads in that area along with uppity gays. They are voting for a Chinese sock puppet for reason thay cannot explain.

NO ME GION IN THE KC STAR A OUT THE JOE AND HUNTER BIDEN SCANDAL.

The past employees should speak out on this and force the KANSAS CITY ATAR to cover a National Tragedy.

Fuck the Star and their Liberal pro quid Joe coverage.

Yet there was an actual assault. Next time you are assaulted we can debate if it actually happened and we’ll let you know what we decide. Very weird.

Dark web saying Republicans plan to impeach and remove and jail both Bidens if Joe is elected.

Since it’s tantamount to treason the death penalty could apply.

Movement needed to defund the star.

Any ideas? They seem to be doing a good job themselves of self-defunding... just not fast enough.

Tony- start a thread on ideas of how to defund the star... please.

When Biden signs were stolen in Brookside, KSHB 41 did a very supportive story about it. Yet, when Trump signs are stolen
there are crickets from the mainstream local media. Just one
more example that the rampant media bias is also local and
media people are fake journalists.

His story is so touching, but it sounds just like a lie.

would a black person feel comfortable taking a walk, or jog, or riding a bike , or driving a 2005 chevrolet through mission hills because of the BLM signs?

VERY TRUE. SAME In brookside. Houses with no signs are Trump. And that's the majority. Ive been taking these libtards on. At the plaza and Westport. I ask them if they want to Box
They backdoor quit. STAND UP TO THESE LOSER DEMS.

even if a majority of houses in mission hills had BLM signs, would a black person feel comfortable taking a walk, or jog, or riding a bike, or driving a 2005 chevrolet through mission hills?

Hopefully the KC Star goes bankrupt and the despicable yellow journalists will lose their pensions and have to work at McDonalds or Wal-Mart at age 79.

I've know my whole life media was fake. Brainwash tool. Now there exposed. After Trump wins media will never be believed or respected again.
THIS IS GOOD.

And yet this plays like Jussie Smollett in whiteface. Weird.

Ask a citizen lf China if they watch the news. Most will say no, because it is propaganda.

I will dance in the street when the liberal and Biased KC star goes belly up, I hope it’s soon!!!!!

I have an aunt, a white lady, and whenver we happen to drive through a black neighborhood whether that be in Baltimore or st louis, she always tells me to stop at a gas station, so she can go in and get a pepsi. While i wait in the car and get stink eye. lol.

last time i was in st louis there were black folks milling all through the instersections near highways, walking up from the back of your car, to see if you'd roll your window up. I favorite question of black people in black neighborhoods "are you lost?"

Trump has been accused of rape by a Ny magazine editor and she just got the court's approval to demand Trump's dna. So if he raped her - will people still support him?

as soon as you said that i wondered if the 'evidence' was on a dress.
Indeed it is.

which technically does not prove anything except someone may have saved a dress for 30 years that trump left evidence on.

These Antifa and B.L.M.Supporters can't think for a themselves. They watch the C.N.N. N.B.C.CABLE WITH MADDOW .AND BELIEVE EVERY WORD .The Reason Trump is Popular the People with Wisdom Research and The Canedate and His Opponent.But they use independent news outlets not the Main stream media .YOU can go back Fifty years on Biden, and the Corruption. Who will you vote for the career politicians .

Those results show that four or more people, at least one of whom was male, contributed to the DNA found on the sleeves. So was she raped by all. What kind of DNA was it of the four?

“After Trump sexually assaulted me, I took the black dress I had been wearing and hung it in my closet,” E. Jean Carroll said in a statement this morning. “I only wore it once since then and that was at the photoshoot for the New York Magazine article about my book.”

So she kept a dress for say 25 years now says I was raped by Trump come election time. This is all bullshit and how do we know the DNA wasn't planted from something else?

That's the trouble with civil cases it can all be hearsay shit.

True. It sounds kinda like the alleged victim of the "beatdown" in Mission Hills, amirite?

Yet a person can have a BLM terrorist organization sign in their yard and be held higher than God. A god or even their communist heroes like Mao , Hilter and Stalin, which they are more aligned to than caring for people like they pretend. Weird.

Anyone who thinks PV police wouldn't jump to prosecute an assault in Mission Hills if there was credible evidence of one is off their rocker. Mission Hills pays a lot for police coverage for their mansions. This whole story smells fishy