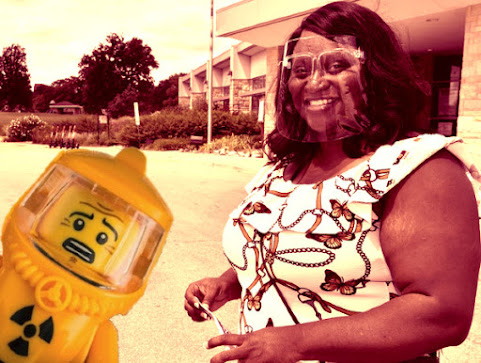 Here's a bit of EXCLUSIVE newsie behind the scenes that delights the fashion sensibilities of our blog community.

First and foremost, despite some dust-ups with police Ms. Canady is an extremely nice person who earned conservative praise for helping voters organize "Save The Paseo" petitions from her office.

During the course of the campaign she has mended fences with former political opposition and just about everyone who talks to her knows that she has a charming and soft-spoken manner that speaks of a great deal of empathy for a politico who is obviously very smart, has earned multiple post-grad degrees and is a rising star local lawyer.

Still . . . And given that everybody is is frustrated with public muzzling that is mandated.

Sure, it's not as cool as Coach Reid's face shield but PPE is never really fashionable.

Actually, we're glad to see that Ms. Canady is keeping safe on the campaign trail given that a great many urban core denizens feel like the Missouri Democratic Party strategy was a ruse and the efforts of the former council lady might be in vain. The suspicion: Party leaders packed the down ballot with people of color but then betrayed them all by focusing all of their efforts and cash on pushing the mouse-y Missouri Auditor Nicole Galloway on voters.

The point here is that the face mask is kind of silly and Missouri Democrats know it . . . Very much like Midwest progressives putting all their hope (and money) in a candidate for Guv who is mostly too scared to talk trash along with everybody else during campaign season 2020.

P.S. - The TKC challenge to readers tonight is to clown this silly mask WITHOUT being racist jerks or misogynistic given that Ms. Canady really is a nice person and should have a great future in Kansas City politics if/when she ever realizes how badly the cynical Missouri Democrats have hung her out to dry for the benefit of a white lady politico who has faded horribly in the midst of this campaign wherein the super-minority party actually had a great shot to make progress.

Either commit to being a jerk OR don't. The compliment sandwich trick is easy to spot.

There is nothing ridiculous about face masks and PPE.

Yet it still made me chuckle. Weird.

These shields don't block the virus from coming in under and around the shield. Not good.

I like it.
You can see her pretty face and smile.
However, 7:11 is right. It is not much protection from germs.

It might protect her from germs but it sure as fuck didn’t protect her from calories. Alissia is very fat. I wonder if she has current registration on her car. My God that is one fat woman. I bet she can put a lot of chicken away.

Remember any deficiencies of (other than N95) a mask or shield can harm others. It's only purpose is to keep virus molecules from issuing out to others. Not for personal protection.
I thought everyone understood that by now.

So if one disrespectful person wears a deficient mask or wears it improperly they are a risk to all others around them.

AND if your nose is exposed, virus cells in the nasal cavity can easily spread the virus just by breathing alone same would be through the lungs, throat and mouth.

At the store I see some folks take their masks off after the check points then put them back on at checkout. Or they later expose the nose. This just shows either ignorance or reckless disregard. If you're not going to wear a mask, don't be a chicken shit, own it.

For the short time that a person is in a store, whether believing in wearing a mask or not, please for the respect of your fellow human wear the mask properly in the off chance that it just might save lives and suffering.

Alyssa is a pretty woman with nice curves.

I don't need current tags no kinda way! Don't you know who I is?

That shit is a face only a mother could love! 🙄

She says it's an anti-eating shield to help lose weight. It's put on with a padlocked strap that only Oprah knows the combination to.

She’s got same hams for arms, my god they’re huge!

Masks are security theater. Fauci said so in March. It's a feel good measure. Plus, that woman is not running for anything except meals. In fact, it looks like she has never run in her life. She needs to contact Nicole Galloway and get some good, weasel-face dieting tips.

She could try out a welder's mask for greater protection.

After I pointed out that Canady was in favor of banning no-knock warrants, banning chokeholds, and mandating deadly force be used only as a last resort by police, while simultaneously supporting liberal abortion laws, the shit hit the fan!!!