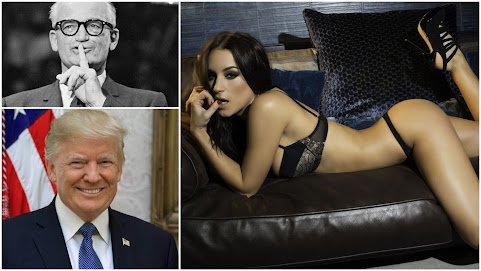 Slide onto TKC's couch and let's talk a bit . . . Among the many city college video game sessions adventures of TKC, our pre-med third choice university life included a bit study into the mysteries of the human mind . . . Also, a talented academic like TKC understood that sometimes psych classes count as a science credit and they were far more fun.

Accordingly and for a final #TBT post, we sent a note to an old school professor and he graciously offered this hot take in order to start our discussion.

"Glad to see that you still remember the 'Goldwater Rule' . . . All of these amateurs attempting a diagnose people they've never seen are behaving unethically. I may not agree with President Trump but it's not the place of the media or anyone but a licenced professional to speculate on the clinical details of his mental state."

For the uninitiated, here's why everybody playing psychiatrist or doctor on TV is mostly out of line:

"The guideline adopted by the APA after a 1964 survey of psychiatrists found that nearly half of those polled felt that GOP presidential candidate Barry Goldwater was psychologically unfit to be president.

"The rule states — A professional code holds that if they haven't performed an in-person evaluation, psychiatrists should keep quiet on the mental character of public figures."

And so, tonight we share these news items as the nation conducts a mostly unethical head check whilst the American politics literally goes crazy . . . Checkit:

Democrats in the US Congress have announced a plan to create a commission to review whether Donald Trump is capable of carrying out his presidential duties or should face removal from office.


Out Of Left Field

Republicans were baffled by House Speaker Nancy Pelosi's Thursday suggestion that she might introduce a bill allowing a body appointed by Congress to invoke the 25th Amendment to remove President Trump from office as he recovers from the novel coronavirus.

The 25th Amendment Won't Save Us From a Roided-Out Trump

When the president's COVID-19 diagnosis was acknowledged, there was naturally a lot of interest in what would happen if he were to become so ill that he was incapacitated to do his job, even temporarily. At the time I wrote about the three incidents in which two presidents (Ronald Reagan and George W.

Trump responds to Pelosi bringing up 25th Amendment: 'Crazy Nancy is the one who should be under observation'

The Doomsday Plan: How the Military Responds When the President Can't Fulfill His Duties

As word of President Trump's COVID-19 diagnosis first spread on Thursday night, an amateur plane spotter in Hawaii noticed online what he thought were two suspicious flights: Navy planes, known as E-6B Mercurys, aloft on both the East coast and the West coast. The E-6Bs are unique in the U.S.

As always, we remind our blog community to enjoy the show and don’t take any of this stuff too seriously given that our po’dunk cowtown can’t really change any of it.

I think people can weigh in, just not as experts. I don't think they're making a formal diagnosis. But it's certainly not unethical to say a politician is acting crazy, that's more of a political opinion which is constitutional.

MAGAT MELTDOWN! 26 days until America votes him out and locks him up! Holy SHIT this is gonna be fun. The Blue Wave is gonna sweep all of Congress and the White House. Once the traitorous MAGATS rebel and take to the streets with guns, the rest of America will plop down in front of the TV, turn to any number of reputable stations, and watch Federal troops mow these fuckheads down like weeds. It’ll be the best massacre since Bowling Green. Praise Jesus!

Goldwater wanted to use nukes in Nam. I think we should spare our soldiers and use the most potent weapons - but only for a meaningful conflict. Nam was a waste - you can go there now and the North V.C. that were killing us are now gladly acting as hosts for us at their businesses. Had we not gotten involved it would have been a peaceful transition to the capitalistic country it is now.

TKC, college professor conversations are fun but I don't think they're EXCLUSIVE.

Still, I get it. The state of the media is so sad that nobody thinks about ethics any longer. Thanks for trying at least!

It is sickening the way that white people continue their cowardly acceptance of this old crazy white man trump. People are so willing to make what white leaders do in this time ok, when they harassed Obama for his entire terms simply because he's black. I hope that people repent and turn from their sinful ways.

Suicide is Trump's response when he loses. There is no other option for him. If he lives its 35 years on tax evasion and his family goes too. Its much bigger than Maddoff scam


Pelosi is a nut job.

Reminds me of the Driving Miss Daisy character losing her marbles but still thinks she is in control.

Trump not using a rubber on Stormy Daniels proves he is mentally unstable.

^^^ your obsession with rubbers is 25th amendment material

His obsession with stormy Daniels is 25th amendment material

His TDS is 25th amendment material

His obsession with maggots is mental ward material

Does the mental midget at 9:53 like anything about life or is he always this suicidal?

So now we understand what the Professor says about amateurs (to whom the "Goldwater Rule" doesn't apply), but what does he have to say about the large number of Professionals who point to the symptomatic behaviors that indicate psychological disturbances?

They aren't making diagnoses, just highlighting the obvious dangers and probable causes of such aberrant behavior.

Biden should probably play a variation of Clint Eastwood's ploy, put an Orange Halloween Wig on a hat stand and "debate an Empty Hair"!

The Democrats are very nervous about something. There covering up something hugh. This is there last desperation attempt. Something hugh is going down on Democrats.

Hope
U
Get
Help

LOCK HIM OUT! VOTE HIM OUT! LOCK HIM UP!

9:48 nobody harassed obummer, he’s a protected species of ape and that’s verbotten so.....

Oh, Chimpy, you know Creepy Biden would only sniff and grope it all evening, while saying: "Go ahead, kids. Rub my leg!" And, "Do you like blond hairs?" "Well, do ya,kids?"

Did Mexico pay for the wall, yet?

The Democrats and the Deep State have to get Trump out There corruption has been exposed.Look the Obama and Joe Biden administration was Corrupt and there are many witnesses. With the Democrats in.They won't go to Prison.Susan Rice Hillary for buying the Fake Dossier from Russia. Obama for letting Hillary go along with the Coup. Brennan Comey .

Stephanie & Stephan don't wear bras or panties and don't like anything around their necks.

You just won't accept stephanie or Stephan because of your past.

do you study psychology?

I am a military man.

I don't fucking understand you.
You won't accept me because of ya past.

I don't fucking understand you.
I am a felon.

the military is running better than the trump adm

Check?
3rd in line for the nukes- Crazy Nancy says she was set up by her Hairdresser.
Let that sink in.

We pray for Nancy’s hatred for the poor. May her soul find repose is Hades along with the media.

Perhaps one of the best monikers ever created and spot on!


Biden’s malfunctionin’ noggin
Is covered with terrifyin’ hair-pluggin’
As his mind is glidin’
Into the dark horizon
And shouldn’t be presidin’.

I voted for Obama, but now the Democrats have become the party of lies, lawlessness, abortion (even after the baby is born), violence destroying once great American cities, high taxes on our paychecks, weak military, open borders, free healthcare for illegal aliens at taxpayer expense, defunding the police, sanctuary cities, sending millions of taxpayer dollars to Iranian radical leaders, and more idiotic ideas. No thanks.

If no one has noticed, the Dems are playing the game of "Create Bogus News Event Every Day" until the election is over. It takes the coverage off of Blunderin' Biden and Harris, his putrid running mate, and all the answers they won't give to the questions Americans want answered, such as will they pack the Supreme Court. It also takes coverage away from the increasing evidence that the Obama-Biden administration spied on the Trump administration and tried to remove a duly-elected president with lies and false accusations.

The Democrapic party has never stooped lower than it has now. They did it the day after Harris' terrible debate performance with talk by Pelosi of invoking the 25th Amendment and the debate organizers quickly announcing the next presidential debate would go virtual. The debate organizers are all Democraps or RINOs (Republicans In Name Only). The next debate moderator used to work for Biden. How dumb is that?

The military "got rid" of JFK. The military wont put up with politicians they do not like.

Chuck Norris doesn't get on Fox News and rant like a lunatic like Trump did on Thursday.

Trump on Thursday: “They found very little infection or virus, if any. I don’t know if they found any. I didn’t go into it greatly with the doctors.”

That’s totally normal. Who would “go into it greatly” with doctors after getting infected with a deadly virus?

Your candidate is a candidate for the Laughing Academy.