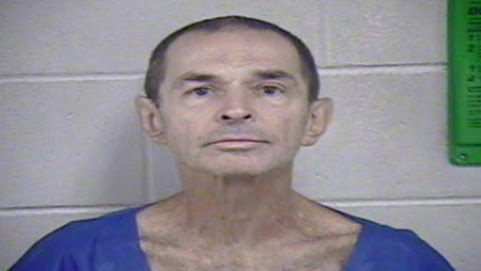 There is A LOT of backstory here because this dude was a longtime creeper who earned rebuke from ladies across the metro. His victims have accused him of far worse deeds but we've highlighted the sketchy escapade that finally put him behind bars in a press release that chronicles the federal case against him.

“This armed and dangerous criminal, with a history of stalking and violence toward women, will spend the rest of his life in prison,” said U.S. Attorney Tim Garrison.

Robert J. Gross, 69, was sentenced by U.S. District Judge Gary A. Fenner to 35 years in federal prison without parole.

On May 15, 2019, Gross was found guilty at trial of two counts of stalking victims across state lines, three counts of being a felon in possession of a firearm, and three counts of receiving a firearm while under indictment.

Gross was under investigation in 2017 for destroying property and harassing and stalking four women associated with massage parlors in Kansas, which led to him being placed under surveillance by law enforcement. While under surveillance in December 2017, Gross purchased handcuffs and other items from a surplus store, visited a gun show twice, and purchased two shotguns from a private seller advertising on the internet.

In October 2017, Gross visited the Tea Spa Massage in Lawrence, Kan., where he was asked to leave by the employee. Gross took all of his clothes off and walked around the business completely naked, harassing and threatening the employee. The video and audio surveillance show Gross grabbing and groping the employee, who eventually fled the store and flagged down a passing man for assistance in getting Gross out of the business. Gross got dressed and left the business.

Law enforcement investigators began surveillance of Gross after these incidents.

On Dec. 2, 2017, officers saw Gross purchase four sets of handcuffs, two black shirts with “SECURITY” written on them with badges on the front, and two balaclavas (a garment used to conceal facial identity) from a surplus store in Kansas City, Kan. The manager of the business told investigators that Gross had purchased two sets of handcuffs the week before.

On Dec. 16, 2017, officers saw Gross inquiring about the purchase of firearms at the Kansas City Gun Show located at the KCI Expo Center. Gross picked up and handled a 9mm Velocity “Uzi”-type firearm with an empty 30-round magazine at one of the booths. The dealer at the booth told investigators that Gross, who approached his booth multiple times throughout the day, had asked about purchasing up to three firearms. The next day, Gross visited the gun show again and was seen inquiring about the purchase of firearms. Gross visited a different booth, where he picked up a Smith and Wesson 9mm handgun.

At that time, Gross was a convicted felon and also under indictment in the state of Kansas for aggravated sexual battery. Under federal law, it is illegal for anyone who has been convicted of a felony, or who is under indictment, to be in possession of any firearm or ammunition. Gross has prior federal felony convictions for possession with intent to distribute cocaine and interstate transfer of a stolen firearm. He also has prior state felony convictions for making terroristic threats and burglary. The state convictions in Kansas stem from breaking into the house of a former girlfriend and stealing a .380-caliber firearm. He threatened to rape and torture the former girlfriend and her sister, to cut off her sister’s head and leave it on her bed, and to burn down her house.

On Dec. 22, 2017, Gross returned to the surplus store in Kansas City, Kan., and was observed purchasing four more sets of handcuffs and a balaclava. Gross also asked about purchasing a bulletproof vest.

On Dec. 22, 2017, officers observed Gross purchase two shotguns from an individual in the parking lot of the Lowe’s Home Improvement store in Liberty, Missouri. Gross first drove to the Pizza Ranch parking lot, where he removed the license plate from the front of his car. The rear license plate had been removed as well. Then Gross drove to the nearby Lowe’s store, where he was met by an individual driving a white pickup truck. The unidentified individual sold Gross two shotguns, which he handed to Gross from his truck. As Gross was putting two shotguns in the trunk of his car, officers arrested him for being a felon in possession of firearms.

The individual who sold the shotguns to Gross told investigators that Gross called him the day before, after seeing the Savage 12-gauge shotgun and Winchester 12-gauge shotgun advertised for sale on a website. Gross told him he wanted to buy the two shotguns for $350 and they arranged to meet at Lowe’s to conduct the sale.

Sorry. Looks like you lost a reader here T.

If he was black, his picture wouldn’t be shown.

I went to school with this dude, didn't ever speak to him, or, know him well. Actually, he was extremely smart, maybe genius level, but so, so, so fuckin crazy.

Out in Ruskin, he booby trapped his house with C-4 and throughout his life (I will try to remember all of the stuff I heard-) was supposed to have raped and murdered on an ongoing basis.

Bad, bad dude that should have been executed many, many decades ago.

Look at Him, Straight Ticket GOP Voter if I ever saw one.
Bet he drives a Ford F-150 with a "Don't Tread On Me" sticker.
Who the hell does he think he is, the President?
Of course, he has now shown he is fully qualified to for a career as either a Republican Member of Congress or as a Televangelist.

Bethca he votes Demonrat at least a half dozen times! Any takers?

My my, weren't they watching that nasty man closely? Tip to Gross: Tape a tube of lube to your lower back before walking around in prison. No need to thank me.