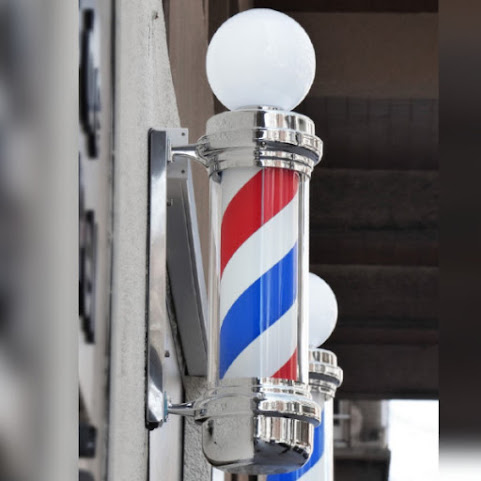 Here's a glimpse at local campaign move that speaks to an longstanding community institution.

We're skeptical of most campaign news but this inclusion of an old school community forum offers a worthwhile political throwback . . .

"6 barbershop owners from the urban core have signed a joint press release to demand AND host a debate between Mr. Emanuel Cleaver and Ryan Derks. I GLADLY ACCEPT. Your move, EC."

A barbershop debate would make for great entertainment but here's a more accurate view of the contest given that ONLY THE HOPELESSLY NAIVE REFUSE TO UNDERSTAND THAT AMERICAN ELECTIONS ARE DECIDED BY MONEY . . .

According to the last campaign report, Congressman Cleaver had $782,882 on hand whilst upstart contender reported around $4,338 cash in his campaign coffers.

He also burns houses down!

^^and what you just did is libel. Anonymous coward.

^^2:03 got all of his legal expertise on the internet.
He read one stupid story that used the word "libel" and he thought it sounded fun to repeat it.

ABSOLUTELY ANYBODY BUT CLEAVER!!!!!

^^and yet you love him as you always post about him. He owns you. Weird.

^^^While it's Lucas whose dick you suck daily.

Answer to your name some more slave!! Lol.

Even if the money was reversed, the white person loses, kc hates white people.

If this guy really wanted to beat CLEAVER HE CAN. HE CAN HAVE THE VOTES. CLEAVERS,BUDD OBAMA WAS ONE OF THE MOST CORRUPT PRESIDENTS IN HISTORY. AND they are under investigation as I Type.Cleaver went along with the Russian HOAX When the OBAMA ADMINISTRATION WAS THE ONES Dealing with the Russians. The Democratic party is the party of Abortions never ending Middle East wars.HIGHER TAXES AND HE DIVIDES THE COUNTRY .THERE SOME REPUBLICAN,PACK MONEY OUT THERE. IF YOU WANT TO WIN. GO to Central and Eastern Jackson County there are your votes .and Many in Southwest Jackson County. The hoods destroyed there businesses .YOU HAVE THE VOTES GO GET THEM.

Note :Remember The Democrats are the Abortion Party and never ending wars. And Cleaver is a Preacher. He is a Phony. You can win if you bring up this issue .

3:10 and yet you love him and always respond to him. He owns you. Now go suck his dick. Not weird for you!

wouldn't it be funny if we find out that Dereks torched his family home himself or had one of his good ole boy buddy torch it in order to try to suggest the cleaver had something to do with it. You know white folks if you can't win fair, cheat!

Won’t it be funny when the fake revrun cleaver goes to jail for his involvement in burning down this house! You know koloreds folks if you can’t win fair, cheat, burn and murder so..... do you remember when he broke the glass at his office in independence and he blamed whitey for that? Turns out it wasn’t whitey but one of his goons to stir up the race card for votes. Cleaver is known for this crap.

And we’re still waiting for a response from cleaver

Did somebody say black barbershop?
You're getting warmer, but my issue is black women's hair.

Let me tell you about HAIR DISCRIMINATION!