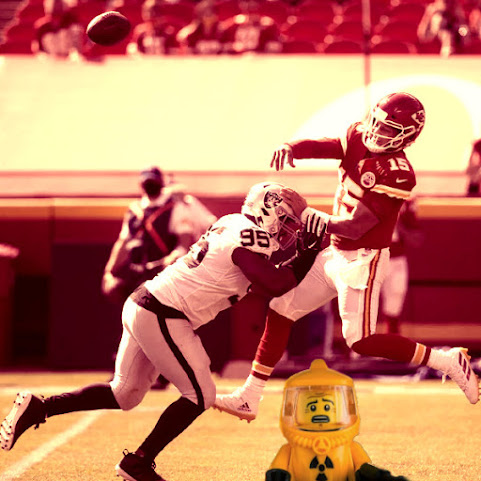 Local dreams of a sports dynasty are quickly starting to fade as NFL opposition discovers that consistent pressure on QB Patrick Mahomes is the key to defeating The Kansas City Chiefs.

It's not really rocket science and the persistent myth of invisibility is something that fanboys in politics & pro-sports can never seem to understand.

Accordingly, check a few links worth consideration as locals attempt to spin the defeat, losers complain about the refs and the 2020 season might FINALLY be getting interesting . . .

What began as a balanced offensive shootout quickly turned into a shocking and sloppy loss for the Kansas City Chiefs. Derek Carr and the visiting Las Vegas Raiders outplayed the Chiefs in every way in a surprising Week 5 win by a final of 40-32.

KANSAS CITY, Mo. - Derek Carr threw for 347 yards and three touchdowns, outplaying Super Bowl MVP Patrick Mahomes along the way, and the Las Vegas Raiders nearly shut out the potent Kansas City offense in the second half to rally for a 40-32 victory Sunday that ended the Chiefs' franchise-record 13-game winning streak.

Chiefs' loss to Raiders a reminder of 2018 season

The talk out of Las Vegas all week was that for the Kansas City Chiefs to be a true rival, the Raiders had to win. They backed up their words Sunday at Arrowhead Stadium, defeating the Chiefs 40-32 to deal them their first loss of the 2020 season - and their first loss, period, since November 10, 2019.

KANSAS CITY, Mo. - Coach Jon Gruden earned his signature victory Sunday since returning to the Raiders three years ago, and Las Vegas shocked the defending Super Bowl champion Kansas City Chiefs 40-32. The victory also is a potential seminal moment for Raiders quarterback Derek Carr, who has been criticized for not being able to take the team to the next level.

Good they got it out of the way early. The rematch will be a bitch!

Good! Get used to losing people.

About time!Nice to see somebody in the NFL has a pair!
Clark Hunt, CEO and Owner of the Kansas City Chiefs

Mr. Hunt called a meeting with all of his Coaches, Players and field staff and firmly told them,

"You are all simply paid performers on a stage and that field is my stage!

You will stand, with your hand over your heart and with respect, when our Country's National Anthem is being played or you will no longer be a Kansas City Chief, a Coach for the Kansas City Chiefs or have any association with the Chiefs Organization!

I will immediately fire you, no matter who you are!" You can make your political statements off the field, but when you're employed by me and I'm signing your check, I demand that you make our fans proud and not embarrass them."

Nice attempt at fanboy PR 4:30 but it never happened. Weird.

Yeah, season's over all right.

Chief’s players have more BLM bullshit on their helmets than any other team in the league. This is a
reflection of the ownership and head coach. Not the first game this overpaid imbeciles have looked bad. They’re lucky not to have 2 losses. Less BLM and more of that playing football stuff.

The Chiefs lost! Boo hoo! Whatever shall we do? Of all the city’s problems now, this is definitely the worst.

Tony has to be on Cloud 9. His Dodgers are in the NLCS and his Raiders finally beat KC.

The raiders have been drafting high draft picks for years. It’s about time they actually looked like an NFL team
The chiefs for some reason, can score a lot but have it called back on penalties

I try to leave my personal bias out of the coverage (or at least make it funny) but there's no denying that you made me laugh. Nice.

The Raiders just shut down the #1 offense in the NFL. They had Mahomes running his butt off. without Mahomes the Chiefs have the same mediocre players that kept them waiting 50 years for a Super Bowl win. On the contrary, an unhealthy Raiders team just beat the stuffing outta the Chiefs. At Arrowhead. Are the Chiefs capable of living up to the "hype"? We'll find out. Go Raiders!

No surprises here, it's just that the Chiefs are showing "what they're made of" a bit earlier in the season.


I hate the NFL but I'm glad the chiefs got beat. What happened to the little hero boy Pat Pompadour Mahomes??? HA HA HA HA

Dream on. That’s what he should do but lacks the backbone to do it.

@5:38-I think I saw him fucking your daughter in the ass. He told me to ask you if you were jealous because your wife is dead. Ha Ha ha ha ha

6:14 is a real sicko degenerate!!! ( you might have to google that asshole)

^^And yet your daughter let’s him fuck her in her ass. Sounds like she’s the degenerate whore.

Hope I can catch at least one NFL game before it implodes.

I hope you can change your shitty diaper before then too!

Father @5:36 I agree with you about basketball. Are you saying that about National Felons League also?

Patty Mahomes will never win another Superbowl. Mark my words.

They are lucky they don't have 3 losses. I'm glad to see these overpaid imbeciles lose. More losses to come, I guarantee it. No more Superbowls for you Patty Cakes.

^^Thought you weren’t watching CHUD? You geriatric fucktards are such liars. Chiefs still the best team in football by a mile. Weird.

And yet the Chiefs are still the best team in football and will the SuperBowl easily. I guarantee it. Weird.

Chiefs fans of prior years were worth 2 touchdowns. Fans aren’t there and may not return. We’ll see how good they really are but, in my opinion, they should have 2 losses.

Really. Bet it matter much more than yours. You’re upset because you know it’s true. Pandemic, my ass, you’re a pussy and a shit bag. Fuck yourself loser.

Get some new offensive linemen and this team will be fine. That's the most glaring weakness. Can't protect Mahomes and can't run-block most of the time. It's a good wake-up call for the Chiefs to get better linemen.

We can rebuild him, we can make him better than before.

What I want to know is if Chief’s management took the fans out of the game? Were they allowed to dress up, hoop and holler, and chop or was security keeping the fan enthusiasm tamped down? If they were, they got the loss they deserved.

8:15 yes sir, the O line was giving Patrick no time at all. when he created his own pocket by a scramble he was making completions.

And we have to figure out how to tackle better.

but raiders aren't chumps any more, that much is clear.