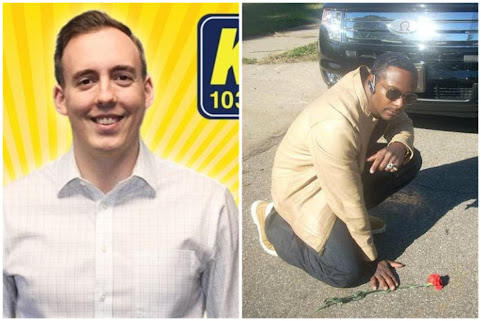 There are fewer opportunities for the people of Kansas City to get out of their comfort zone and consider opinions that might burst their social media bubble.

What we like about this talk is that there is honest disagreement that doesn't prevent both sides from getting their point across . . . Pete Mundo is one of the rare conservatives who can uphold his ideals without getting angry and follow-up with incisive questions and analysis.

Similarly, Mr. Washington breaks the mold when it comes to local crime fighters and maintains his INDEPENDENCE from political talking points in favor of focusing on facilitating tips and info from the community.

So far in 2020, this is the most honest discussions of police issues we've heard in Kansas City and hopefully will inspire more people to move beyond partisan ranting and toward more productive conversations.

Absolutely need more conversations like this not just in KC but all over the country. Hell, nowadays the presidential candidates don't even want to debate.

Actually, there are a lot of debates in Kansas City but people don't want to hear any opinion that doesn't like up with their own.

Mundo knows his stuff. He's one of the few people that the mayor doesn't try to B.S. and knows that he'll get fact checked immediately if he does.


What? Partisan ranting??? The democrats don't want to talk about solutions they love the crime and violence. Didn't we all see them kneel to the rioters and turn a blind eye to the looters? Then when the rioters and looters were arrested they were not charged and returned to the streets???? Stop gas lighting dirty democrats you people caused all of this and you have no intentions of solving anything.

Their is no racial divide when it comes to policing. The faulty premise that blacks are targeted and shot dead is just as big a lie as the "Hands Up Don't Shoot" trope that is still, to this day, fostered onto ignorant folks who don't know better, but mostly onto folks who don't WANT to know better.

Willful impercipience is another cudgel that the media - DNC - BLM/AntiFa - Deep State insurrectionists know will help destabilize society so that these maleficent powers can attain total control by way of one party rule. The lubrication for the gears in this pernicious Progressive goat rodeo is the absolute existential hatred of the white male.

This is a generational conflict, because even your house pets, if they stop and think about it, know, that the inventions, medicines, advancements and ability to enjoy modern civilization, such as it is, is categorically with few exceptions due to the hated white male.

The destruction of our society, MUST begin with the destruction of the White Male, so the lies, legerdemain, deceit, agitprop conveyed incessantly by the Media, Hollywood, politicians, bureaucrats, plutocrats and kelptocrats who seek ever more power, must strike mortal blows at the foundation of all that is good and replace it with a new false history that elects idiots, followers of idiots and destroys the status quo in hopes of convincing those same idiots of a coming Utopia.

Alonzo and Pete can blow each other all they want, the truth is the truth and this has got very little to do with police brutality, you are being manipulated by evil forces who - sure - want whitey dead, but once whitey is dead, you will shut up and obey, or you will be just as fuckin dead.

Damn 7:38, you use words I had to look up like impercipience and agitprop, but all's good and you make great points. Never dumb down words for the readers of TKC who are among the finest minds in this country. Thanks.

I see Alonzo is still kicking this dead horse. What a fucking scammer this asshole is..

"Pete Mundo is one of the rare conservatives who can uphold his ideals without getting angry and follow-up with incisive questions and analysis."

Baloney. Most conservatives do that as a matter of course. It's the leftist-liberals who fly off the handle at the least hint of disagreement, and whose analyses never amount to anything more incisive than "racist!"

Balonzo is an idiot, he’s not even trying to tell the truth

I for once will say Alonzo is correct in black people don't own tents. So who bought an paid for all the tents. Stacy?

chuck dead on the money as always.

still beating the knee in the back horse, if his knee was on anything it was just above her hip, and exactly how long was it supposedly there? The police were very professional about the whole thing. The out of control violent, murderous blacks on the other hand only know how to rape, murder and plunder. I choose the police. Everyday.

Wrong. If the cop did the right thing we wouldn't be in this mess.

Once again the KCPD looks out of control.

Chuck your posts are really gaining traction nationwide, you should be very proud.

9:52 is gopher boi or mayor lickass, you can tell by the obvious lies and propagandist tones.

The only thing we need to be free of is the racist mayor and clowncil members..... and their personal hype machines

Oh chimpy, are you gonna add some more of chucks comments to fstdt website? Pro tip, Chuck doesn’t use his full name and he doesn’t have his name at the top of a post and then post it anonymously. You’re not very bright are you?

I listened to most of the interview. I confess I did skip ahead when Washington started just repeating himself. But he kept on repeating himself wherever I skipped to. This should have been a one minute interview instead of more than 10 minutes.

The cop slammed her to the ground. Obviously Washington does not know what a real slam looks like.

The cop put his knee in her back. Only using enough force to apply handcuffs, not his entire body weight.

Only the cop is at fault because our taxes pay his salary. A red herring argument. Pregnant women have a responsibility too - to avoid situations that put themselves and their babies in danger.

The police at the chaotic and potentially dangerous scene should have formed a discussion group to determine how and whether to deal with the pregnant perp. Sure, why not convene a town hall forum before any arrest. The suggestion is absurd.

And Washington is supposed to be one of the clear thinkers in the black community? I hope that's not true.

The pregnant sow is a welfare parasite and is planning to be a "single mother". She is already a criminal.

Crime fighter my ass. Just another race baiter. He doesn't do shit to fight crime except take/make tips that he convinces people to give him instead of police. He's just a tips hotline middle man collecting reward money. Tells the cops "the dude was in a blue car" and claims credit for clearing the murder.

Alonzo claims to have a brain!

If I hear Pete say "What's going on here" on his talk radio im going to move on!
If you don't know then do the deep dive and get back to the the people who know what is going on.
Baby in the Woods is what Pete is.

Alonzo is a clown.