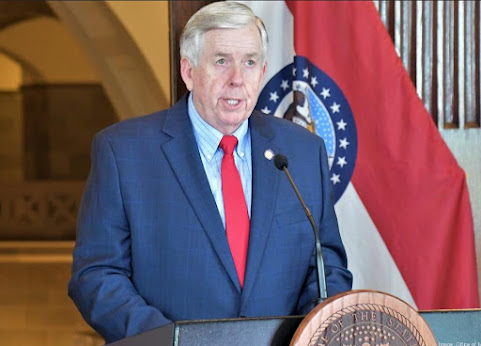 Local media covered the drama when it first broke but it's the kind of nasty campaign stuff that turns viewers/readers away.

Missouri Democrats are playing rough with this one and call out the GUV who STILL hasn't confronted the drama within his own party.

"Gov. Parson has still said NOTHING about the Missouri GOP’s State Rep candidate, Rick Roeber, who was accused by his own children of sexually abusing them. Roeber is the Republican nominee for an open seat in the 34th District in the Lee’s Summit area. Chris Hager is our Democratic nominee hoping to flip this seat blue and keep a credibly accused man out of the State Capitol."

Governor does not hire and fire people for state rep.
All politics is local.
The Star protects crooks like Mike Sanders; his minion Peter Baker and all the developer grifters to bring us convention hotels and massive TIF's.


Radical liberals protect robbers, killers. rioters, domestic terrorists. So looks like they have a week point, or I should say non point.

There's a reason Gov Parson's is called "Guv'nor Guber". The Governor is a serial killer for the state. Incest is no big deal.

Innocent till proven guilty so the Gov couldn't really do anything if he wanted to. Parson is doing the right thing.

If Hunter Biden is a non story so is this.

Governor Parson has lots of blood his hands for him lack of leadership in addressing Covid. He lacks moral leadership. No surprise he would protect a child molester. Slimmy guye.

Looking more and more like Hunter Biden will face jail time.
Also- if Joe Biden elected looks like bi-partisan impeachment in February which will put Kamala as president.
FBI has what it needs.

Looks like Dems will have a first female president by Easter.

But only if Trump is not elected. So... will Kamala commute Joe’s prison sentence?

Will Joe Biden die in prison?

No way around it... Biden corrupt with substantial proof.

Besides... 44 years and a recent poll could not list one accomplishment Joe has. Not one.

Russia, China, Communism didn’t have to fire one shot.

The Dumbascraps need to look in the mirror. As I recall, they had their convention and failed to acknowledge/DENOUNCE the (B)urning (L)ooting and (M)urdering their minions we doing around the nation, while they are nominating a Senile old man, who isn't capable of changing his own diapers and wipe his own ass, let alone run a country

1. Toy Train
2. Street Mural Painting
3. Street naming without voting
4. Joining protesters
5. 1% Earnings tax that locals.. when polled... had no idea it originally was for trash bags.
6. Fake Newspaper that still litters a few driveways despite green internet.
7. The list goes on and on...

Trump for Missouri 2020... because Hunter Biden collected a paycheck from Russia despite no clear skill sets for that segment of BURISMO.
(Last two letters in BurisMO)!!

Other suppression by the Media!
Showing insurmountable lead by Biden as if to discourage Lazy Democrats from voting Tuesday!

Nancy such a liar.
Every time she said they were close to a taxpayer bailout.. I mean stimulus.

Every Democrat controlled city like KC finally thought they had bail out money... I mean stimulus.

Heck even the last KC had to beg can’t-make-all-house-payments-on-time Frank for a handout.

Vote a Republican in office! Remember -even 8 years of Obama made blacks worse off.. ask Candace Owens and follow her for successful ideas!!!

Theirs Republicans fucking their children and they only smokescreen you got is DC Democrats talking points.

with this awful media coverage, likely the democrat wins, but would be funny if, due maybe to all the early votes cast, before this scandal broke, the republican candidate wins anyway. kind of gives you pause before supporting all the early voting because the voters need time to vet the candidates and the candidates need time to present themselves to the voters, or so the thought goes ....

not really the governor's fault this candidate is a perv or used to be a perv, and parson is terrible but he really can't say anything.

kind of a wonderful gift to the democrats - they will pick up a seat, or maybe even better, if the republican wins the seat, constant drama!

I don't really know what the deal is with the Hunter corruption. Did it change even a single Dem vote? Hell no. That is as solid a voting block from the hive mind as I've ever seen. Like something straight out of old school sci-fi. Dems vote D, period; corruption? D, Incompetence? D, Racists? D. Reps are like herding cats, some vote with, some vote against, some vote for cats.

Galloway has yet to produce her two year Clay County audit or even a picture of the coffee maker that Nutle said should be the basis of the audit.
Galloway is unbelievably naive and incompetent.
When will she denounce the failure of Peter Baker to prosecute murderers.
Oh, sorry. They worked closely together while Peter B was State Chair for the Dems.