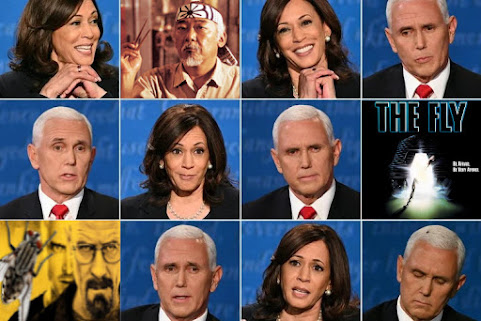 All thing considered, last night's debate was likely the best glimpse at ideologies that will inform the next White House administration. Sadly, nothing was answered and the American voting public was easily distracted by eye-rolling, spin and a flying pest.

Accordingly, here's our look at some of the most informative perspectives on the conversation . . .

Lord Of The Flies

Ahead of Wednesday's vice-presidential debate, the buzz was around whether Kamala Harris or Mike Pence would turn in a standout performance. Instead, the unexpected star of the show was a fly, which landed on Pence's head and sat there, seemingly carefree, for a full two minutes.


Veep Debate At A Glance

Kamala Harris told Mike Pence "I'm speaking," as he interrupted her in last night's vice presidential debate, sparking a meme and rivaling the infamous fly as the most popular moment from the debate.

Rachel Maddow remarks on the energy Kamala Harris put into attacking Mike Pence and the Trump administration in the vice presidential debate for their handling of the coronavirus crisis, contrasted with Pence's subdued style.

There Was No Way for Mike Pence to Defend Trump's Record

Wednesday night's vice presidential debate seemed likely to be a draw. Vice President Mike Pence was coming in as an incumbent, and, unlike President Donald Trump, he's a smooth-talking, unflappable debater. Sen. Kamala Harris was coming in as a sharp-witted former prosecutor who's made her name skewering Trump administration officials in the Senate.

Voters found Democratic vice presidential nominee Kamala Harris to be "abrasive and condescending" at various points throughout Wednesday's debate with Vice President Mike Pence, pollster Frank Luntz told the Fox News reaction panel. "The complaint about Kamala Harris was that she was abrasive and condescending," said Luntz, who monitored the reactions of 15 undecided voters from eight battleground states throughout the evening.

Debate moderator Susan Page was able to keep the candidates in check. While there were a few interruptions, there was nothing that approached the verbal hectoring that defined 's outing against Democratic nominee last week.

Pence won plain and simple. Feel sorry for those who couldn't pay attention because of a fly.

They both didn't answer the most important questions. Once again the American voting public loses another debate.

She is just an uppity colored woman.

A FLY? That they are going on about a FLY shows that they know they lost on the issues. Pathetic.

Maybe SHE was stocking the shelves with groceries at Hiden Biden's hacienda??

As usual for a debate, the only questions were those found among Democratic voters top-5 lists. All special interest and political soap opera crap. None of the questions that speak to a Conservative base. Where was:

Pence was forced to use his time referencing these issues. And thank God he did, instead of playing by the biased rules. Even with the rules in her favor, and with the postscript media-splaining her ineptitude and condescension, Kamela still sucked wind.

Kamala completely shit the bed. She was just out of her league and looked bitchy trying to keep up. This is why they've kept her hidden.

Given all possible assistance by the silly moderator, Harris still gets crushed. She looked angry and unprepared.

Pretty painful for the Democrats, who are desperate to move the conversation to a random fly in the wake of a disastrous, unprepared performance by Harris.

As the debate went on, Harris seemed to lose her confidence and mojo, judging by the expressions on her face. Pence's answers -- and maybe his Supreme Court question directly to her -- must have started to get into her head and take her off her game. Can't believe Biden/Harris won't answer the question about the Supreme Court with a "non-answer" answer of some sort. They just look weak and devious by their current response to that. Maybe because they are, though.

I voted for Obama, but now the Democrats have become the party of lies, lawlessness, abortion (even after the baby is born), violence destroying once great American cities, high taxes on our paychecks, weak military, open borders, free healthcare for illegal aliens at taxpayer expense, defunding the police, sanctuary cities, sending millions of taxpayer dollars to Iranian radical leaders, and more idiotic ideas. No thanks.

Harris lied about history at the debate. Abraham Lincoln did not send a Supreme Court nominee to the Senate in October 1864 because the Senate was out of session until December. He sent a nominee the day after the session began, and Salmon P. Chase was confirmed the same day. It was never about letting the people decide.

BREAKING NEWS: The fly has been transported via helicopter to Walter Reed Hospital. More details as they're made available!

@ 5:55 - She answered the more substantive questions? How about her answer to the direct question "Would Joe Biden and you stack the Spureme Court?" Remember the answer? Yeah, me either because I couldn't hear it over the crickets. Pence nailed her but not like she is use to by Willie Brown.

Is it a lie that she claimed to be a Black woman? Her heritage is Jamaican and India Indian, right? She said it at least a half dozen times. If I were Black I'd be pissed.


Kamala Harris has the audacity to call Joe Biden a racist "which he is" but Harris is related Hamilton Brown who started and owned Brownstown in Jamaica. It was a sugar plantation and he owed slaves.
Here's the sick part of this. Black democrats will vote for her because she is black. There's nothing worse than a black democrat "traitors" they betray the people who fought for them. To me they are not only stupid they are SCUM. Oh and a lot of KKK members are democrats after all they started it. That goes out to people who want to argue that point. Take a look at Will Quigg in California.

BREAKING NEWS: The fly has tested positive for COVID 19!!! More details as they become available!

The only distraction is the msm unwilling to admit that Harris outed herself as a horrible vp candidate.

Could anyone image her as a vp let a alone president...scary.

Pink eye and the Fly: The Mike Pence story.

Don’t worry, when rapey joe gets article 25’d and kicked out, commie Harris will get hilly to be her v.p. Once hilly gets in she’ll have comrade Harris “arkansided” that’s murder for you dimwits that don’t know! Then hilly will be President! And all will be right in the world! Bwa haha!

Remember dimwits, this is what you wanted amiright! Hahahahaha!

BREAKING NEWS: The fly has been given steroids and is busy signing documents. More news as it's made available!

Where's Mr. Miaggi when you need him.

I would like to play poker with Heels Up Harris. Her face is nothing but tells. Seeing her in split screen did not do her any favors as the smirks and the nods were extremely off-putting and distracting.

The fly landed on Mike pence because he was dead because Kamala killed him in the debate.

Kammy demonstrated what a simp she is She’s not capable of the job. Silly dirty Skank. If I were Pence, I would have been more worried about an STD from Kamala, being that close. Pence, smoothly did the job another liberal moderator. He kicker her silly ass. The neutral sites, and there aren’t many, showed Pence winning by over 40 points.

The fly was Pence's only black friend.

Even the Democratic Party doesn't like her!
Remember, she was a Democratic candidate for President in 2020. She stood on the stage during the Democrat debates and told everyone that Joe Biden was an old out-of-touch racist white male.
She was a poor campaigner, and failed to connect with voters, even black voters.

Harris is the daughter of a mother from India, and a father from Jamaica. Her father's family owned black slaves in Jamaica.
The fallacy that she's an African-American woman who has anything in common with those whose relatives actually experienced discrimination is a joke.
She's in a politically-arranged marriage with a Jewish attorney, to give the appearance of normalcy. She has no children of her own.

Harris sold her soul years ago, in order to rapidly rise in the California political world of corruption and moral decay.
She publicly flaunted her personal relationship with Willie Brown, and received a high-paying appointment to a state agency. Once she gained a foothold, she started climbing, trading favors, taking kickbacks, paying bribes, etc. As Attorney General of California she caught the eye of the Obama administration (her background is similar to Obama) as someone more than willing to compromise the law for political purposes.

For the 2020 Democratic Party nominee for President, she had both the support of the Obamas and Clintons. There was a reason why Obama didn't endorse Biden until everyone else had dropped out. Because Harris is such a terrible candidate, they had to settle on a Trojan-horse strategy to get her into office. Democrats hope to wheel ancient, mind-ravaged Joe Biden into the White House, only to have Kamala Harris emerge from the horse's belly and run the operation while Joe watches old black and white movies in the basement. "You're a dog-faced pony soldier!"

A vote for Joe Biden is a vote to allow uber-liberal Marxist Kamala Harris the ability to destroy our nation.

Pence put the ho in her place.

^^Yes he did! Right into the office of Vice president!! Thanks Mike!

A fly ad a flea were caught in a flue
they escaped to a room where there was a "big To-Do"!
So the fly flew and the flea fled,
but the fly got stuck to a sock puppet's head!

There's no such thing as an undecided voter. They're just Trump supporters disguised as normal.

....The 'fly' landed on the only pile of shit on the stage...wait till you see what lands on tRumpoopie after the election! Not even Walt Reed
Hosp. can cure that!.....Pink Eye Stink Eye!....

You can tell Pence won the debate easily because the only thing the media talks about is the fly that landed on his head. Nice job, Mike. Kamala's voice is as irritating to flies as it is to humans. It's like fingernails on a chalkboard. It's how she calls in her voters.

Smart FLY The insect would not get near an Angry Harris. She will be President Sleepy JOE will not make it 80 days. AND you Liberals will suffer the most .The Conservatives are prepared .They have Stashed there cash, have a half of Beef in the freezer.And will enjoy the show.

It’s obvious the Dems are going to try and re-write history, pack the Supreme Court (neither Kameltoe or Sleepy would answer). The Democratic Party wants to make us a Socialist country. Socialism has never worked, not anywhere.

....speaking of 'kamaltoe', what is that thing tRumphucker is married too? Can't understand a fuckin' thing she says, 'Be Better'?....Speak better, learn our language, or go back where you came from....and take the stink-eyed fly catcher too......GWAN-GIT!