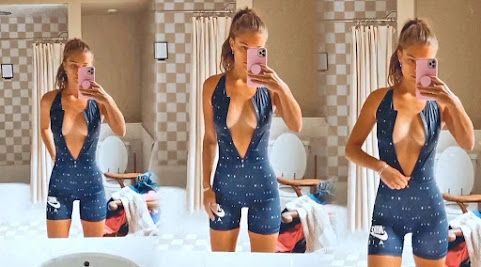 Right now hottie Nina and her thirst trap Insagram goodness inspire us to take a peek at pop culture, community news and top headlines for tonight . . .

KANSAS CITY, KS (KCTV) - Kansas Speedway announced Tuesday that all available grandstand tickets for the NASCAR Cup Series Hollywood Casino 400 at Kansas Speedway on Sunday, October 18 have been sold out.


Catch A New Job, Not COVID

Nina Agdal showcases her pert posterior in a navy leotard

She has been staying in the Hamptons during the coronavirus lockdown with her boyfriend of three years Jack Brinkley-Cook and his famous family. And Nina Agdal looked sensational as she showcased her incredible physique and very pert posterior in a navy leotard as she posed for playful new snaps.

The Supreme Court granted a request from the Trump administration to halt the census count while an appeal plays out over a lower court's order that it continue.

Democratic presidential nominee Joe Biden's lead over Donald Trump has surged to a record 17 points as the US election enters its final sprint, an Opinium Research and Guardian opinion poll shows.


Not Exactly A Promise

WASHINGTON - Again and again, Amy Coney Barrett insisted to senators on Tuesday that she has no "agenda" on issues like the Affordable Care Act, the future of abortion rights or same-sex marriage, and that she would be nobody's "pawn" if confirmed to the Supreme Court.

On Tuesday, during the confirmation hearings for Judge Amy Coney Barrett to the Supreme Court, Rhode Island Democratic senator and ardent leftist Sheldon Whitehouse spent his entire allotted time not asking Barrett any pertinent questions, but mansplaining his bizarre conspiracy theory that "dark money" was behind Barrett's nomination as spoke mysteriously about "forces outside of this room."

You've probably heard that many of us are craving good old comfort food these days, as we change our patterns and habits due to the pandemic. Little things you can look forward to-like trying a new eatery-can lift your spirits and provide a happy diversion to your day.

Courtesy KC Glory One story we do not get tired of following here at The Pitch is that of the Kansas City Glory. This women's tackle football team has long been poised to become a fan favorite team in our community, despite constant setbacks from... y'know, 2020.

Hide Transcript Show Transcript 78 IN ST. JOSEPH. 79 PERCENT -- FOR SEDALIA. IF YOU ARE GOING TO HAVE DINNER OUTSIDE, I THINK THAT WILL BE JUST FINE. IT WILL BE WARM AND STAY DRY AS WELL. LOWER 50'S TOMORROW MORNING. THE WIND WILL START TO PICK BACK UP.


LOL at the asshat Demo senator talking about "dark money" behind Judge Amy! ..

Biden ain't ahead in anything other than being a loser all the time.


Nice ass on Nina --balances out the pics of Klobuchar and the lady football dykes.

Sleepy JOE has Dementia he Don't know what year it is There are hundreds of is flubs out there. And you're fellow Americans are voting for Him .TRUMP WILL WIN THE INTERNAL POLLS SAY TRUMP HAS A 96 PERCENT CHANCE HE WILL WIN. DON'T PAY ATTENTION TO THE MEDIA POLLS They over sample,Democrats 11 percent. And under poll Independent voters and Republicans don't answer there phone for telemarketers.Trump has a 6 percent lead in Reality .ENJOY THE SHOW


Biden’s malfunctionin’ noggin
Is covered with terrifyin’ hair-pluggin’
As his mind is glidin’
Into the dark horizon
And shouldn’t be presidin’.

Ease up on those steroids Retro, they're making your "episodes" worse!
"Internal Polls"? WTF are you talking about, your "gut feeling"?

We are enjoying the show, watching all you Trumptards practicing your cheerleading routines on the Titanic.

The only interesting part about that poll is its claim that the majority of voters who plan to vote on election day will vote for Trump but so many mail-in voters will select Biden that the election will swing his way. We are being prepped for the steal.

And all Biden has to do is not be Trump.

Sometimes wonder if the Marxist Media says Biden is up by 17 points as they know the election is already fixed with election fraud.

There is absolutely no enthusiasm from blacks, whites, asians or hispanics for Joe Biden or ANTIFA or Marxism that has taken over the Democrat Party.

Everyone is sick of the violence and anarchy is the Democrat controlled cities.

Trump has more support than he did in 2016 against Hillary Clinton who was a far stronger candidate than Joe Biden.

So saying Biden is up 17 points makes no sense whatsoever.

What support for Trump?

Everyone is not only sick of his lying, bullying and abject failure to accomplish anything, but also sick of the Republicans in the Senate and on the Supreme Court so desperately trying to control the Election that the pay no attention to the fact that they are destroying the American People's faith in their own Government.

Trump got into Office on an anti-Clinton vote, and since day one has been creating and anti-Trump tsunami.

Hillary was ahead in the polls too said...

17 points! Holy Malarkey! Sounds to me like Biden is going to roll over Trump. Well, you Democrats did it. I see no need to vote now. Way to go Biden. You are a shoe-in!

And all Biden has to do is not be Trump.


Same thing was said about Hitlery. NEXT! Piss off when you want a shoulder to cry on. Jus' sayin!

Nah. His rallies are enormous and his voters are incredibly motivated. You're confusing your own TDS with reality.

It doesn't surprise me at all that Biden is up 17 points. Lots of enthusiasm for him. In fact, there was LOTS of enthusiasm after the "Gay Bikers for Biden" protest ride the other day. Let's just say, it was somewhat of a naked lovefest, and I am pretty sure I saw Q-Ball make a come-from-behind appearance.

^^^ Glad you can keep yourself amuses in times like this, Trollzilla!