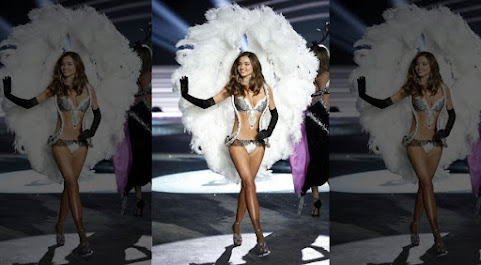 Some might call hottie Miranda a "fallen angel" but she remains one of our faves and right now her body of work inspires this peek at community news, pop culture and top headlines . . .

KANSAS CITY, Ks. - It's not even Halloween yet, but Christmas lights are going up around Kansas. Lights of Christmas up near Kansas City, Kansas has been inundated with calls to decorate for the Christmas season. Ron Holms with Lights of Christmas says he thinks everybody is done with 2020 and ready to have a [...]

Amber Alert canceled after 2 girls are found safe in Oklahoma

LEAVENWORTH, KS (KCTV) - UPDATE: According to the authorities the girls at the center of this Amber Alert are safe and the suspect has been taken into custody. They were found near Erick, Oklahoma. The Amber Alert has been canceled. No other information is available at this time.

After closing during the pandemic, a Waldo restaurant is reopening with a new twist on its old concept. While some restaurants are closing for good because of the pandemic, Boru Ramen is reopening as Boru Asian Eatery, after being shut down for six months."I'm really looking forward to having a bowl of spicy miso ramen which is my favorite," co-owner Domnhall Molloy said.He said he's happy to be getting back to business after closing Boru Ramen in April."It was a tough decision.

They went out of their way to reveal that they weren't interested in renewing a contract with Miranda Kerr. When it comes to the acting, music, and sports industries, most people seem to have a very good understanding of how they work.

President Donald Trump has expressed doubt at the prospect of Republicans continuing their control of the Senate next year and said he just cannot support some of the party's candidates. An unnamed attendee of a private fundraiser at the Nashville Marriott in Tennessee told the Washington Post that Trump admitted to donors on Thursday that the "Senate is very tough."

Democratic presidential nominee Joe Biden criticized attacking a political candidate's children as "crass." Biden said he had made a "specific decision" to not mention President Donald Trump's children through his campaign, despite the president's repeated criticisms of Hunter Biden's personal history and business relationships.

That's one small step for man, one giant vacuum ride toward oblivion for hornet-kind. Space-suited bug specialists successfully vacuumed up a nest of so-called "murder hornets" in Washington state on Saturday, capping a months-long effort to swat back the invasive, bee-slaughtering pest.


FIGHT FOR THE FUTURE

DONALD Trump Jr posed in front of a "Don Jr 2024" sign as he fuels rumors that he intends to follow in his father's footsteps as president. Trump's eldest son took to Instagram today to share the photo of him pointing at the enormous banner at the Fallon Nevada Livestock Auction on Wednesday.

More Than 50 Million Americans Have Already Voted In Presidential Election

With 11 days remaining before Election Day on Nov. 3, U.S. elections officials have already received more than 50 million ballots, or roughly 37% of the total number of votes cast in the entire 2016 presidential election, leading some experts to predict a record-setting 150-million-plus American citizens will cast a vote this year.

Ford Motor Company kicked off production on the long-awaited, all-new 2021 F-150 at its Kansas City Assembly Plant earlier in October.

'Cabin fever is real': No Vacancy books a hometown escape to your own personal hotel

In contrast to its neon name, No Vacancy offers plenty of room for staycationing Kansas Citians at its newly-opened Crossroads hotel - a cozy getaway for pandemic-grounded guests looking to recharge without the risk of travel, said Spencer Sight.

Creed - My Own Prison the song of the day and this is the OPEN THREAD for right now.


Wait what? Christmas lights going up around KC? Why? Liberals in KC hate God and country so why would their be a big deal about Christmas lights? What is KC worshiping? It sure isn't God. I thought Quinton Lucas would follow his radical liberal buddies in Cali and Cali is telling people they can't have Thanksgiving in their own homes unless they eat outside let alone Christmas we all know how the radical left hates God. Vote for the radical left and you are going to get what Cali is getting. A totalitarian life of being told what you can or can't do right down to how and where you can eat your Thanksgiving dinner until of course when they remove all of these things for good and they will.

There, their, they're; learn basic English retard and someone might care what you have to say.

The illiterati will be incoherent no matter how well they spell.

Grammar bitches means "I'm too stupid and lazy to learn how to use their, there, and they're in a sentence properly."

The biggest story ever :