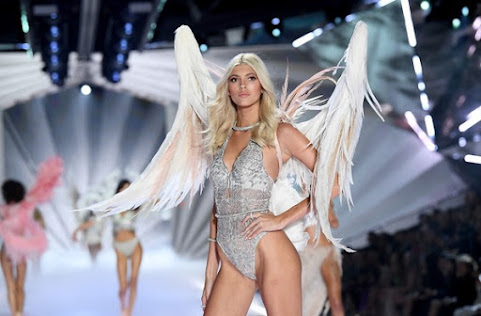 Inspired by Missouri angel Devon, once again we start this Sunday with a peek at pop culture, community news and top headlines for our most dedicated readers.

KC Wineworks hit by thief for second time this year

KS Secretary of State: Don't rely on post office with your mail-in ballot

The Kansas Secretary of State said voters should not rely on the post office to get their ballot delivered.Kansas says more than 460,000 mail-in ballots have been sent out through the mail.

Victoria's Secret model Devon Windsor and husband Johnny Barbara (AKA Johhny Dex) have made no secret of their affectionate relationship over the years. The couple regularly post about each other on social media and often gush about their love for each other. Main image viaInstagram.


Pushing Back Against MAGA

GOVERNOR Gretchen Whitmer has slammed Michigan Trump fans for chanting "lock her up" at a Saturday rally, saying it puts her family "in danger." The chant comes a week after the FBI uncovered a plot to kidnap the governor by a local militia group.

SAN FRANCISCO (AP) - A free speech demonstration staged by conservative activists quickly fell apart in downtown San Francisco on Saturday after several hundred counterprotesters surged the area, outnumbering and attacking those gathered, including knocking one in the mouth.

Part of the act is tactical, aides say. Trump thrives on being underestimated, and they point to how the president came from behind in 2016. National polls at the time showed Trump lagging against Hillary Clinton in the weeks leading up to the election, yet he continued his marathon of rallies and latched onto news about Clinton that helped him paint a picture of elites in Washington that boosted his campaign.

As the Coronavirus Surges, a New Culprit Emerges: Pandemic Fatigue

Exhaustion and impatience are creating new risks as cases soar in parts of the world. "They have had enough," one U.S. mayor said of her residents. CHICAGO - When the coronavirus began sweeping around the globe this spring, people from Seattle to Rome to London canceled weddings and vacations, cut off visits with grandparents and hunkered down in their homes for what they thought would be a brief but essential period of isolation.

House Speaker 's (D-Calif.) deputy chief of staff Drew Hammill said Saturday that there has been some "encouraging news on testing" following the speaker's call with Treasury Secretary to discuss the details on a possible fifth coronavirus relief package.


Lighting The Way To Holidays

KANSAS CITY, MO (KCTV) -- As the holidays quickly approach, Swope Park is preparing for their drive-thru light show. Winter Magic, the longest animated light tunnel in the Midwest, stretches about one mile on Oakwood Drive in Camp Lake of the Woods. The one-mile display is completely adorned with lights.

KANSAS CITY, Mo. - On a cool Saturday night, the glow of dozens of candles created a warmth and sense of reverence emanating from the steps of the Kansas City Museum. The candles -- part of the Mexican holiday Day of the Dead, or Dia de Muertos, -- guided the spirits of loved ones who have passed back to earth.

The wind settles down tonight and turns to the northwest. It won't be as windy but we might still have some gusty winds at times as temperatures drops into the low 40s by daybreak Sunday. Sunday will be a much cooler day with an overcast sky, a chance for drizzle and a high of just 49-degrees.

ZZ Top - Waitin' For The Bus/Jesus Just Left Chicago is the song of the day and this is the OPEN THREAD for right now.


Nancy pelosi and Chuck Schummer are the ones who have blocked the latest stimulus money.

Don't forget it was Dr Fauci back in 2016 who said there was going to be a pandemic during the Trump administration. How did he know this if the democrats weren't involved with it? It's a dead give away as to who is behind this virus with China.

Did the People's Tent City have another scavenger hunt at KC Wineworks?

So about that stimulus Nasty Pelousy.... Are you going to have another meltdown on a friendly news outlet today like you when you went full crypt monster on Wolf Blitzed Turd?

Man, the "Bandit/Chuck/Charlie Horse/Retro Rocker" guy is busy today, when is he going to start posting some more of his repetitive "cut-and-paste" crap?

When Nazis demand free speech it's so they can be free to organize a political party that advocates mass murder.

And that explains it all. She' running cover for the corrupt, senile, old fart! 😏🙄🍿

Find some quotations to link to that aren't from the Koch Stable of Conspiracy Creators, Bandit!

Of course, it's difficult to back up your crap from anywhere in the Real World, isn't it?

Whitmer looks like a good choice to play the role of the deranged ex-lover who boils the family's pet bunny as revenge, if they ever do a remake of "Fatal Attraction."

You mean the Koch brothers that run a good part of green energy in the People's Republic of California? Those Koch brothers? Spare us the conspiracy theory bullhshit k? Back to Democrat Underground where you belong. 😆

The Day of the Dead is a unchristian pagan holiday. It glorifies murder and the hispanic routine of solving problems with a gun. Its for the ignorant and unchristians to celebrate.

That Governor Witmer looks exactly like Bruce Jenner in drag. Amazing. They may be related.