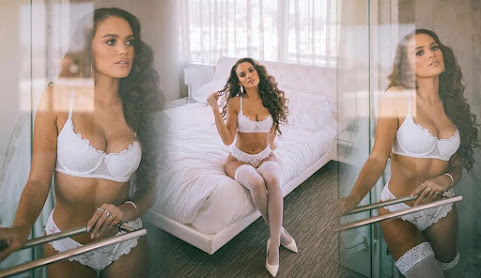 There's a lot to unpack today but for right now we share this peek of hottie Maddy doing a bit of promo work as we share pop culture, community news and top headlines.

The Kansas City International Airport's new terminal is expected to be completed in 2023, and visitors upon landing will be welcomed by the largest public art project in Kansas City history. The city has launched a global search for artists to create 10 unique installations throughout the $1.5 billion new terminal and parking garage.

KANSAS CITY, Mo. - Some parents with students in Kansas City Public School are feeling a little deflated after the district's most recent board meeting. Board members heard that some students might return to the classroom - at earliest - November 9. But there are a lot of moving pieces to the decision.

With plenty of opportunities to compost at home - and KC Can Compost launchings it's own Urban Compost Initiative Oct. 24 - prioritization of commercial compositing stands to deliver the most significant and immediate impact on the planet, Kristin Chamberlain said.

The black bralette and high-waisted briefs from Rihanna's line helped the model feel confident and sexy When Rihanna, 32, sent over a few pieces from her newly-dropped lingerie collection, Klum, 47, put on a pair of the sexy black high-waisted briefs and bralette to throw an impromptu dance party in her bedroom.

Trump on if Biden wins: 'Maybe I'll have to leave the country'

President Trump Joe Biden Joe Biden Trump jokes he'll 'find a way' to fire Gov. DeSantis if he loses Florida Biden hits Trump's response to attempted kidnapping of Michigan governor: 'What the hell is wrong with this guy?' Trump on if Biden wins: 'Maybe I'll have to leave the country' MORE .

ABC is keeping silent amid growing criticism of its town hall with Joe Biden after two of the attendees who asked the Democratic nominee questions were identified as an Obama speechwriter and the wife of a prominent Pennsylvania Democrat.

More people watched Biden on ABC than Trump on NBC, MSNBC and CNBC

Joe Biden's town hall on ABC averaged 13.9 million viewers on Thursday night, easily surpassing the Nielsen ratings for President Trump's town hall on NBC. That alone was a result virtually no one in the TV business expected. And that's not even the most surprising part.

WASHINGTON - The fighting in Congress over Amy Coney Barrett's confirmation to the Supreme Court started even before she was nominated. Democrats warned of the precedent set if Republicans rushed through a nominee in the middle of a pandemic and presidential election, arguing no nominee should be considered until after voters cast ballots.

Climate change, race and Covid on the agenda for final presidential debate

The final presidential debate will focus on the coronavirus pandemic, race and climate change, among other topics revealed by the Commission on Presidential Debates on Friday. NBC News' Kristen Welker, who will moderate the debates, will also ask President Donald Trump and Democratic candidate Joe Biden about national security and more abstract concepts, such as "leadership" and "American families," according to a commission news release.

10,000 fans allowed at Kansas Speedway for this weekend's race

KANSAS CITY, KS (KCTV) -- When NASCAR returns to Kansas Speedway this weekend, a limited number of fans will also be allowed out at the race. Track officials have a cap of 10,000 fans for Sunday's race. They say they are working closely with state and local health officials to make the track as safe as possible for everyone involved.

KANSAS CITY, Mo. - A new coffee shop has rolled into the River Market. Make in Kansas City is now serving coffee inside of an old Trolley car near 5th and Delaware streets. Made in Kansas City co-owner Keith Bradley said they wanted to expand their business to a unique place.

Windy, warm for your Saturday

Hide Transcript Show Transcript THAT COULD CAUSE A PRETTY BIG ISSUE SO A HIGH FIRE DANGER TODAY IN THE COUNTIES THAT ARE LIT HERE IN PURPLE THAT INCLUDES WARRENSBURG BELTON BUTLER, CLINTON, SEDALIA. SHOW COAL CAMP ALL OF THOSE TOWNS DOWN BY THE LAKE OF THE OZARKS. ALSO UNDER THIS HIGH FIRE.

Halsey - I'm Not Mad is the song of the day and this is the OPEN THREAD for right now. Keep going for even more local links . . .

Industry design secrets to selling a home in 2020

KANSAS CITY, MO (KCTV) -- COVID-19 has changed nearly every aspect of life, including how you sell a home and what design aspects are important to buyers in 2020. Trend expert and style Director for Better Homes and Gardens, Max Wilker, explains ways you can make the process more simple.

It's one of the most dangerous times of the year for drivers. Over the next few weeks, deer will be more active."This is the season where we see an increase in deer versus vehicle crashes," said Sgt.

KANSAS CITY, Mo. - Anyone who has visited a COVID-19 community testing site in the Kansas City metro likely has run into Raquel Garcia. She's a community health education nurse at Truman Medical Center. "The difficult part for me is getting people to understand how serious this is," Garcia said.

KANSAS CITY, Mo. - Up until now, the only place a Kansas City resident could go to vote absentee was Union Station. But starting today, two more locations are opening for people wanting to participate in the election.

PRAIRIE VILLAGE, Kan. - On a trip to the grocery store during the COVID-19 pandemic, Billy VonWolf placed his young son in the shopping cart. Then the father's wheels started turning: how safe from the novel coronavirus is his son and family while doing their essential errands?

COVID-19 case surge: Here are where Missouri, Kansas stack up with almost every state seeing an increase

WASHINGTON (NEXSTAR) - As coronavirus cases in the United States climb towards another peak, new daily cases have reached their highest point yet in 17 states, according to the New York Times. On Thursday, new confirmed cases climbed over the 65,000 mark - a total the country hasn't seen since the end of July.

Hide Transcript Show Transcript NONE OTHER. BOXING IS IN KANSAS CITY NATIVE ARMANDO MORRISON'S BLOOD. I BEEN BOXING EVER SINCE I WAS 10 OR 11. HIS GRANDFATHER ONCE FOUGHT MOHAMMAD ALI BACK IN THE DAY, BUT MORE RECENTLY COVID 19 HAD THE SPORT BACKED IN A CORNER.

Ghostly Guardians at The John B. Wornall House

The description on the back of this Chrome style postcard published by James Tetrick, 619 W. 33rd street in Kansas City, Mo. in the late 1960's reads: "The Wornall House is owned by the Jackson County Historical Society. Built by . . .

The Ambassador Hotel Kansas City, Autograph Collection is continuing its streak of revamping its space. The hotel at 1111 Grand Blvd. in downtown Kansas City has transformed its lower-level event space into a Kansas City-style jazz club, Lonnie's Reno Club.

Arrowheadlines: Despite the loss, Kansas City was still 'wildly impressive' at various points

NFL Week 5 grades: Raiders get 'A+' for Chiefs upset, Cowboys earn 'B+' for overcoming Dak Prescott injury | CBS Sports While the Chiefs did get handed their first loss of the season, Kansas City was still wildly impressive at various points in this game.

KU basketball's Silvio De Sousa said he will opt out of the upcoming basketball season."I have made the difficult decision to opt out this season to focus all of my energies on some personal issues," De Sousa said in a tweet.

LOUISBURG, KS (KCTV) - It's finally starting to feel like fall, and families are taking in fall traditions like pumpkin patches with a few changes. Olathe's Jayden Henderson doesn't hesitate for a second when asked about his favorite part of his annual visit to Louisburg Cider Mill.

Biden can get viewers, Trump will get votes!

And yet all of the polling reports that he's several points behind. Weird.

Will the arts community allow white artists to display works at the airport or do they go to the back of the line behind Iceland artists?

And yet this time in 2015 polls had Hillary ahead by 80 points. Weird huh?

As always with Trump, strip out a huge amount of money for yourself, bankrupt it, then walk away, except this time this the United States Of America.

Would be have been nice to be able to read about Lonnie's Jazz club but the KC Business Journal website sucks like a woke Karen on her knees at BLM rally.

Does everybody remember the 1% for art rule the city forces on every city project? One percent of 1.5 billion is 15 million dollars, that’s insane and stupid, but nobody said the boy blunder and city clowncil were smart. Maybe Stacy Shaw should put tents up at the airport and protest for that money? Just a thought.

Some artist is gonna get rich off of this scam.

12:14 it’s kinda like the biden Ukraine deal, hiden joe biden gives 1.8 billion dollars of taxpayer money to Ukraine and then portions of that money are funneled back to the biden family and friends through various no show or no previous experience jobs. Same thing will happen at the airport as any other city project.... a little for you, a little more for me.

Don’t forget that sLIE bought a million dollar loft after he got out of office.....

"Trump on if Biden wins: 'Maybe I'll have to leave the country'"

That might be the only way he can escape jail. Maybe Biden won't have him extradited. Maybe Putin will grant him amnesty--or maybe he can find an Ecuadoran embassy somewhere that will keep him in hamburgers and French fries for the rest of his miserable life. At any rate, he'll FINALLY do his part to make America great again.

The MAGAT MELTDOWN continues! 16 days, bitches, until President Trump is forced to leave the country and avoid Federal and State prosecution.

VOTE HIM OUT! LOCK HIM UP!

Hey, by the way, the Biden family's been caught red handed influence peddling to China.

^^^^And yet Hunter is not running for office. Neither is Ivanka, Jared, Don Jr., or Eric. Weird.

Would be nice if trump left the US, hope he takes all of his MAGA followers with him.

Trump Landslide incoming 45 states or more go for Trump. The silent majority wants law and order.
Cannot keep burning and looting everytime some dumb ass resist arrest. No matter their color or if they are no fentanyl, PCP or pregnant.

^^^You're dreaming. I hope he wins, but by as narrow a margin as possible so I can watch leftists' heads explode.


That women on the left of Jim Crow Joe has a transgender little girl who is only 8 years old she wanted to know what Jim Crow Joe thought of that because her 10 year old wants to do it, and he said it was O.K. That's not O.K. an 8 year old doesn't have the ability to make that decision that women needs her kids removed from the home for child abuse.

And yet that woman is not runni9ng for anything. Weird.