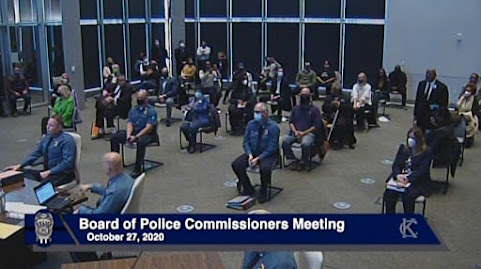 Today, arguments against the KCPD Chief took on a religious fervor.

Meanwhile, the mayor has been silent on the issue and other members of the board haven't moved to take a vote.

"According to a video feed of the meeting, officials paused the meeting after Rev. Vernon Howard of the Southern Christian Leadership Conference stood up and started to preach, which included a call for Smith’s resignation. Howard's speech came after the conclusion of public comment, during which more than a dozen people spoke."

An argument for the Chief's tenure should focus on his effectiveness. With the murder record this year, it's hard to make a case for that. But the same old social justice b.s. isn't going to work.

Given the circumstances, I think the Chief is going a great job. This isn't like any other year. The pandemic has made it harder for everyone to do their job.

There is a lot of support for Chief Smith. People want him to stay on.

People need to go to the Chief's south Kansas City home off of State Line and do protests in front on street until he resigns. He may not quit but he sure wouldn't get any sleep at night.


I have to agree that the chief needs to go it's obvious he can't handle the job. To say the pandemic has anything to do with the crime in the city is a cop out and ignorant. He just plain and simple can't handle the job or doesn't want to. His kneeling with the mayor in the street while uneducated thugs looted and destroyed speaks volumes. There is no excuse in the world for the crime in this city other than lack of law and order. The mayor and the chief are praising them and that's inexcusable and cowardly.

Why was this ass hole allowed to keep speaking when he wondered into his own opinioN ? F--k him and his lazy BLT ass, go hit the street with your message jack ass.

He's only being targeted because he's a white male ... easy target for the social justice warriors.

Like the police, at this point, have any effect on crime.

This is a Democrat city and the priorities are NOT on crime prevention - but the enforcement of a Progressive/BLM/AntiFa agenda which assigns blame for everything, up to and including racist white snow, to "Systematic Racism". The results are evident in cities all across America, where Democrats hold sway and the BLM necrosis eats away at the Rule Of Law.

It is now, defacto, legal to resist arrest if you are black and expect the entire city to burn if Law Enforcement doesn't kiss ass, fire and prosecute the cops for enforcing the statutes on the books and humiliate them in the local media as "RAYCISSS!!!"

The continuation and escalation of "The Ferguson Effect" will continue to wreck neighborhoods, cities and ANY geographical area, where the Democrat/BLM/AntiFa/Media machine grinds up citizens and police officers in the WOKE Wood Chipper.

First off what the hell has Vernon Howell the 3rd done to prevent the black on black murders besides nothing?

Secondly, why is it the chiefs fault and why isn’t the black community doing something about it? If whitey tries to help then were racist so.

Thirdly and this is the typical demoncrap blame game, instead of blaming the criminals they want to blame everybody else for their murderous ways, if anybody is at fault besides the blacks theyselves you could put some blame on Petersucker for her revolving door of probation or just flat letting them go without charges.

All the cops there should have pulled their guns, shot that uppity coon full of holes, and deflated that gasbag.

Howard should go to the Lorraine Motel and just wait on the balcony... there’s somebody who is scam artist. Ask him why he’s no longer head pastor a Second Baptist. #Handoff #crooked

It would be difficult to find a better example of the pitiful state of "leadership" in the black community than someone like "Reverend" Howard.
And if you ever might wonder why the black community and the neighborhoods east of Troost find themselves in an endless downward spiral of despair, a clown like this guy is Exhibit A.
Does he have ANY specific policy or procedural recommendations?
Has he developed a serious understanding of the criminal justice system and can make suggestions as to what should be improved?
Has he done anything at all to roll up his sleeves and get out in the neighborhoods and take his healing powers to the thugs perpetrating all the black-on-black murders?
His one claim to fame is that he might have one-upped Stacy Shaw for a day.
Sad.

That would be funny

What’s even more sad is that crazy Stacey and the Reverend who couldn’t keep his trap shut have made the news headlines.

If you ignore them, they eventually go away.

I was really curious as to why there weren’t any pro police people at the meeting, then after giving it some brief thought, I guess all those people were at work earning money for their families.

Curious how much tax payer money was going to support most of the people that disrupted this meeting that had time out of their day to come disrupted and spew hate and racism in the meeting.

It wasn’t bad until the girl that spoke last began spewing all of her hatred and while accusing others of racism she herself was more racist than anyone probably ever could be.

Sorry now that I watched the stream of the meeting. Just pissed me off.

The lesson is avoid blacks in all cases for your own safety. The chip on their shoulder has grown uncontrollably since Mikey Brown disobed and set a terrible example on how to make a family rich. F--k blacks.

Great idea. What is your address? I am feeling a protest with looting feeling coming on.

I agree that the police chief should step down. When the community lacks confidence in your ability to be a leader it's time to go. The black community feels he is racist and unleashes his dogs to attack black people women and men. The police has been accused of killing at least 6 unarmed black men just this year. He needs to step down NOW!

Who the fuck is "Reverend Howard" ?

Well no one will take the Rev., Fat Ass Stacy, the old crazy lady, or the skinny black chick with acne and bad hair extentions serious after that stunt. Where's the PCP head from 35 and Prospect when you need him?

GET BACK TO CAMPING!

10:49, why isn't trust a two way street? The KCPD has no reason to trust the "black community" (i.e. Howard and his ilk) as an ally in their fight against endemic crime. Rarely do witnesses to a crime give police information. Lawful and justified arrests are followed by protests and riots. Cops being ambushed and shot by blacks nearly every day.

Find ways to earn the cops' trust and they may just trust you right back.