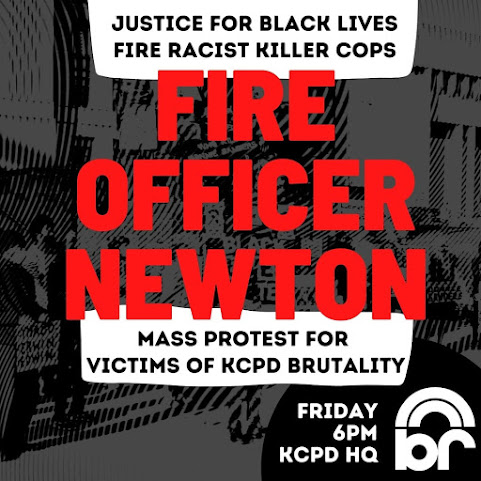 In just a few moments social media activists relaunch their activism against the KCPD as weekend resistance against law enforcement becomes more personal AND begins to call out members of the KCPD by name.

What's even more interesting is that activists are making a connection betwixt the controversial murder of Donnie Sanders that has been handed over to the Missouri Highway Patrol AND the curb stomping incident which has sparked weeks of protest. 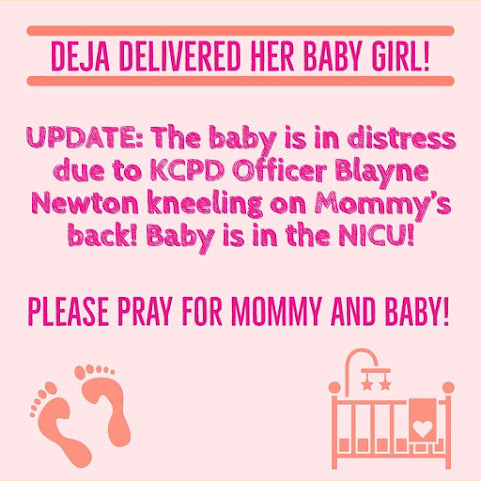 I think the more important question here is: How much is this costing Kansas City?

There's real crime that we need to address and these protesters are siphoning all of the resources.

Without question, sincere prayers for the innocent baby, however we doubt that the child's condition has anything to do with the brief encounter with the police officer. Mama has no one but herself to blame for the entire incident.

What BS, NICU my ass, fake news, I'd have stomped her womb so hard that fetus would have shot right across Prospect.

Oh, that sweet glow of motherhood. Wait, I see, it was the glow from the gas station at 3:00 AM. Sorry. I'm also sure she was watching her diet, not smoking or doing drugs. Just out for an early morning exercise walk.

We have to stop pandering to the lowest common denominator of society, namely the brain washed democratic supporting free shit army. They are going to be the death of this once great country. MAGA indeed. Look around tax prayers were are going to get more and more screwed if you all continue to vote for demoncrats.

Excerpted from a lengthy article written in:

“I believe that the only way that we can understand the apparent non-interaction between “them” and us is to hypothesize that they are deliberately avoiding interaction and that they have set aside the area in which we live as a zoo.

“The zoo hypothesis predicts that we shall never find them because they do not want to be found and they have the technological ability to ensure this. Thus this hypothesis is falsifiable, but not, in principle, confirmable by future observation."

If we are indeed being observed, particularly around 12th and Oak, or the House of Representatives, I too would avoid all contact with us, especially democraps.

but.. it's still good for a welfare check increase

Pray for mommy and baby? What about daddy? Or does mommy even know which ghetto rat is the father?

I'm praying for the baby. She didn't ask to be born into this. I really feel terribly sad for that child.

I just think i will puke

This is a leadership issue. Fire that worthless East Major Doug Niemeier who has allowed East patrol to become an out of control unit. He’s fucking worthless. Get him the fuck out of there.

Officer Newton is out of East Patrol? If so, we would love to send him kudos for a job well done each and every day. Thank you sir for your service. You have our full support!

It’s probably in the nicu because it’s going through crack withdrawals so.

I hope the commie red star has the guts to write that story when it finally comes out.

Sad to see such little regard here even from an infant, a shame.

Most decent people only wish well for a baby!

Free kc, and these are the same people who have murdered a dozen or more “babies” this year alone, you truly are a stupid mutha fucka aren’t you.

When the baby was born and it realized that it had a black crack head whore baby momma it went into immediate shock!


How about we fire racist killer blacks first.

The baby is in the NICU because the mom is a drug addict. Crack babies have a tough time of it. Too bad for the kid but it is going suffer more being raised by this human detritus of a mother in the long term. I hope CPS takes the kid and puts him in a good home.

Baby of a violent woman who assaulted a police officer, before she was taken into custody, discovered to have traces of marijuana and methamphetamine in it's blood.

Stacy Shaw and BLM radicals claim police somehow planted the drugs on the baby while in-utero. "It was probably an undercover cop who snuck in there" said Shaw, with a straight face.

Asked if she was using her anti-police activism as a springboard to run for the KCMO Council, Shaw took the 5th, stating she did not wish to embarrass or incriminate herself.

This is the fakest news in KC today. Many kids have issues and spend time NICU, many times it is precautionary in nature. This woman and her lawyer are playing everyone about the extent of any injuries for "MO Money". She needs to be arrested for interfering with the arrest that was in progress.

This baby would have been in distress the night of the so call incident if that fact were really true. The baby is in NICUI for other reasons as I have been told. Lets see if the Red Star will print that story or not.

We hope that that officer sues the bej*sus out of Stacy Shaw, "mama", and whoever else for slander and libel. He was simply doing his job.

Watch that video! He responded appropriately to an out of control female! Darkness, 3 AM and the 'hood were aggravating factors.

Do these officers need to measure their bellies FIRST? Check for embryos? Is there a policy?

The officer had to make split second decisions, given the circumstances forced upon him, as he has probably done thousands of times before.

9:28, why would he bother to sue two human turnips?

To get their BS on record for future prosecutorial evidence and licensure revocation efforts, generally keep'em busy, deplete their time and resources... And "human turnips"? You're being far too charitable. Exhaust and deter. Those two are straight up ...., IMO.

The breeder is real Mother of the Year material. I say breeder because no decent woman, 8 mos pregnant, that cares about her unborn baby is going to be on the streets in the middle of the night doing anything that is cause for arrest, then resisting arrest the way that it did. She doesn’t deserve one red cent in damages, and should be grateful that the taxpayers are picking up the tab for the bill she and her offspring are accruing now.