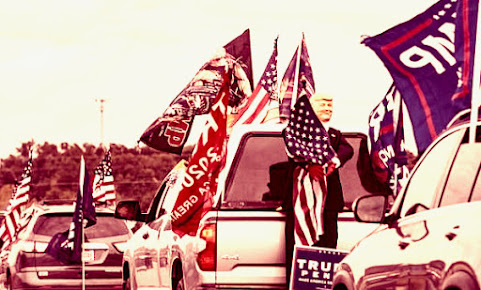 This weekend we talked about the Prez Trump parades and noticed that local right-wing denizens feel short changed.

Not One Mask In Sight

Rally held in Overland Park for President Trump and police

OVERLAND PARK, KS (KCTV) -- It was a busy day in Overland Park as many people showed their support for law enforcement and also the president of the United States. Car after car and person after person filled the Overland Park Plaza off Metcalf and 119th for the Support the Blue event.

KANSAS CITY, Mo. - Supporters of President Donald Trump made their presence known Saturday in Overland Park, while the St. Louis couple who pointed guns at protesters earlier this year spoke at a related event.

All things considered, this is worthwhile coverage but Prez Trump supporters don't seem to be very happy.

Here's the word that has earned support from social media fans of the conservative cavalcade:

"They didn't tell their viewers there is one every weekend until the election in Kansas City. Surprise! Local media is trying to ignore the Parades, knowing every time they report on them -- they are getting bigger."

They're already getting ready to cry over the election they're losing.

And still nothing on that monstrous parade for Biden today?

Yeah, what about that Riden with Biden parade? Are they not showing anything about that because nobody showed up or because they gays were embarrassing?

Good turnout, great parade. Nothing to be angry about!

3:27, you still don't get it: Trash Biden all you want, we're voting against Donald Dumbass, Swamp Monster.

and yet Biden will still lose. Weird.

^^^We're? Is the mouse in your pocket registered too?

That's your problem 3:42. The Democrats offer nothing to vote for.

Does anyone know what joepedo's policies are... besides mass illegals, late term abortions, cowtowing to china, sct court packing and enriching hunter?

invite stacy shaw next weekend to the next ralley

The parade people don't realize that their nastiness and hate just gives people another reason to vote against Trump.

In Kansas and Missouri Trump is the Winner. The Midwest Voters will not Vote for a Candidate that has Destroyed the Country for 40 years. Sleepy JOE will get some far left voters. But American Voters know Sleepy JOE is corrupt. WHERE IS HUNTER. HUNTER lives in the Hollywood Hills Renting a 11 thousand dollar a month Home. Enjoy the Show .

and our Biden cheerleader is against Trump but not for Biden. Weird. Typical liberal.

Biden is a defective product.

Biden is the Swamp Thing

3:46: And yet has given us plenty to vote AGAINST. Weird.

And yet Biden will still lose in a landslide. Weird.

Biden would lose in a one man election.

All Democrats are not pedos but all Democrats agree voting for a pedo who sniffs little white girls is not a deal breaker.

The “media” doesn’t care to broadcast, let alone acknowledge, racist White Supremacist rallies. I don’t blame them. I wish the MAGATS would be rounded up at these Clown Car Parades and shipped back to Russia where they belong. Fucking CHUDS.

How many Governor’s you planning on kidnapping and murdering this week, filthy MAGATS?

And look at him go! Weird.

Oh,my! 4:45 IS triggered, isn't she?
Didn't get lucky at the Biden rally.
All of the sequins fell off of her rainbow.

Trump didnt wear a mask. Niether did Herman Cain. Where is Herman now? Rotting is the answer. Trump doesnt wear rubber when having sex with sex workers

As said the lying ass clown who knows
nothing about the Antifa and BLM members who orchestrated the kidnapping. Stay knowledgeable and classy Dems. You’re about to lose again!

Chimpy is pissed tonight. Biden parade was a fail.

What a witty comeback! You Libtards are so smart. Keep hiding in your basements and don’t vote. Actually none of you are smart enough to vote.

So, Tony, your previous post was based on an entirely false premise since both of these stories were posted to KCTV and KSHB's websites yesterday?

What a fucking shitass you are, then.

Chimpy how was that Biden parade? Did you smoke any poll there or were they all angry fat girls?

Looks like it was at the top of the newscast.

MAGAT MELTDOWN with only 25 days left. Vote him out! Lock him up!

Here’s hoping Trump serves his lengthy prison sentence at Leavenworth. I’ll personally organize a Locked Him Up parade, bring thousands of happy 2020 voters, and Donnie will hear us honking for hours through his cell window. Glory!

I'm just surprised that many trump supporters still have their license.

Now that both the KKK and Taliban endorsed Trump, are they setting up membership registration booths at these KC Clown Car parades? Can any MAGAT immediately make an annual pledge and join? Should a prospect bring cash or will credit cards accepted?

At a Dem rally I asked over 75 different people what Biden’s accomplishments were - top 3- in his 40 years of gov’t.

No one was sure. Most went to talking points of hating Trump.

And there you have the Democratic Party.

^^That is sooo weird! I asked over 2000 Trumpkins what his accomplishments were and not one could name anything! Plus I counted about 15 teeth among them! So gross!

I work for a finance company and personally repossessed five trucks at this rally. These rallies are terrific for my business. Can’t wait for the next one!

Trump used NO RUBBER on Stormy Daniels. He sure is brave!

I voted for Obama, but now the Democrats have become the party of lies, lawlessness, abortion (even after the baby is born), violence destroying once great American cities, high taxes on our paychecks to pay for socialist wet dreams, weak military, open borders, free healthcare for illegal aliens at taxpayer expense, defunding the police, sanctuary cities, sending millions of taxpayer dollars to Iranian radical leaders so they can kill more of our troops, stacking the Supreme Court, and more idiotic ideas. No thanks.

Imagine Trump on top of Stormy Daniels having missionary style intercourse without a rubber. How messy. Now you know what Melania imagines all the time. She has thought about it 10,000 times.