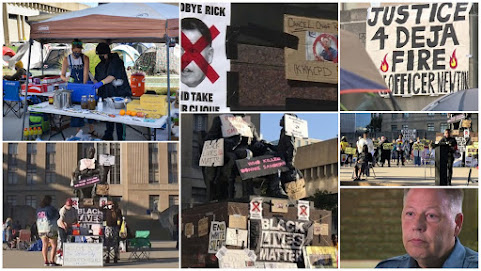 Objectively, after four days of protest activist Stacy Shaw and her followers have earned very little support in their effort to oust KCPD Chief Rick Smith.

The mayor downplayed their efforts, the top cop doesn't seem concerned and whilst council welcomes anything that distracts the public from budget cuts . . . They haven't signed on to the "movement" so far and only council lady Katheryn Shields offers tacit approval of the non-violent demonstration on city hall grounds.

For those of us with a memory, this episode takes us back to the old school Occupy KC movement that devolved into brutal infighting, a nearly month long stay in the park and a only a few tents cleared by authorities during lunch.

From a policy perspective, this effort won't force a Police Board commission vote on the Chief's removal and basically served as local MSM entertainment for a slow Monday.

Again, we respect non-violent demonstrations as a powerful form of advocacy . . . However, it's clear that protesters might have camped out in a political corner that won't facilitate change and they might soon have to pull up stakes.

To be fair, today the weather was BEAUTIFUL and this might be one of the best times to be outside and b.s. with comrades fellow unemployed workers friends.

KSHB: KCPD Chief Smith says he has no plans to resign

Fox4KC: Protesters demanding justice for pregnant woman arrested on the ground by KCPD

41 Action News: Kansas City protesters vow 'not to be ignored any longer'

hard to distinguish one set of homeless from the next.

Send the covid patients out to greet them

Why don't they occupy a few vacant homes on the east side and do us all a favor!

Big money going against the protesters.
Watch the headlines change.
Big changes coming and protesters won’t believe what big money and city has planned.
They are in over their heads.

move the bitches out!

Are they looking in several protesters backgrounds?
Look for a disbarment.

When will the anti protesters show up?

If you go back to the very start of the BLM nonsense in KCMO, NONE of the demands have been met, nor are they going to be.
Marches, riots, looting, arson, yelling and screaming, a "new self-appointed leader" almost every day, millions of police overtime and Lucas making a complete fool of himself.
Gwen Grant with her own silly show demanding that the feds stop "occupying" her community.
And NOTHING was accomplished.
Six "murals" which certainly won't last the winter.
And now a brand new "leader" with an increasingly pitiful rag tag crew with a new set of demands.
The whole charade has quickly digressed from tragedy to farce.
Time for some adults to let these clowns know the show's over.

^^^ I agree, it’s time the mayor put an end to this childish behavior. The taxpayers want somebody to stand up like a man and end it, you know, like a real leader would.

That’s a dame shame more dirty homeless in downtown kc. Feel free to drop them off some care packages of soap razors and a few job applications.

Has the fake dr Rex archer been down there to give these fools some masks? Somebody needs to make sure they’re not spreading the grip.

would you please just let loose the dogs

Can’t, the dogs are in the tents. And shitting on the lawn.

The NPR article states that they don't let anyone into "their" encampment without a temperature check, yet they are in a public park and only city government could limit occupancy at the park and/or implement requirements for entry. I wonder what Shaw and her ragtag band would do if we, as fellow citizens, chose to stroll through the park without submitting to her contrived rules?

It's chilly out there

have a smallpox blanket

hey as a black man, I am against the way police everywhere are so quick to use deadly force, but these protesters demanding the Smith be fired without due process is wrong.

The pregnant woman had no business whatsoever injecting herself and baby into that situation. BLM really needs to be careful with trying to uphold people out on the streets who a clearly wrong. BLM is wasting political capital on these kind of bogus protests.

Drive by with cans of wasp spray, help the cops out.

There People's City sounds better than Chaz, Chud, or whatever the hell it was called. At what point do the protesters come to the idea that budget won't be cut 50% and top cop won't resign? Are they that stupid?

Are they that stupid?


ehh..in the pics ..most wearing masks..but you know these assholes don't have the self-discipline to wear them all the time..and they are spending a LOT of time together,

hope this becomes a "super-spreader"event.

Low IQ children should be supervised and not by someone only 10 points higher because of a segregated school law degree for ambulance chasing. She deserves all the criticism and ire thrown her way.

I agree with protest but this is kind of ridiculous they haven't said one wrong thing the chief is done. Was not at the scene and had nothing to do with the arrest. If they were more responsible they will call for further investigation and not just the same old screaming and ranting.

^^^^ I'm pretty sure you've never convinced anyone of anything in your life. I think that commenter means that he agrees with the idea of protest in general. He doesn't seem convinced but you're a schmuck and want to be right on a blog @1:34 in the morning. Loser.

Poetic justice and irony all rolled into one as City Hall gets shutdown because of the Covid outbreak on its lawn. ROTFLMAO! It could not happen to a more deserving bunch of people.

Ignoring them is the only good option. Not every squeaky wheel gets greased. Especially when the squeak is actually coming from a pig.