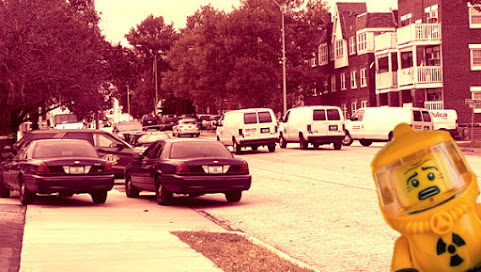 Follow-up on today's deadly use of force by authorities that added to the Kansas City quotient of misery . . .

First one of my favorite stories that seems apropos for Hallwoeen:

Did you know Hitchock was too afraid to drive? His vision was fine, obviously he had plenty of cash for a ride but he refused to maintain a license into advanced adulthood. The famous director played up his brand and offered this quote to newsies long during the golden era of Hollywood: “I don’t drive because I’m afraid of the police.” Today's deadly shooting will be ruled justified and doesn't add to this town's murder count, even if the horrific scene traumatized several urban core denizens this afternoon. To be fair, the dude/suspect also had a gun and fired at authorites. So the "justified" killing tag is merited.

Northeast News: Homicide suspect fatally shot by police at Admiral and The Paseo

They would have been more traumatized if the murder suspect threatened them or their loved ones. Think about it!

Cool, let's schedule the next public execution for your block!

Wow, when they took down those MLK street signs, Paseo got rough.

^^^ It was paradise before. How quickly you have forgotten!

7:06 hell yes they can do it on my block, I got cameras and can sell the footage!

Why do they always have to shoot to kill? Roy Rogers used to shoot the gun out of outlaw’s hand, every Saturday. They could have used the Taser. Something other than murdering him.

The neighbors call it disheartening? Another rat disposed of. I'd call that heartening.

Don't pretend to know about movies CHUD. Go stuff your face with donuts.

But Hitch was accused, not convicted.

So, the guy in the car fired first, and the police returned fire snd struck the shooter. The shooter later dief. Deems like a righteous shoot to me.

8:04: You don’t shoot people in the hand or leg. You aim for center mass. If someone is firing at you, you don’t shoot at him to piss him off. You shoot to stop him. Joe Biden’s crap about shooting people in the leg was ridiculous. Besides, hit a femoral artery and the guys likely a goner. Sounds like Joe’s been hitting Hunter’s crack pipe again.

Must have been a black dude. We Whiteys don't give a fuck when a criminal POS scumbag dies while trying to kill /hurt a cop or anyone else. That beez the difference. Weird

9:49 PM ?? WHAT BIDEN LEG SHOT ??? If you go back to his history interviews, Biden has stated that you can just tell a criminal to STOP !! Then they will not kill you , rob you nor rape your 12 year old daughter . Instantly, the would be killer /child molester stop his /her/its crime. Even stating that they will put down their weapon and stop their anger. The NPR tapes of fantasy. There are about a dozen Politicians that have stated likewise, like to see them walk the Streets I have. Weird

Oh lawd! When the candle vigil gonna be?

"Oh, you don't want to go to jail? Go on dude, sorry to have bothered you. Would you be so kind as to commit your next murder in another jurisdiction? Thank you very much and have a nice day."

Anybody with a problem with this based on the facts given is an idiot.