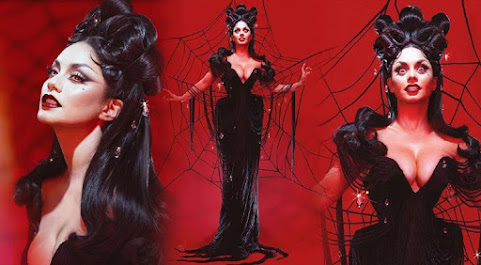 Behind the scenes we're playing a bit of catch-up but close readers of the blog deserve just a little something extra and so we share this collection of somewhat scary news links inspired by hottie Vanessa.

KANSAS CITY, Mo. - Kansas City, Missouri, Mayor Quinton Lucas met with the community a town hall Monday for his Reform Project KC initiative . Lucas plans to host a series of community meetings which he hopes "will guide Kansas City's ongoing work to build a safer community for all residents."

KANSAS CITY, Mo. - Lights, camera, action. This year, stepping on the runway means stepping into a KC Streetcar for one organization. Coalesce, a fundraiser to support local artists, is making some adjustments due to the pandemic. Organizers said 2020 has been a wild ride that's landed them on KC Streetcar stops.

The demands of keeping voters safe from the coronavirus and the high interest in this year's campaigns are making for an expensive election this year. On Thursday, Johnson County commissioners addressed some of those costs by accepting an $856,000 grant to help pay for equipment and for a $25-a-day stipend increase meant to encourage poll workers not to quit.

Vanessa Hudgens is facing backlash after posting a series of photos taken in New York's Sleepy Hollow Cemetery. The actor has also been criticized for calling the cemetery a "beautiful" location and describing it as her "happy place."


Prez Trump Packs Them In Despite Polls

Keen to appear lively and well after his recent hospitalization for Covid-19, Donald Trump held his first rally since being diagnosed, addressing a packed, largely maskless crowd in Florida - a state he desperately needs to win. California investigates unauthorized ballot boxes installed by Republicans "I feel so powerful," he boasted to his cheering supporters, 11 days after announcing his infection.

"This comprehensive data, in concert with the CDC's guidelines for removal of transmission-based precautions, have informed our medical team's assessment that the President is not infectious to others," Conley said in the memo. Although his medical team said late last week that the president was safe to resume public activities over the weekend, Monday was the first time the physicians backed up their assessment with testing results.

President Trump on Monday ridiculed Democratic presidential candidate Joe Biden for mistakenly saying at a campaign stop he's running "for the Senate" - and appearing to forget Mitt Romney's name. "'I'm running as a proud Democrat, for the Senate'. Sleepy Joe Biden today," Trump tweeted. "It's only going to get worse.

NEW BRUNSWICK, N.J. (AP) - A late-stage study of Johnson & Johnson's COVID-19 vaccine candidate has been paused while the company investigates whether a study participant's "unexplained illness" is related to the shot.

WASHINGTON - President Donald Trump used a White House proclamation to commemorate Columbus Day and to accuse "radical activists" of trying to undermine the Christopher Columbus' legacy. The proclamation, issued Friday, called on Americans to observe the holiday with "appropriate ceremonies and activities" and ordered that the American flag be displayed on all public buildings.

University of Missouri: Cheating up with more classes online

COLUMBIA, Mo. (AP) - More than 150 University of Missouri students have been caught using group chats to cheat on exams since many classes moved online amid the coronavirus pandemic. University spokeswoman Liz McCune said Friday that the school has identified three cheating incidents that each involved more than 50 students, The Columbia Missourian reports.

OLATHE, Kan. - More than 150 Olathe football players have been placed under quarantine due to COVID-19 exposure, the district said. A district spokesman said in the past week, four people associated with Olathe's five football teams have tested positive for the virus. As a result, because of the high level of interplay, practices and [...]

It's been warm and even occasionally windy the last few days. Those conditions will continue through most of Sunday as we're back into the 80s, but we finally see a return to fall as this cold front to our northwest works its way into the area tonight.