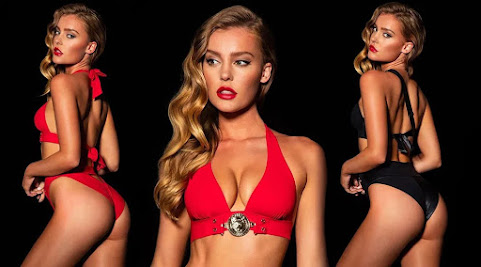 Right now hottie model Georgia and her body of work inspires this peek at pop culture, community news and top headlines for tonight.

Kansas City has 6,500 lane miles in the city street system. That's enough to drive from New York City to Seattle and back, with miles to spare. The city has a lot of work to do on its roads. Last winter's pothole plague and constant roadwork make that obvious.

The development team behind a $178 million mixed-use project marking the entrance to Lee's Summit has landed a magnetic restaurant tenant. Lee's Summit planning staff currently is reviewing a preliminary development plan for a Shake Shack, within the Streets of West Pryor development, documents submitted to the city show.

Georgia Gibbs showed off her amazing figure on Wednesday, October 14, when she treated her 711,000 Instagram followers to a series of snapshots of herself clad in a tiny string bikini as she enjoyed an early morning dip in the ocean. The three-part slideshow featured the Australian model radiating joy at the beach.

subscribe to The NPR Politics Podcast podcast The Senate has voted to confirm Amy Coney Barrett to the Supreme Court, just about a week before the general election and 30 days after she was nominated by President Trump to fill the seat of the late Justice Ruth Bader Ginsburg.

Prior to becoming a prominent backer of Donald Trump, Kayleigh McEnany praised then-Vice President Joe Biden as "funny and likable" and a "man of the people" who resonates with "middle class voters."

Then-Democratic presidential nominee Hillary Clinton sent an infamous tweet on Oct. 26, 2016 with am image of herself as a young girl captioned, "Happy birthday to this future president," and the four-year anniversary of the message has sent critics to social media to mock the former first lady.

More than 16.82 million people tuned into Sunday evening's "60 Minutes" episode featuring interviews with President Trump and Joe Biden, according to preliminary Nielsen ratings. Why it matters: It's the largest audience for a television broadcast, excluding multi-channel and sports programming, since the Academy Awards on Feb. 9.

President Trump's son-in-law and senior adviser Jared Kushner is facing some sharp criticism over what his detractors believe was a textbook example of a lack of self-awareness.During a Fox News interview on Monday, Kushner, speaking about Black communities in the United States, said his father-in-law

really. I don't have any injuries. Toe announced here. So, um all in all, a good football game. I was impressed with all three phases and the job that we did, they're all three phases contributed. They overcame some things offensively and defensively.

KU to allow around 1,500 fans at Allen Fieldhouse

LAWRENCE, KS (KCTV) -- A limited number of basketball fans are expected to be allowed into Allen Fieldhouse when the season begins, the University of Kansas confirmed on Monday. An email went out to season ticket holders on Monday, saying that about 1,500 fans will be allowed in games this season.

THROUGH LATER ON TONIGHT FOR US TEMPERATURE-WISE PRETTY STEADY FOR A WHILE SNOW IN AND OUT NOTP VISIBILITIES ARE CONCERNED AND BY 9 O'CLOCK. WE'LL BE DOWN TO 29 DEGREES. SO FOR THE EVENING HOURS JUST BE CAREFUL. THERE COULD BE A LITTLE BIT OF REFREEZING.

He's right, of course. If blacks were serious about success, they'd be born into a rich but crooked family of New York real estate developers.

Taking bets whether or not she finds a pubic hair on her can of Coke.

"And on the Eighth Day the American People kicked his lying ass out the door."
(From the Book of Trump, Chapter the Last)

Don't worry, Ivanka is going to dump Jared and go to work as a Spokesmodel for Goya Refried Beans after the Election.

The Devil went down to Georgia
He was lookin' for a heart to steal
He was in a bind for a fine behind
And he was willin' to make a deal
When he came across this young woman
Decked out in a bikini and smokin' it hot
The Devil jumped up on a hickory stump
And said, "Georgia, can I get a pump???"

So 1,500 people can attend a basketball game at a left-wing university but Lucas and Archer want to shut the churches down in Kansas City.

There is no rhyme or reason to government bureaucrat decisions regarding corona virus.

Wear a mask, wash your hands, assess your own risk tolerance for going out and wait on the vaccine is all we can do.

This is a man-made disease by Communist China that mutated across the world like wild fire. This disease either accidentally or intentionally was released from their Wuhan bio lab.